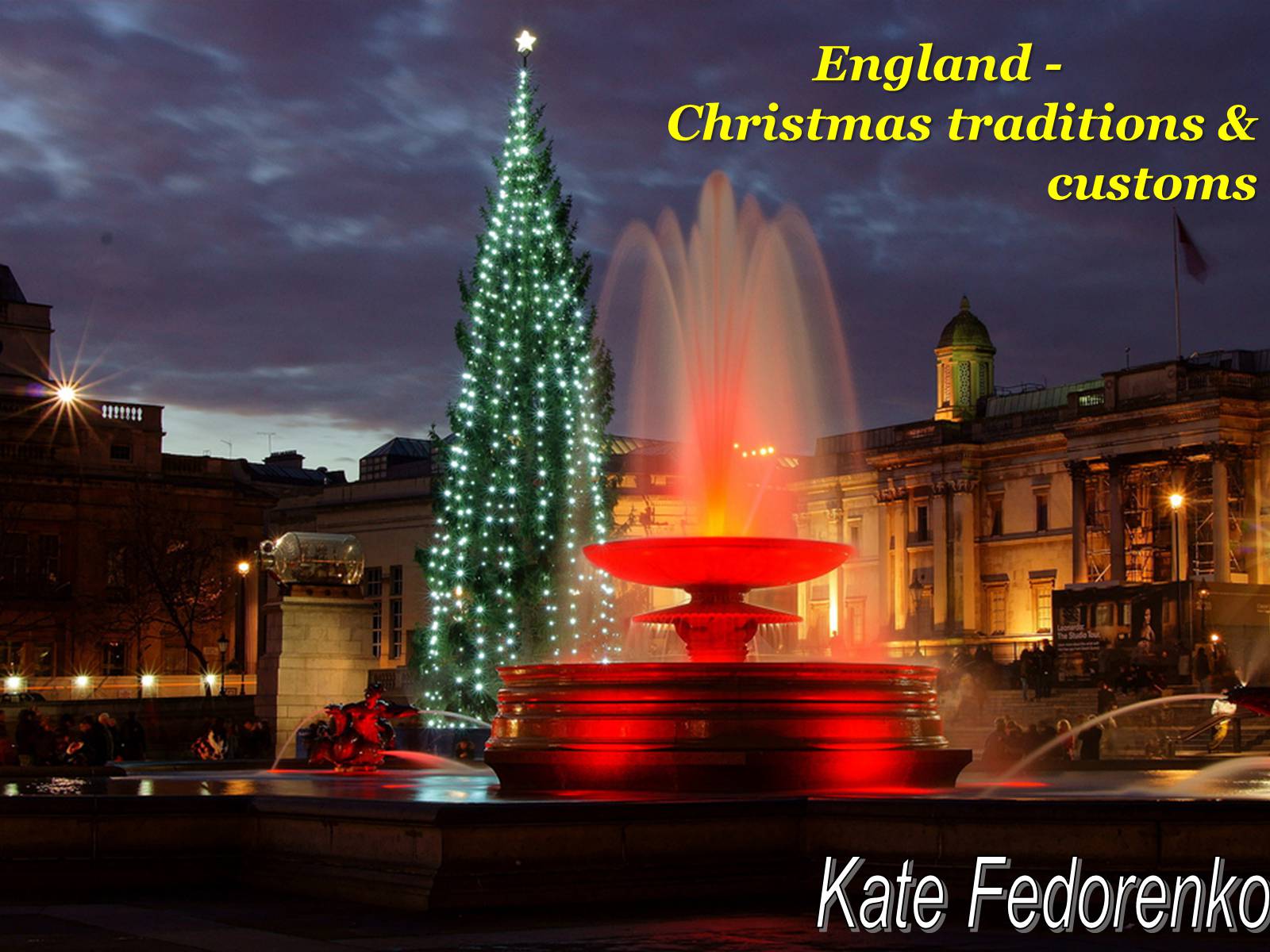 The English enjoy beautiful Christmas music. They love to decorate Christmas Trees and hang up evergreen branches. Red and green are the traditional colours of Christmas.
Green represents the continuance of life through the winter and the Christian belief in eternal life through Jesus. Red symbolizes the blood that Jesus shed at His Crucifixion. Many Christian homes will have a nativity scene. The baby Jesus is added on Christmas Eve.
One of England's customs is mumming. In the Middle Ages, people called mummers put on masks and acted out Christmas plays. These plays are still performed in towns and villages. 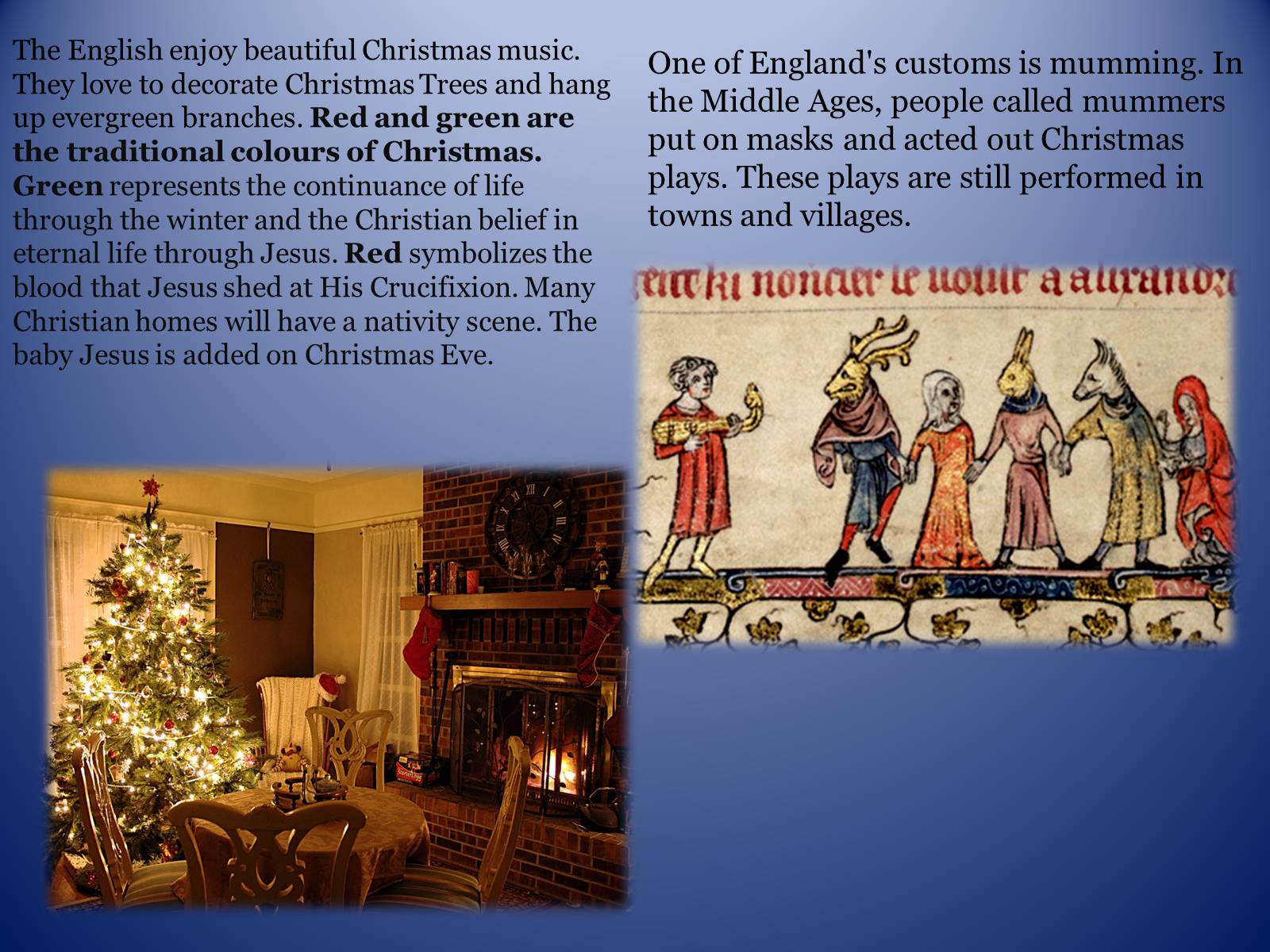 What are Christmas Carols?
Christmas carols are special songs which are sung during the Christmas season. The songs are about Jesus and the time when he was born. What does the word 'carol' mean?
The word carol comes from the ancient Greek 'choros', which means "dancing in a circle," and from the Old French word'carole', meaning "a song to accompany dancing".
Over the years, the word 'carol' changed its meaning, referring only to certain kinds of songs, the word carol became known as Christmas songs. 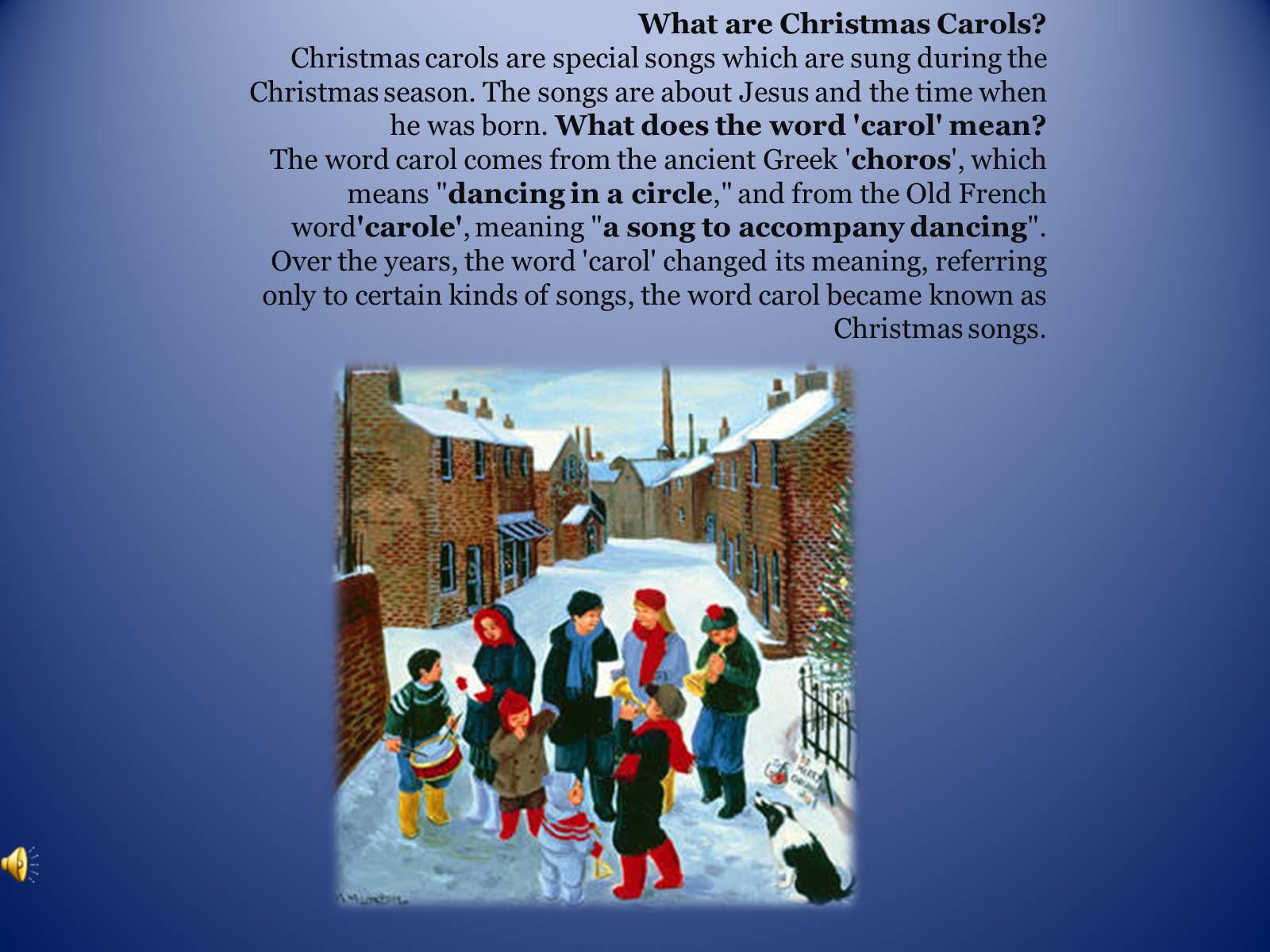 The English gift giver is called Father Christmas. He wears a long red or green robe, and leaves presents in stockings on Christmas Eve. However, the gifts are not usually opened until the following afternoon. 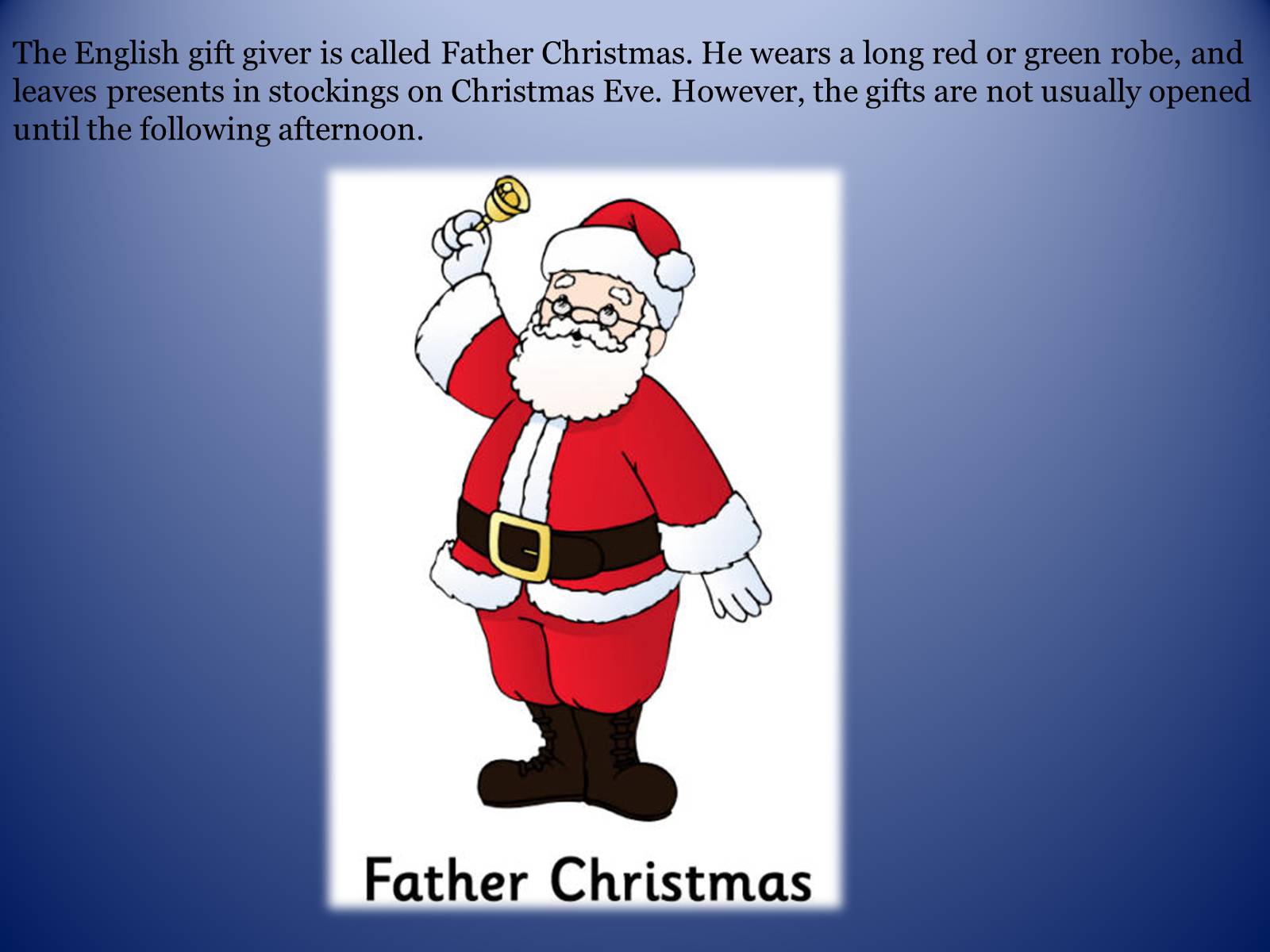 In England Christmas dinner was usually eaten at Midday on December 25, during daylight.In England, the only thing that people ate on the day before the feast was Frumenty, which is, was a kind of porridge made from corn. Over the years the recipe changed. Eggs, fruit, spice, lumps of meat and dried plums were added. The whole mixture was wrapped in a cloth and boiled. This is how plum pudding began.In England the traditional Christmas dinner is roast turkey with vegetables and sauces. For dessert it is rich, fruity Christmas pudding with brandy sauce. Mince pies, pastry cases filled with a mixture of chopped dried fruit. 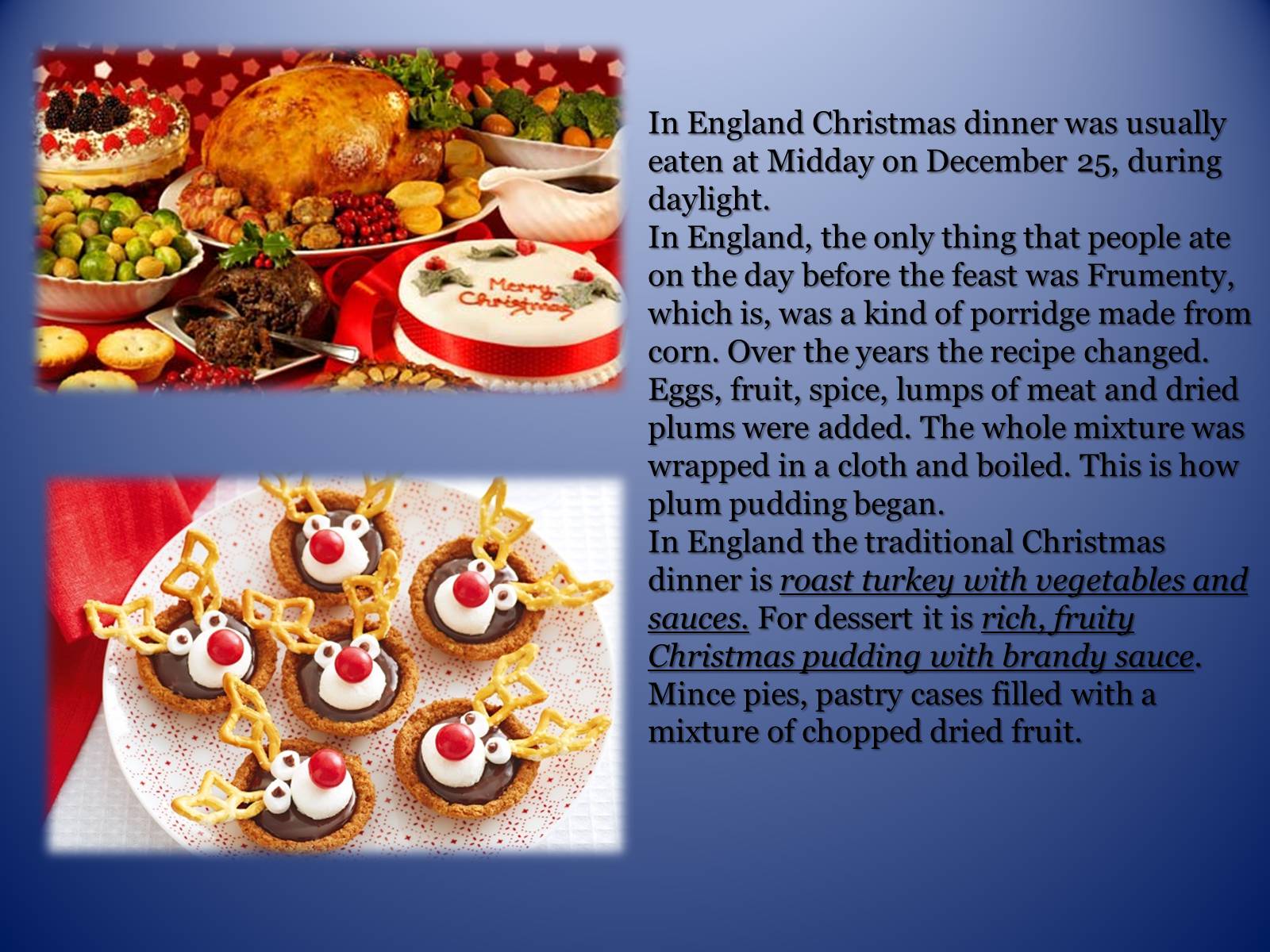 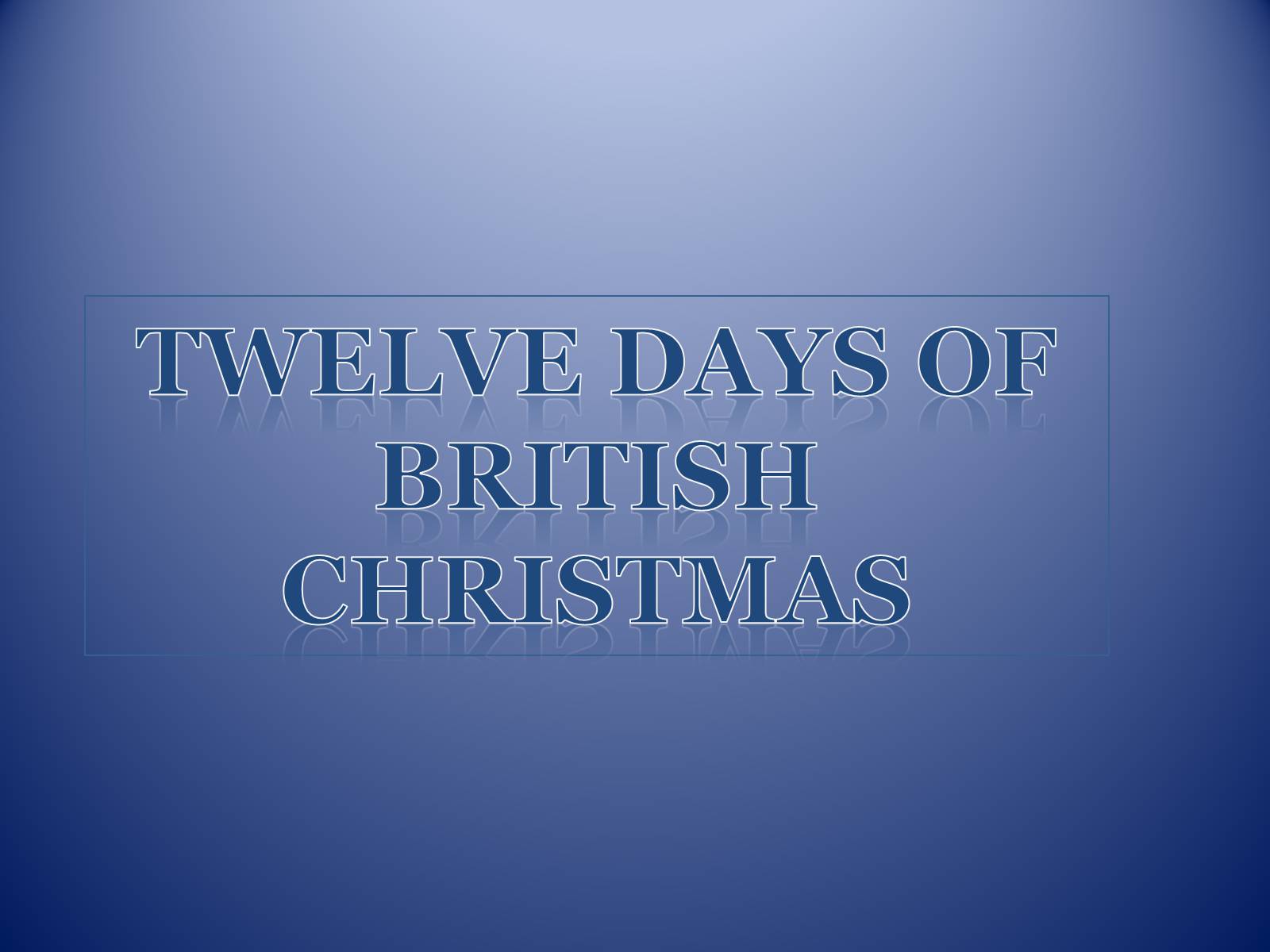 Trafalgar Square Christmas tree
The most famous Christmas tree in the UK is the giant tree in Trafalgar Square. The tree is a gift from Norway to the people of the UK as a token of gratitude for British support of Norway during the Second World War. Every year since 1947, Norway ships over a spruce tree that the British ceremoniously decorate with white lights. 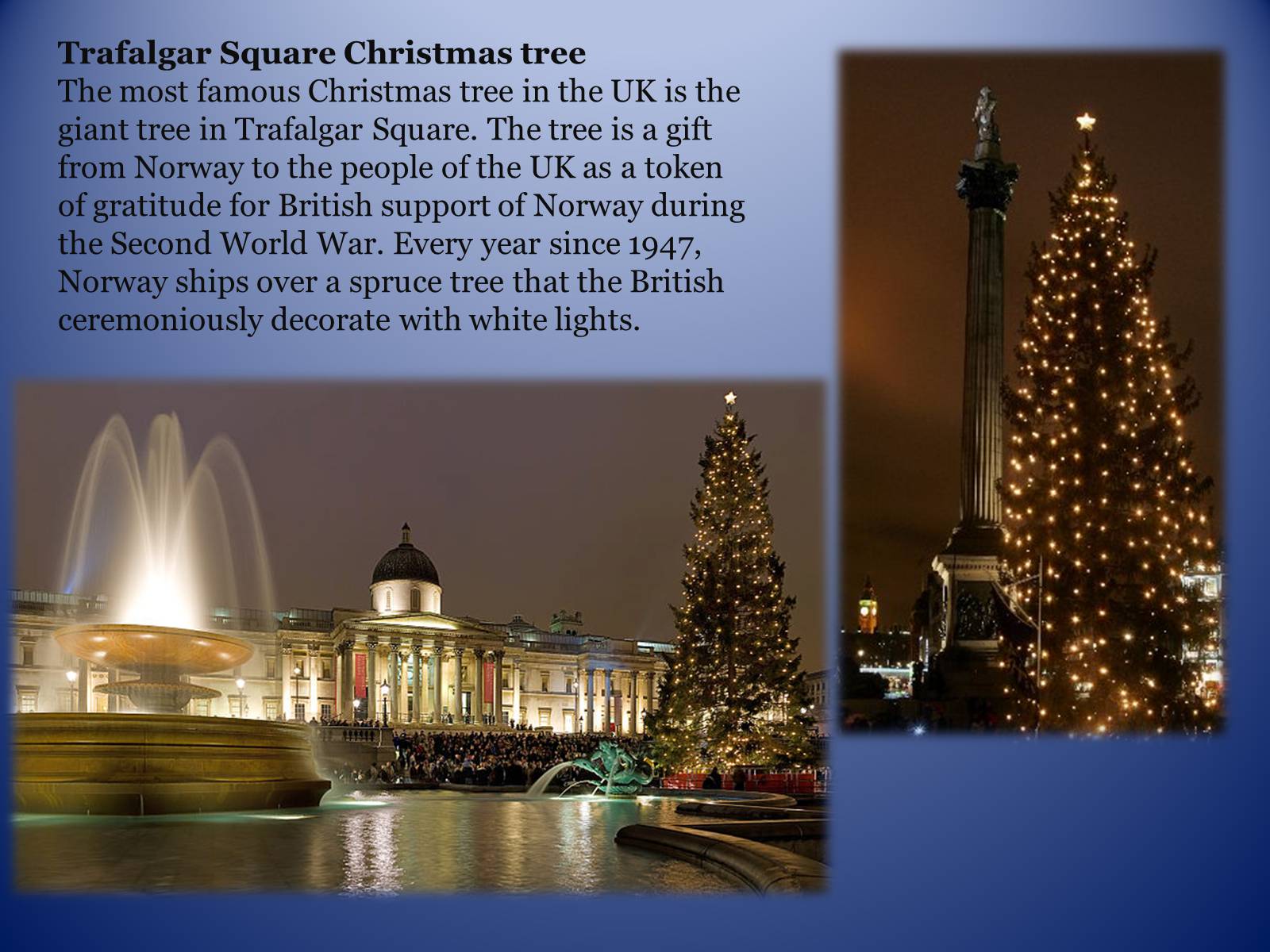 Christmas pantomimes
Crazy costumes, audience participation and cross-dressing all in one performance! What more can you ask for? Pantomime season in the UK begins around Christmastime. The audience always gets excited at pantomime performances, cheering for the heroes and yelling angrily at the villains. The tradition of pantomimes comes from medieval mummers plays, in which men acted all the parts in a silent play with a moral theme for noble households. Today, pantomimes sometimes even feature famous pop stars or TV personalities. 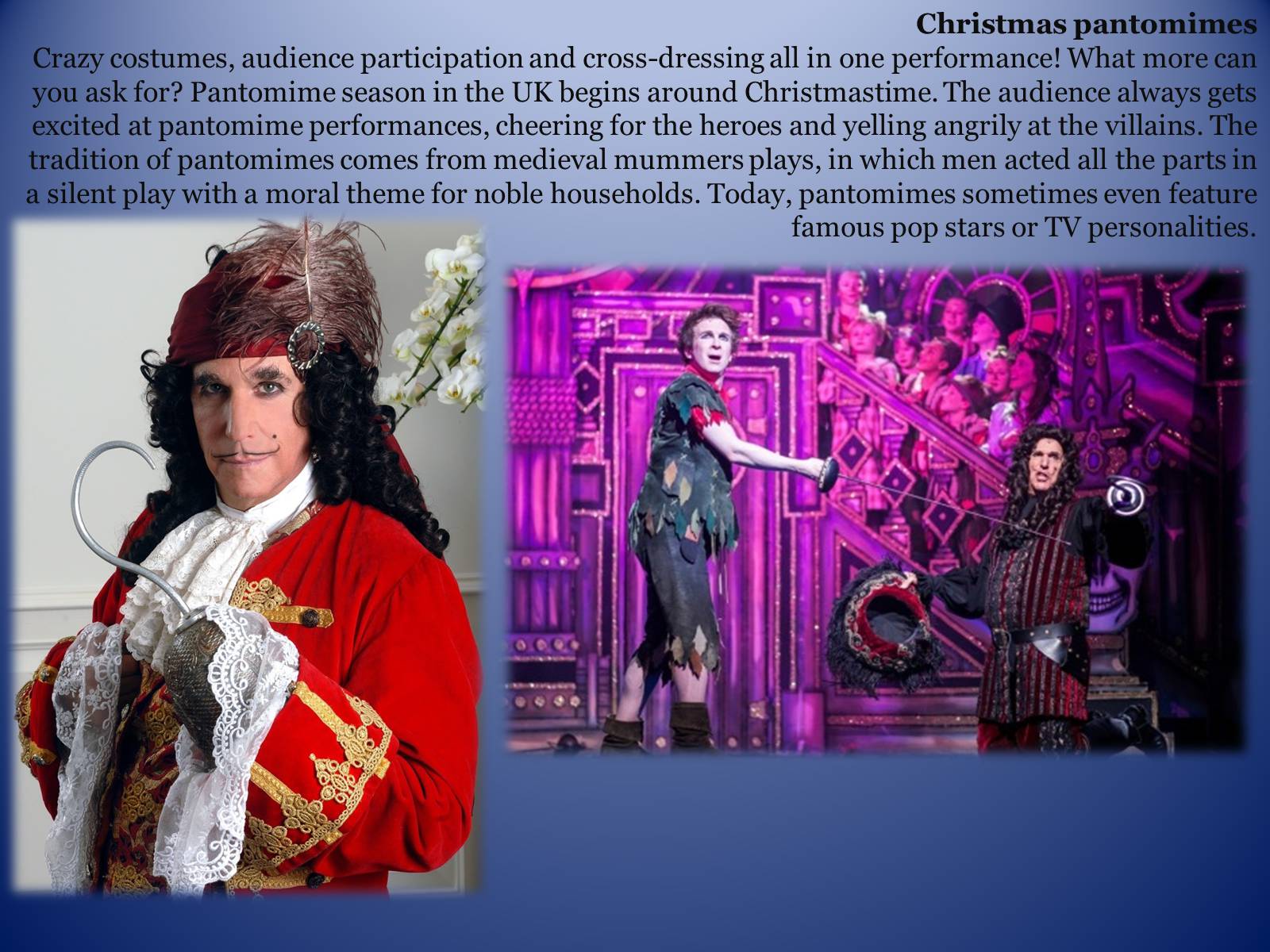 Wassailing
“Here we come a wassailing among the leaves so green…”
You could actually sing this popular Christmas carol when you go wassailing. Wassailing is just a fancy way of saying caroling. British families began wassailing in the Middle Ages, to share holiday cheer and good wishes for the coming year. The wassailers used to bring good wishes and a wassail bowl filled with spiced ale. In exchange, the residents of the house would provide food and drink. The wassail bowl was passed around and everyone took part in carols and good wishes for the coming year. 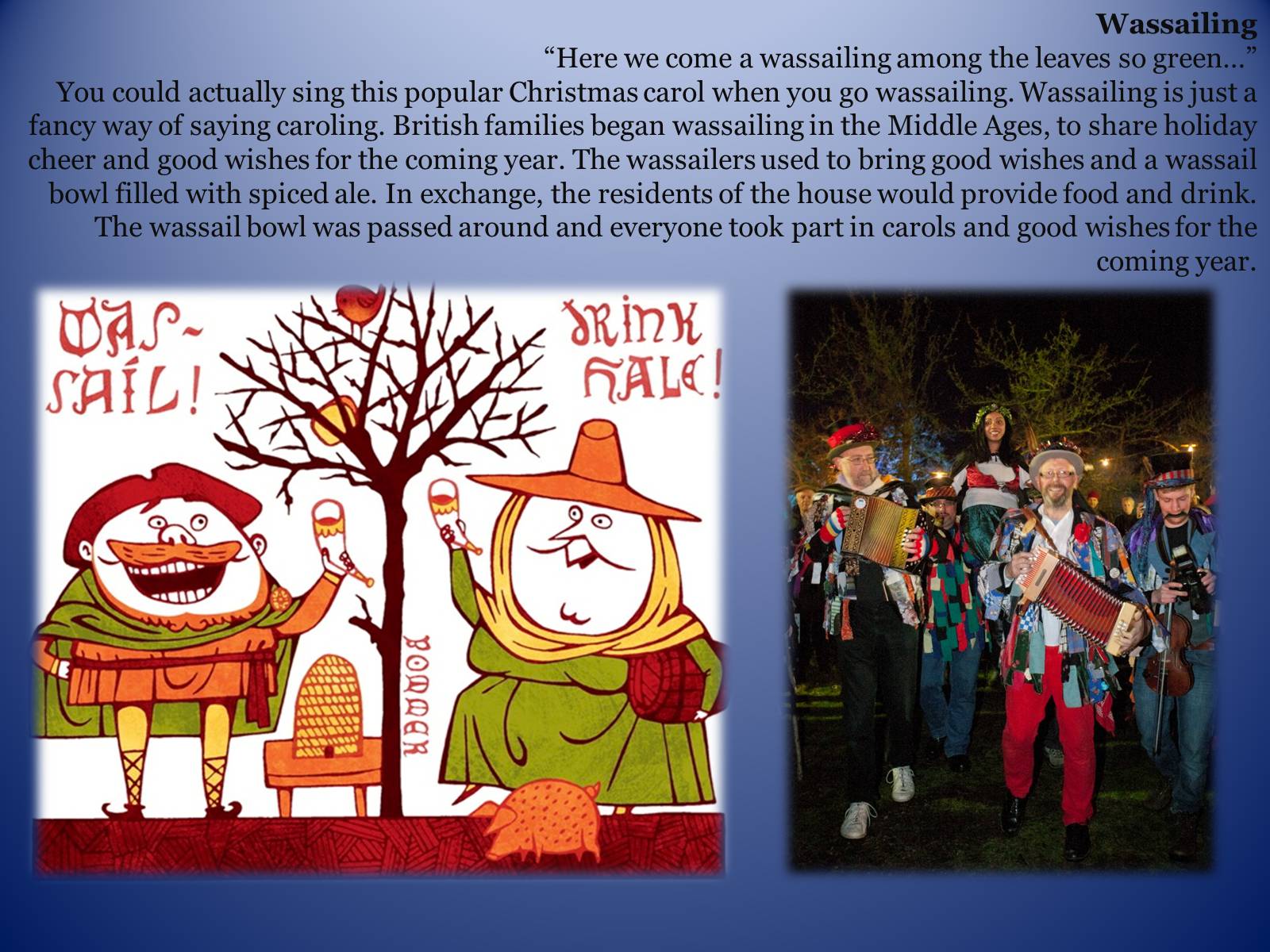 King's carol service
Every year families gather to listen to the Christmas Eve carol service performed at the King's College Chapel in Cambridge. The BBC has broadcast the service on the radio every year since 1928. It now airs on the BBC World Service as well, so people listen all over the world. The choir of boys always sings “Once in Royal David's City” first, and there is always a new, commissioned carol.
Leaving drinks for Father Christmas
While some children leave cookies and milk for Santa Claus like in the US, it is quite common in the UK to leave something a little stronger for good old St. Nick. Many families leave a glass of whiskey, sherry or brandy, along with a heartier snack, like a mince pie, made of fruit and spices. It's a long, cold night for Santa, so they like to give him something to keep him warm. 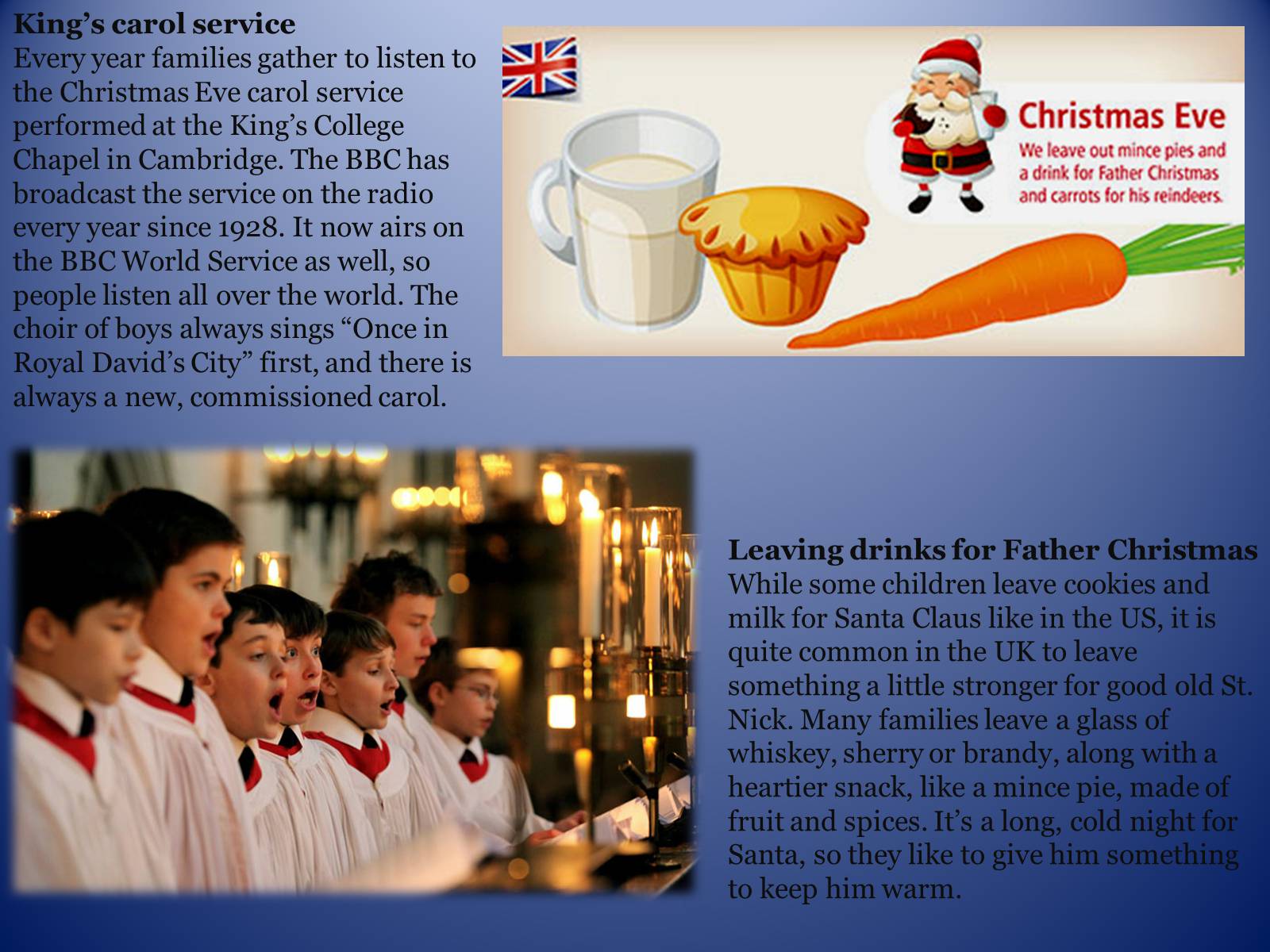 Yule log
Brits used to stay warm by the Yule log during the cold Christmas season. The Yule log was a large piece of wood that was burned in the fireplace as part of the holiday celebrations. Traditionally, it would be decorated with ribbons and dragged into the house ceremoniously. Once it was lit, it would be kept lit throughout all 12 days of Christmas. If you could keep the log burning, it would bring warmth, prosperity, blessings and good luck all year long.
Christmas pudding
Most British families have their own recipes for a Christmas pudding, all of them varying a little. It's essentially a mixture of dried fruit and spices, which is then steamed instead of baked. Many people cover it in alcohol and set it on fire to make a grand entrance. It often has small tokens or coins inside, and the lucky eater who finds the token in his piece is guaranteed wealth or good luck in the coming year. Just like fruit cakes, Christmas puddings keep for long periods of time without going bad. 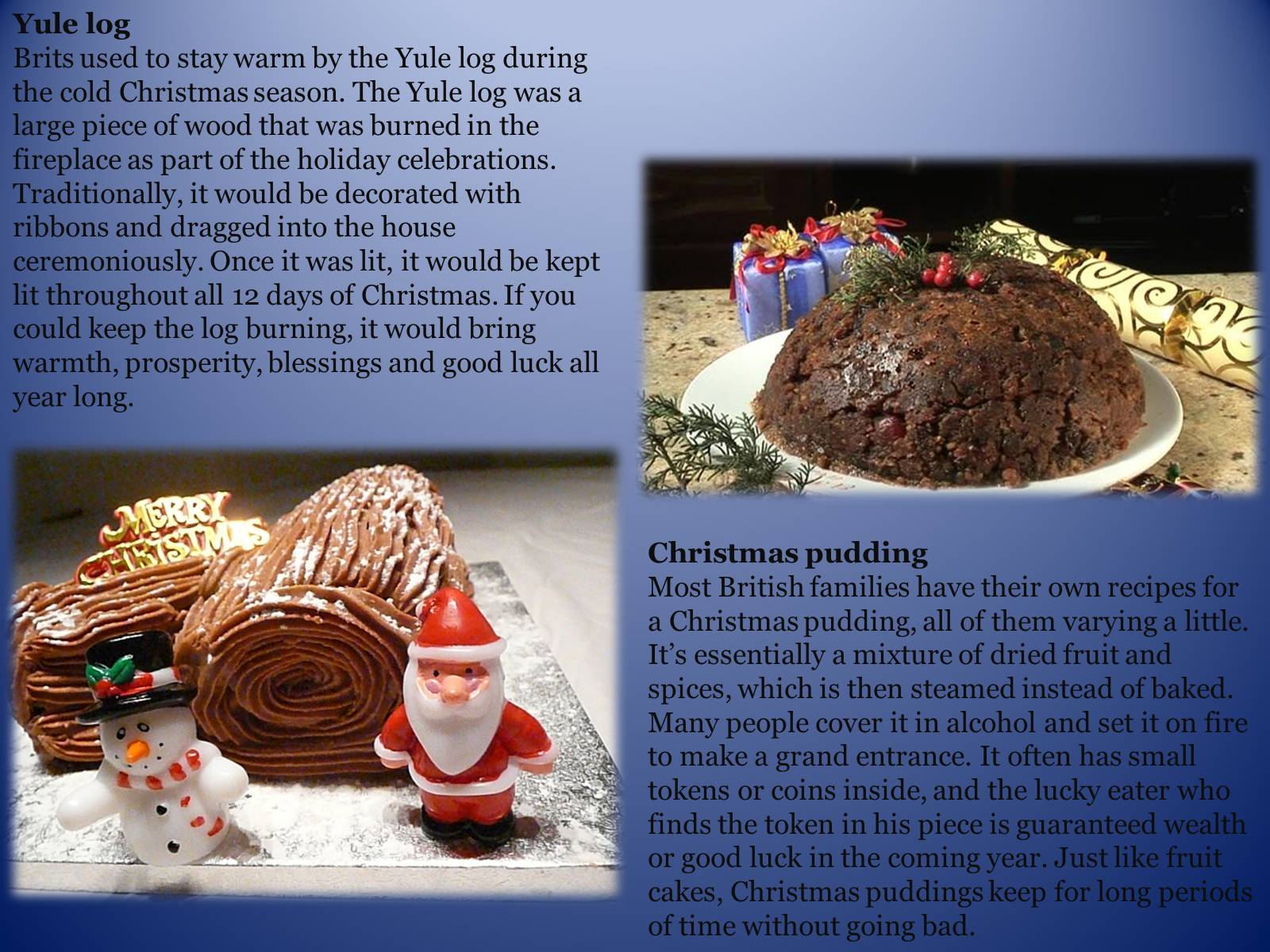 Christmas crackers
Popping open a Christmas cracker to find a surprise is a very popular British tradition, because it was invented in the UK! In 1847, a British candy-maker traveling in Paris got the idea from the way bon-bons were wrapped. Now, British families usually pop Christmas crackers on Christmas Eve or Christmas day. The crackers make a loud pop when opened and usually include small toys, jokes and paper crowns.
Posset
This one might not be so popular anymore… and it's not hard to tell why. This traditional British drink is made with hot milk curdled with spiced ale or wine. Not exactly a tasty treat by today's standards. Nowadays, mulled wine is a more common festive drink. 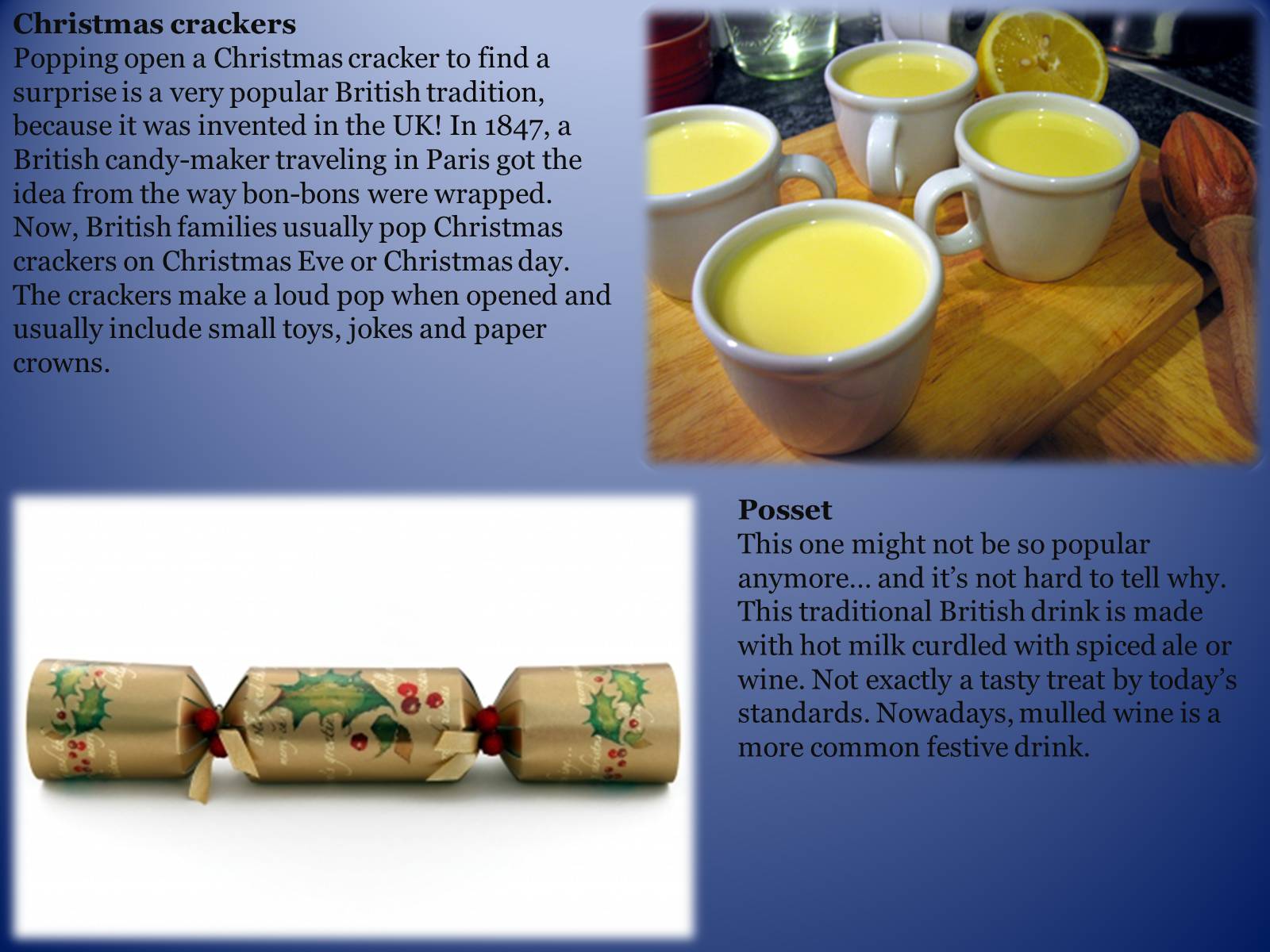 The Queen's Christmas speech
Many Brits never miss the Queen's Christmas Day speech at 3 pm every year. The speech has been broadcast on the radio throughout the British Commonwealth since 1932, on TV since 1957 and on a special YouTube channel since 2007. The Queen speaks about the milestones of the year for the British Commonwealth and her own feelings on Christmas. It is one of the few times throughout the year that the Queen speaks as she wishes without consulting any advisers. 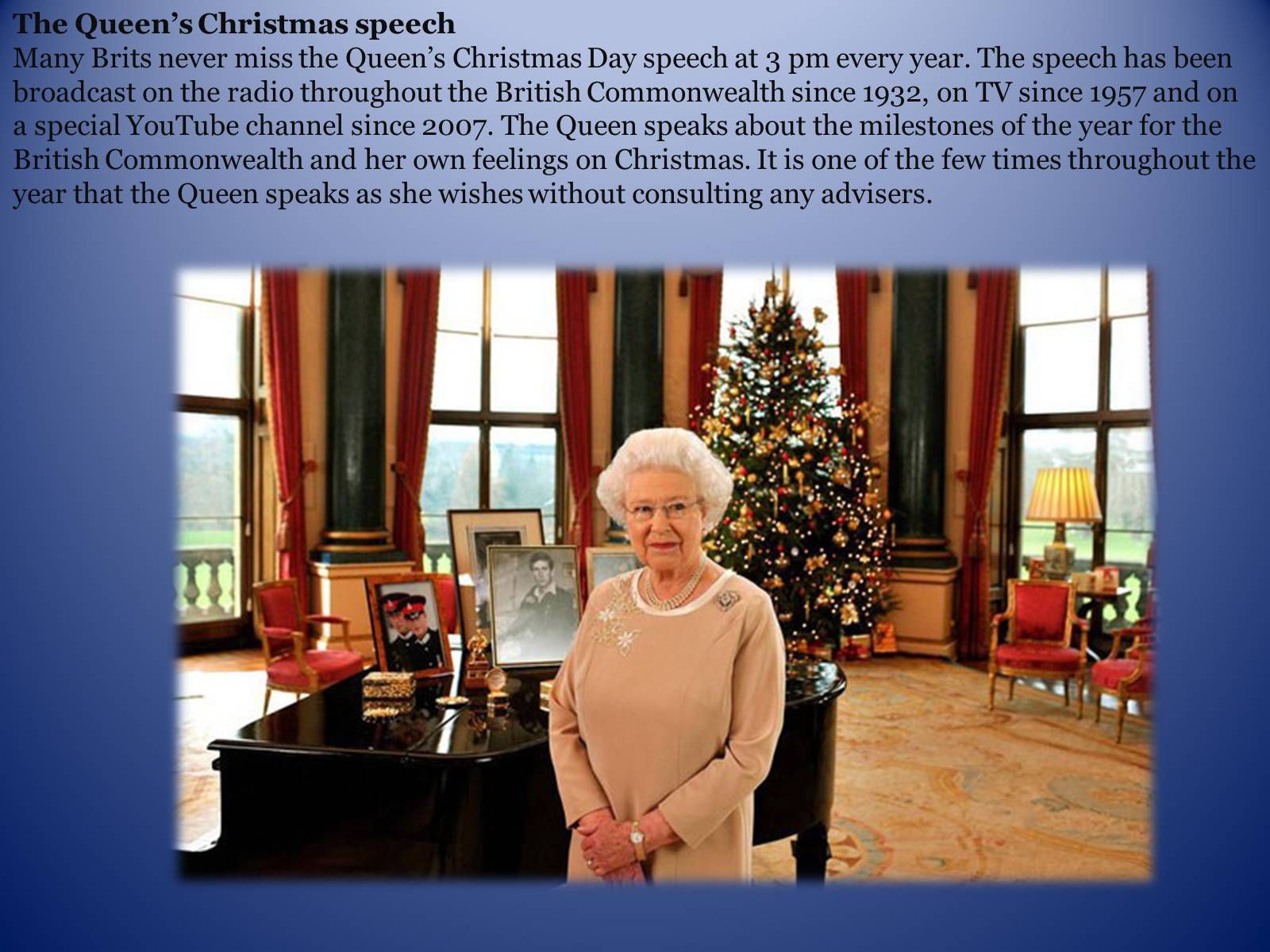 Boxing Day
Boxing Day is an extra day of celebration that falls the day after Christmas. Most people spend it quietly with their families, watching sports or movies and playing games, recovering from the busy holidays. It is also common to go for long walks in the countryside. It is becoming more and more popular for stores to have Boxing Day sales, so some people spend the day shopping, similar to the way many Americans go shopping on the day after Thanksgiving. 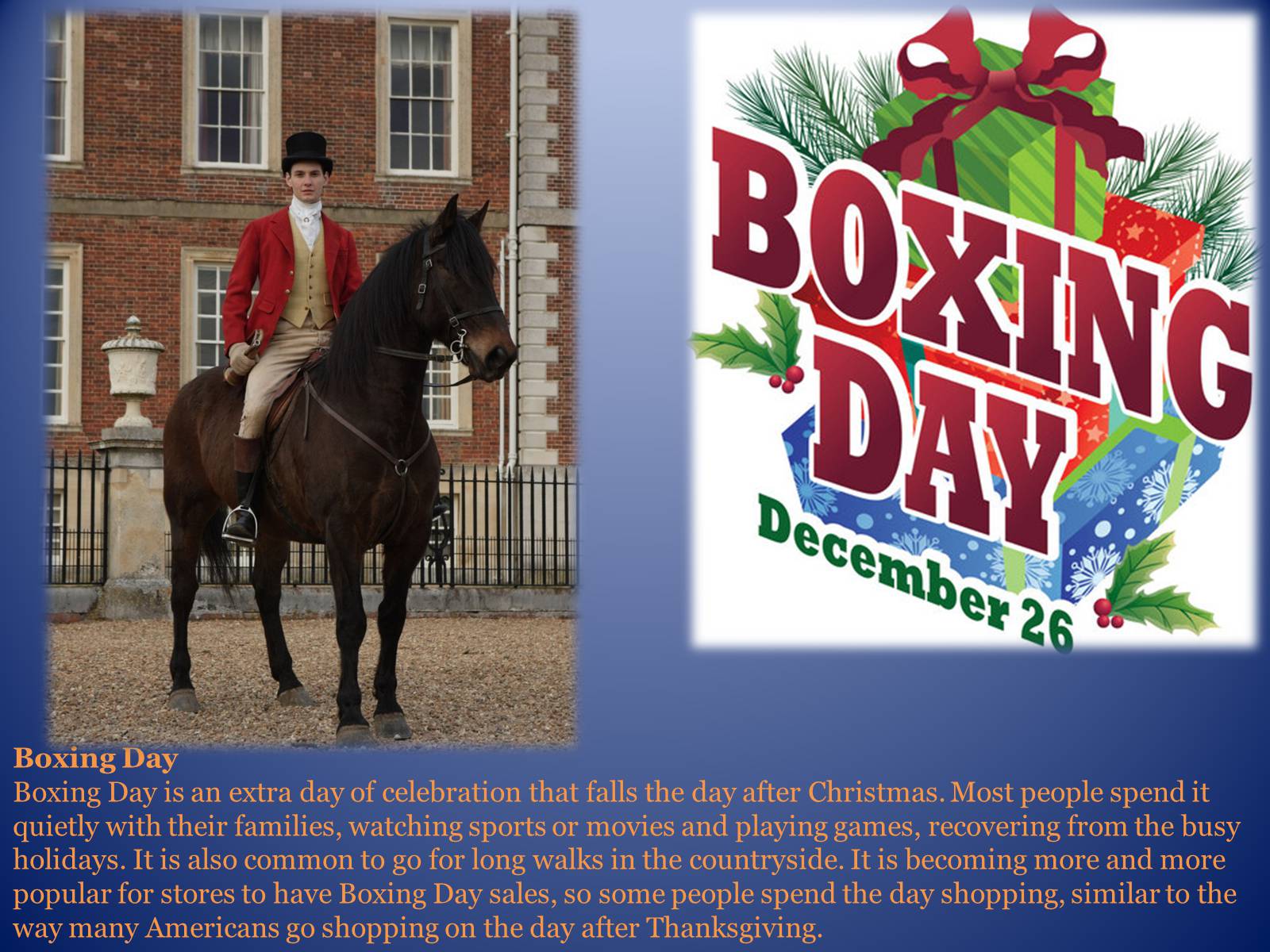 Hogmanay was originally a bigger holiday for most Scots than Christmas. It's their celebration of the New Year, which begins on December 31st and goes well into the morning January 1st. There are many different ways to celebrate, but most include parties and festivities well into the morning. One of the most popular customs is first-footing, in which people begin visiting each other's homes immediately after midnight. The first visitor to pass through a family's doorway brings luck to the home, and they usually bear gifts of whiskey, shortbread and fruit cake. The luckiest first-footer is traditionally a tall, dark man. 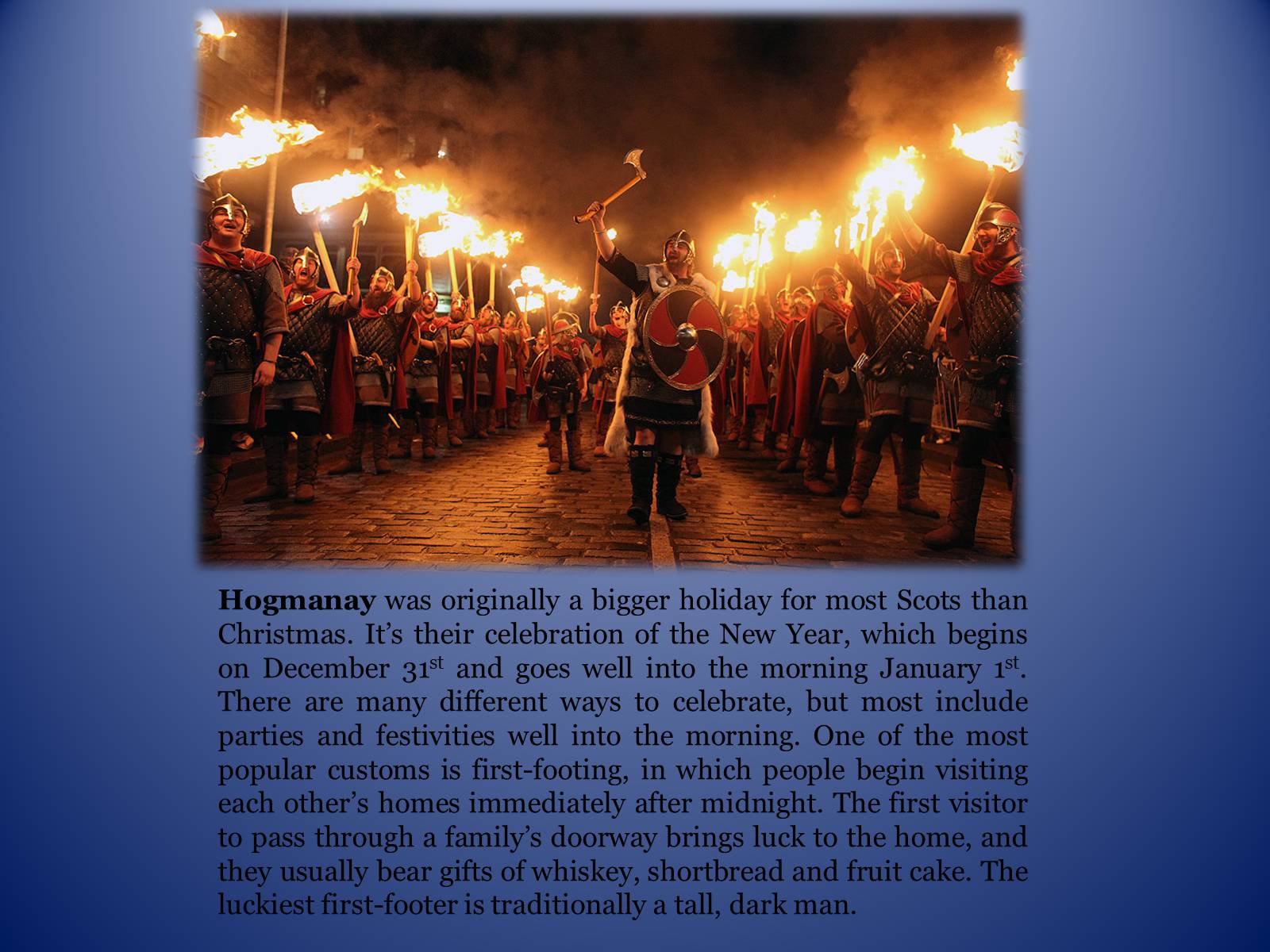