Presentation on Nottingham and Bristol 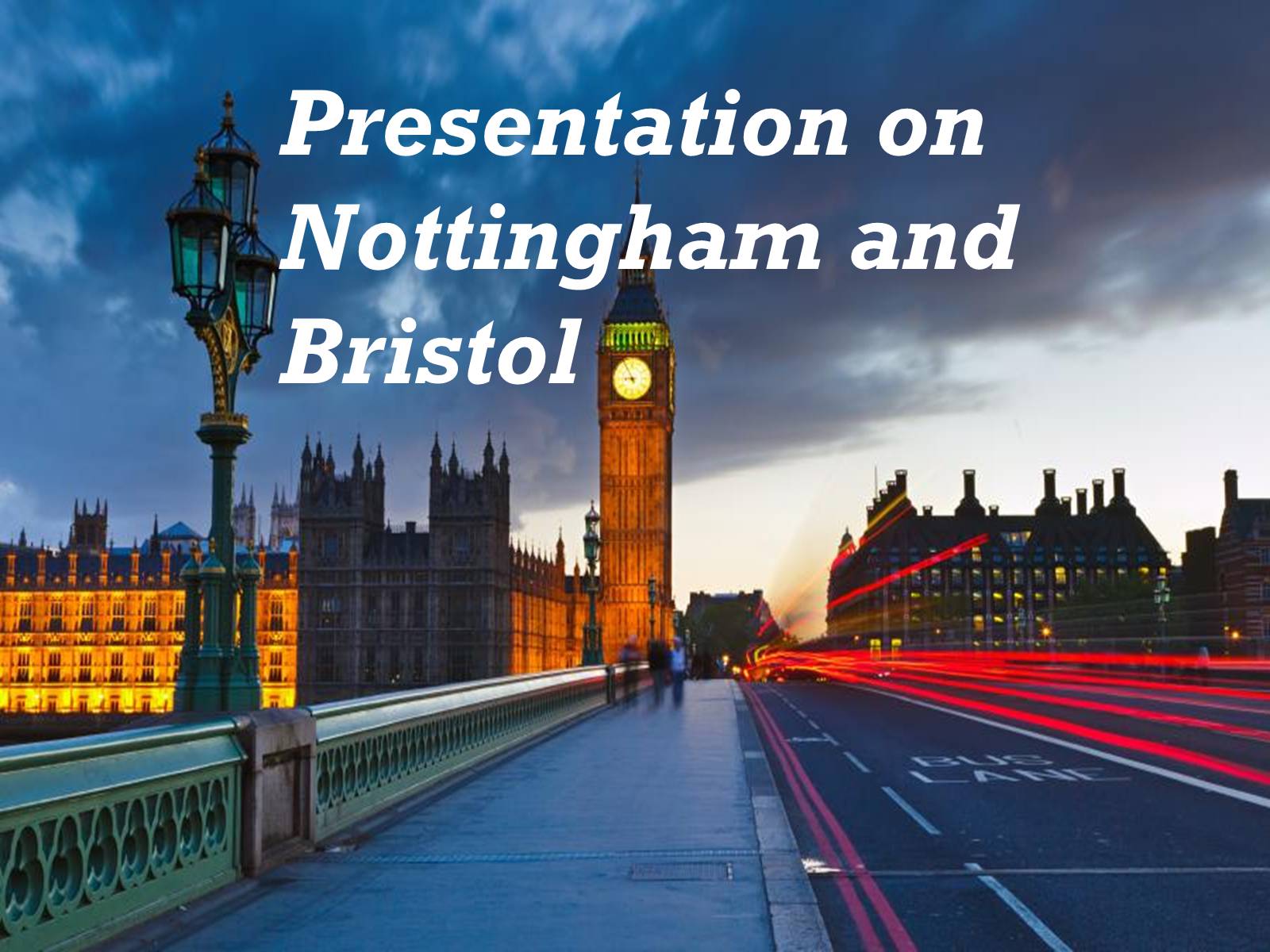 Nottingham
Nottingham - a city and unitary unit in the UK, in the ceremonial county of Nottinghamshire (England). Situated on the River Trent. 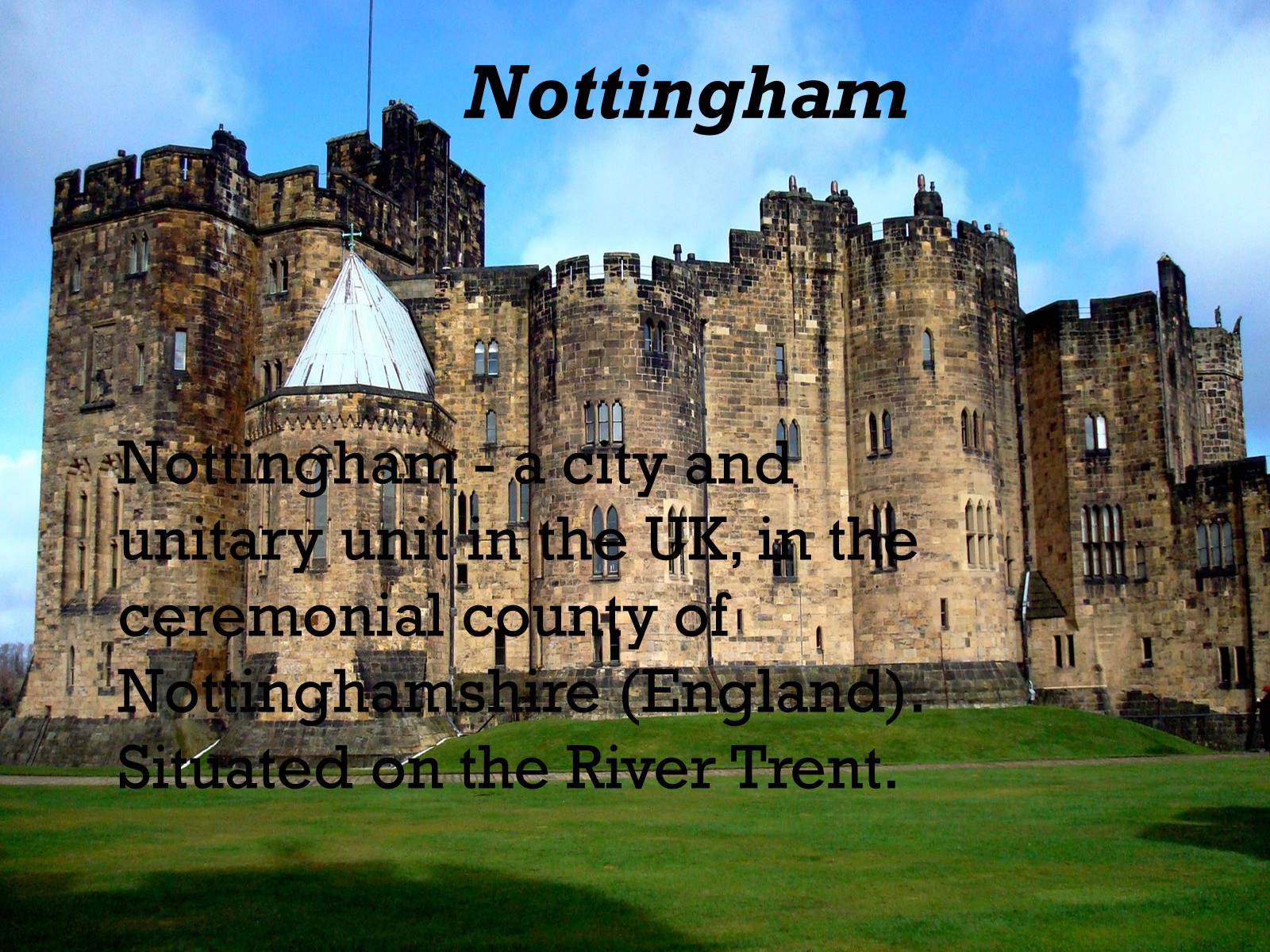 History of Nottingham
Nottingham was founded by Saxon settlers, about the VII century, then it won the Danes. In the IX century, it became one of five cities in the Danish law.
According to the official version, the name of the city in ancient times sounded like Snottingaham happened on behalf of one of the local leaders, Snot. Sound "s" at the beginning of the word was subsequently lost.
Nottingham city name associated with the origin of the legend of Robin Hood. The city is a monument to the famous highwayman.
There is a statue of Robin Hood in Sherwood Forest, where once lived a brave gang, robbing the rich to help the poor. 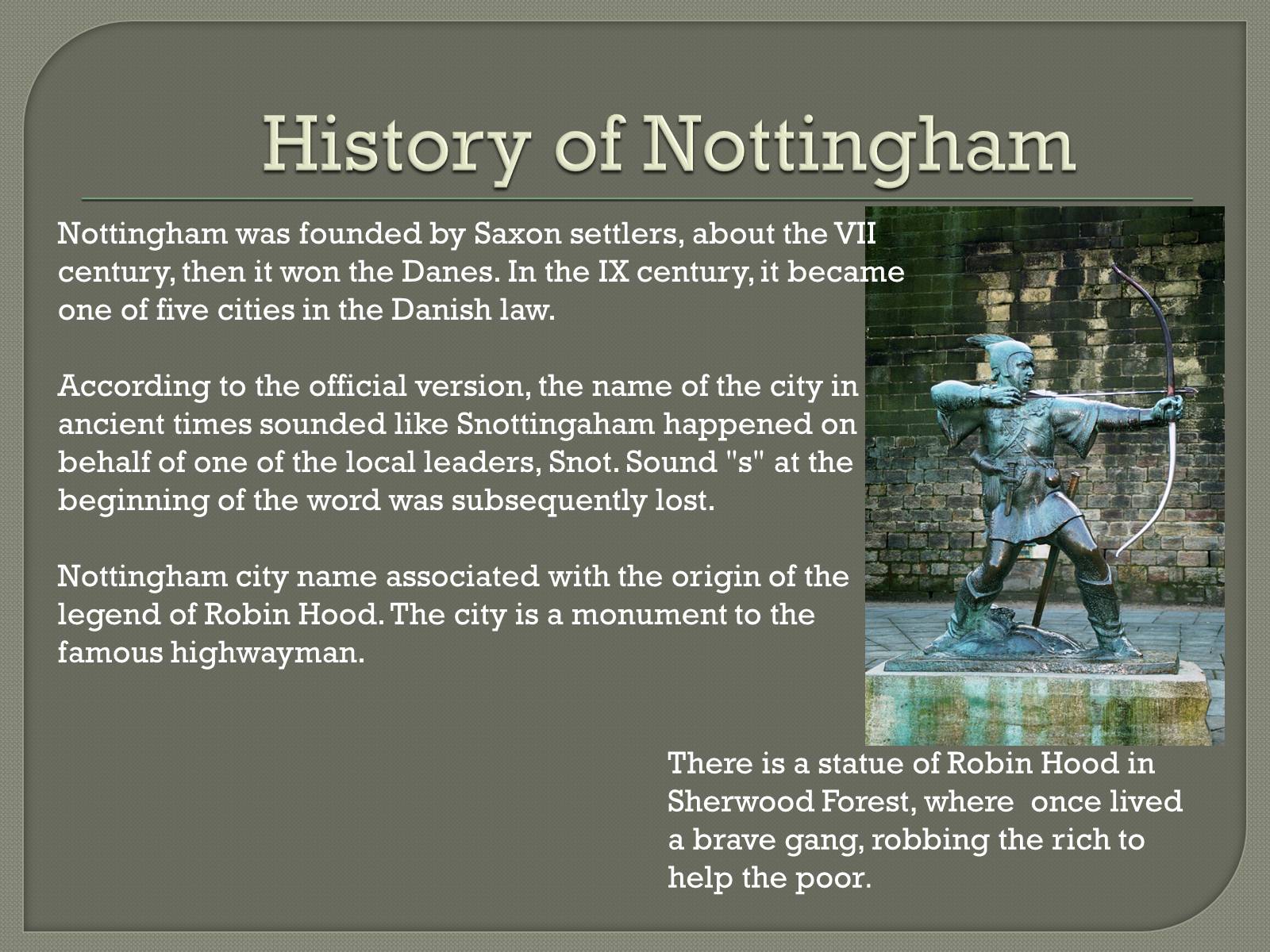 Education in Nottingham
The city is the University of Nottingham, which has branches in Malaysia and China. 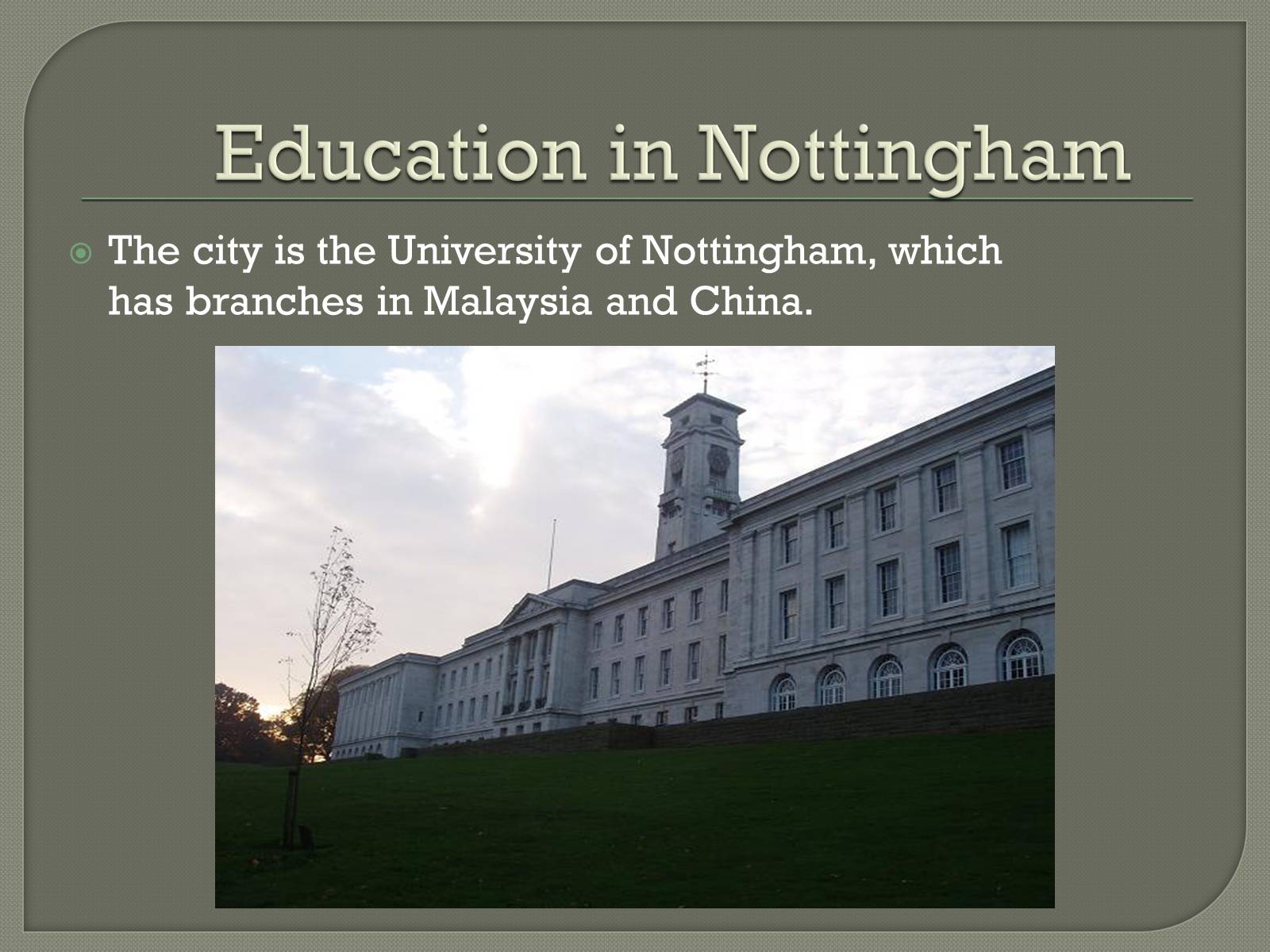 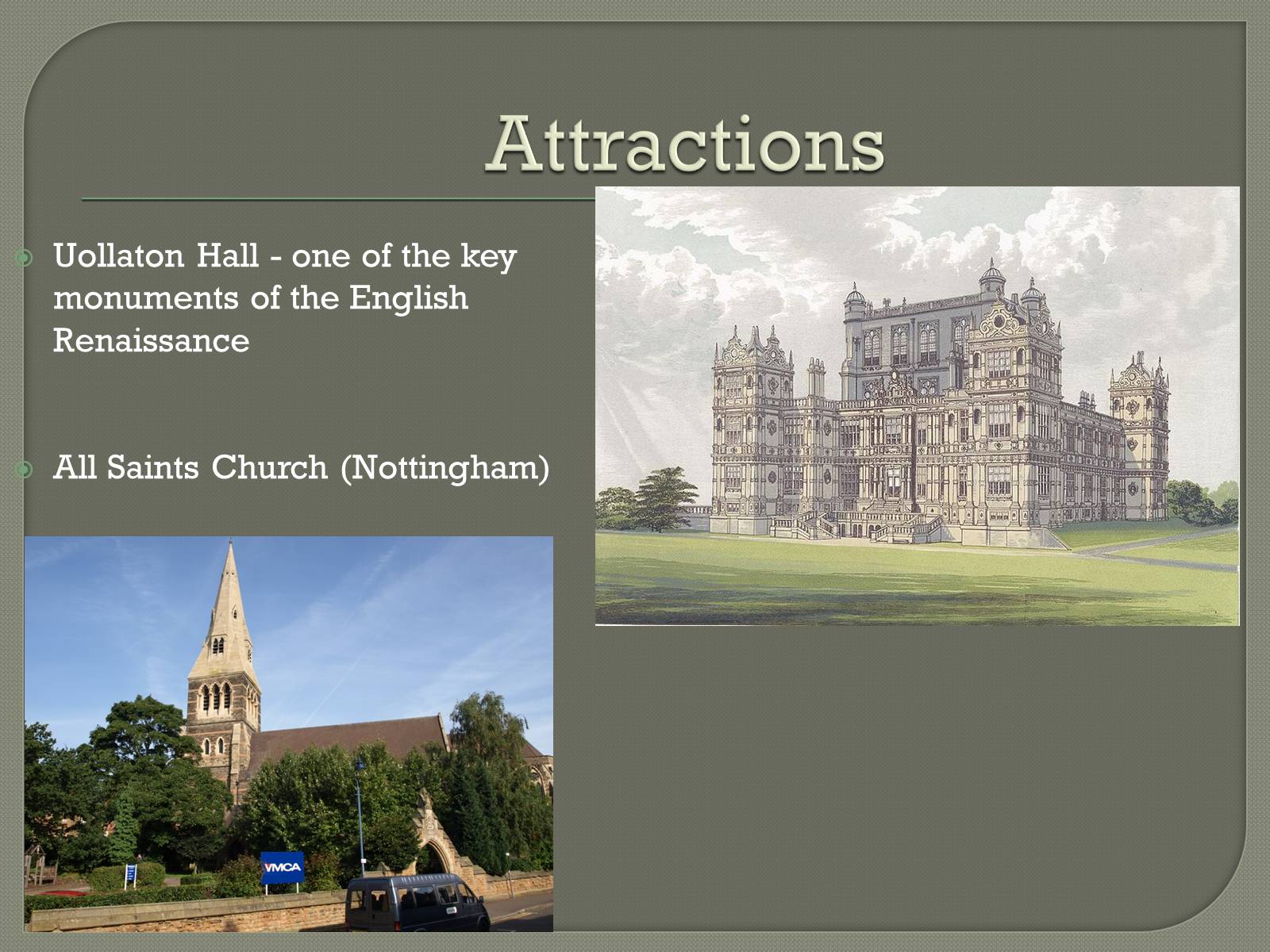 Bristol
Bristol - a city in England, unitary entity with the status of "city" and ceremonial county, a port in the South West of England in the UK, on the River Avon, near its confluence with the Bristol Bay Atlantic Ocean. 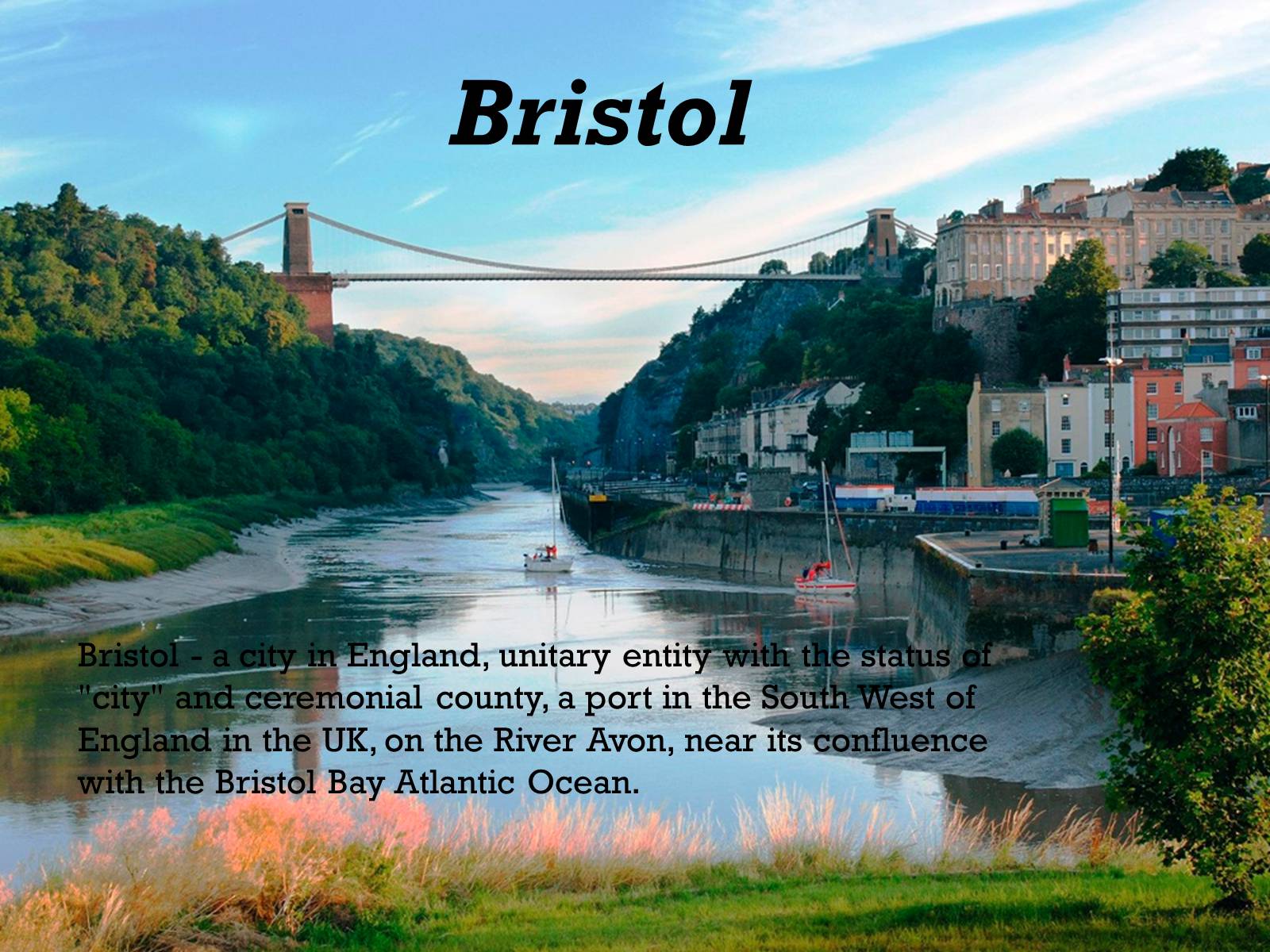 History of Bristol
On-site Bristol in Roman times there was a military camp Abona (Latin Abona), from which led to Batu paved road. After checking in Britain England town was renamed Brycgstow
Bristol continued to prosper and grow throughout the XVIII century, keeping the value of the leading port of the British Empire.
Several spurred the development of Bristol railway construction in 1841 and the famous suspension bridge over a deep gorge of Avon in 1864. 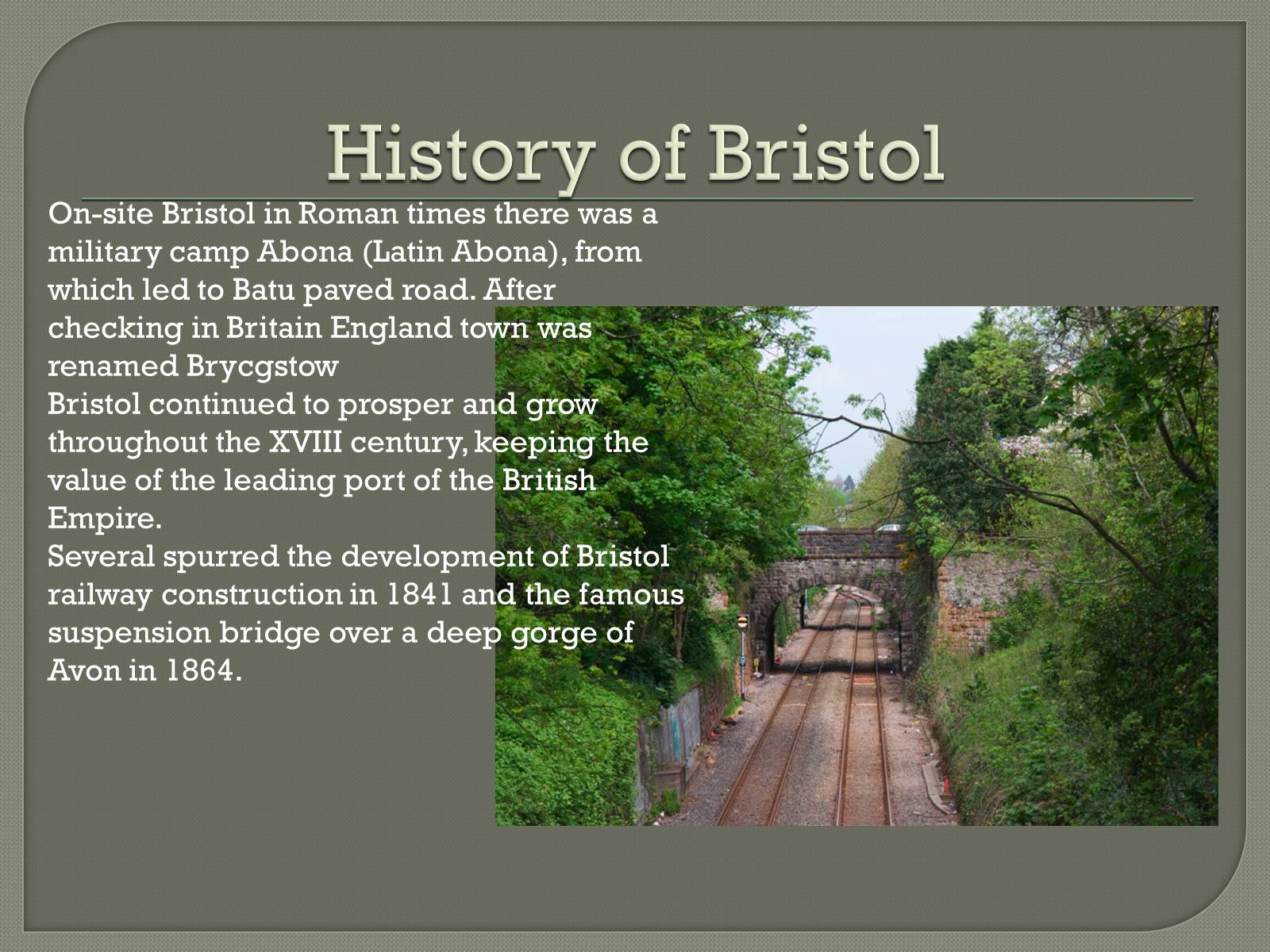 Culture in Bristol
Bristol - an important cultural center of the United Kingdom. Here are the famous theaters, museums, including the Bristol Industrial Museum and several art galleries. 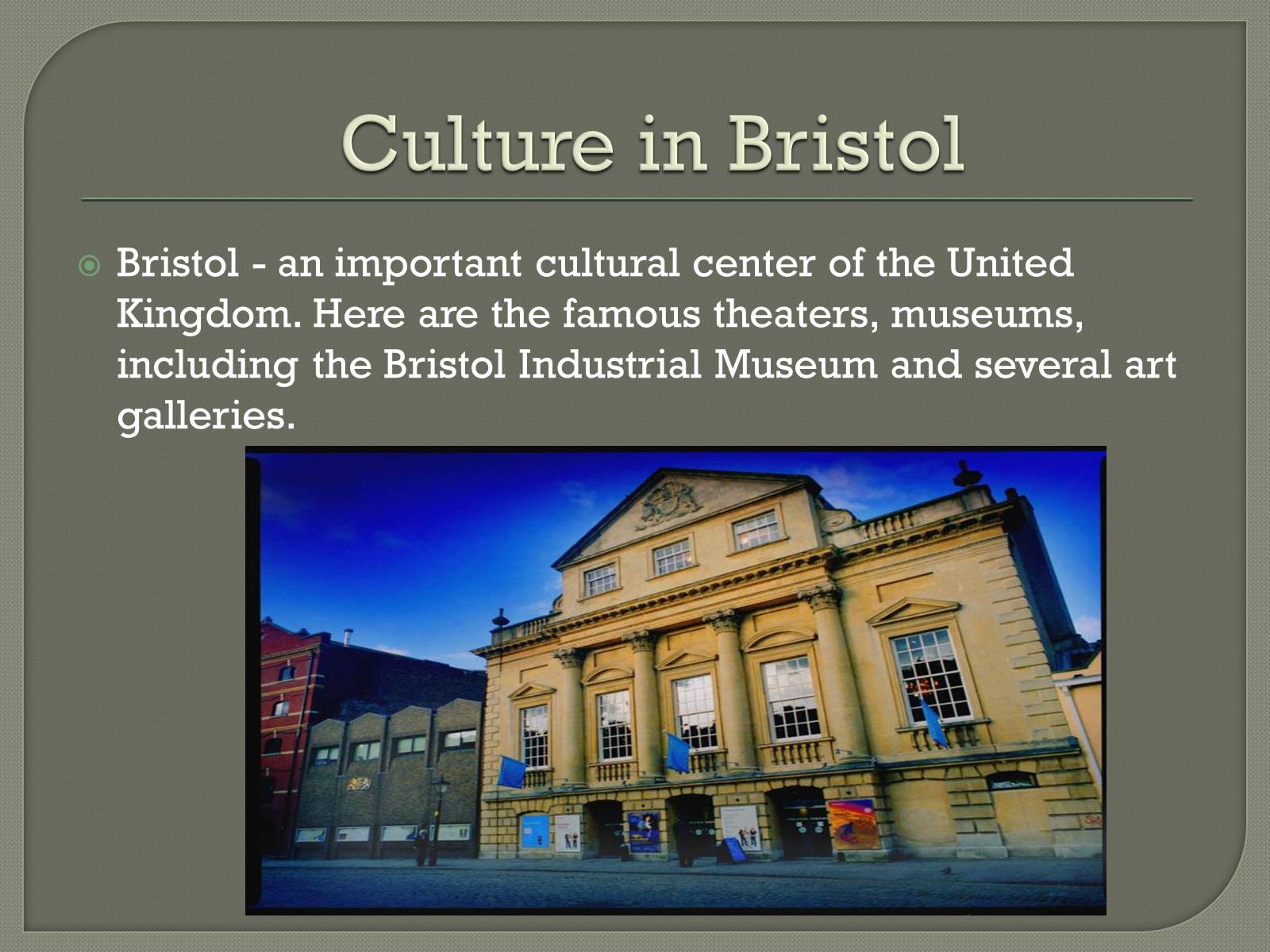 Attractions
The main attraction is Bristol Bristol Cathedral , in the past the abbey church of St.. Augustine , build the XII and XVI century in the Gothic style , and during the Reformation facing the Cathedral , the center of the Anglican Diocese of Bristol . The tallest building in the city for centuries remained the parish church of St Mary Redcliffe , built mostly in the XV century and recognized by Queen Elizabeth I the best parish church in her kingdom ; for her altar William Hogarth wrote his famous triptych . 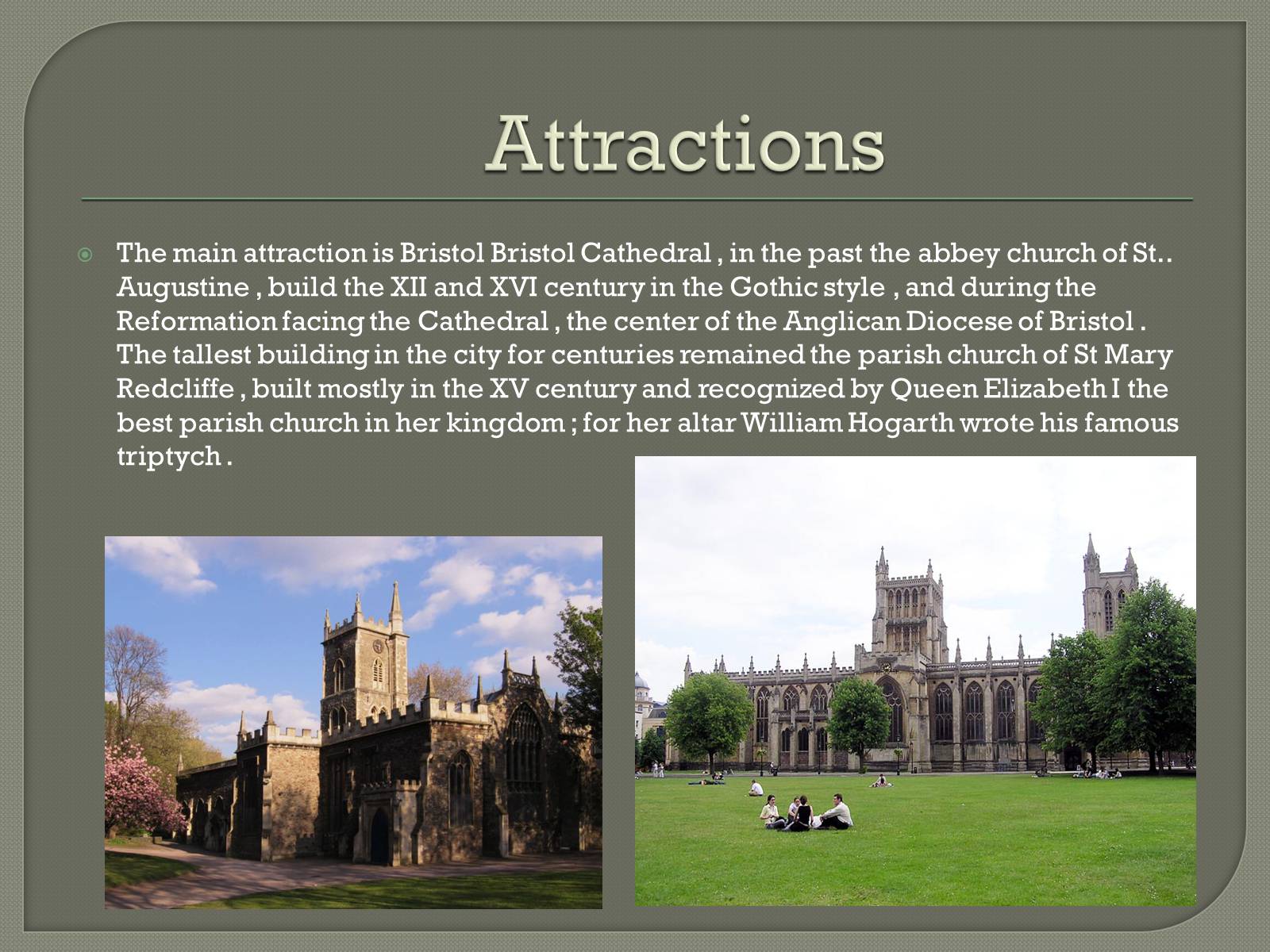 Attractions
Civil architecture of most of Bristol died during German air raids : One Night Only 2 November 1940 the city was dropped 15,000 bombs. Ancient Church of the Knights Templar was left in ruins as a reminder of the devastation . Surviving buildings are remarkable Theatre Royal and Cabot Tower , built in 1897 to commemorate the American expedition quatercentenary famous sailor. University of Bristol was founded in 1909 on the basis of the university college. Colston School operates from 1708 and Bristol Elementary School , Catholic school and school at the Queen Elizabeth Hospital are counting their stories with Tudor . 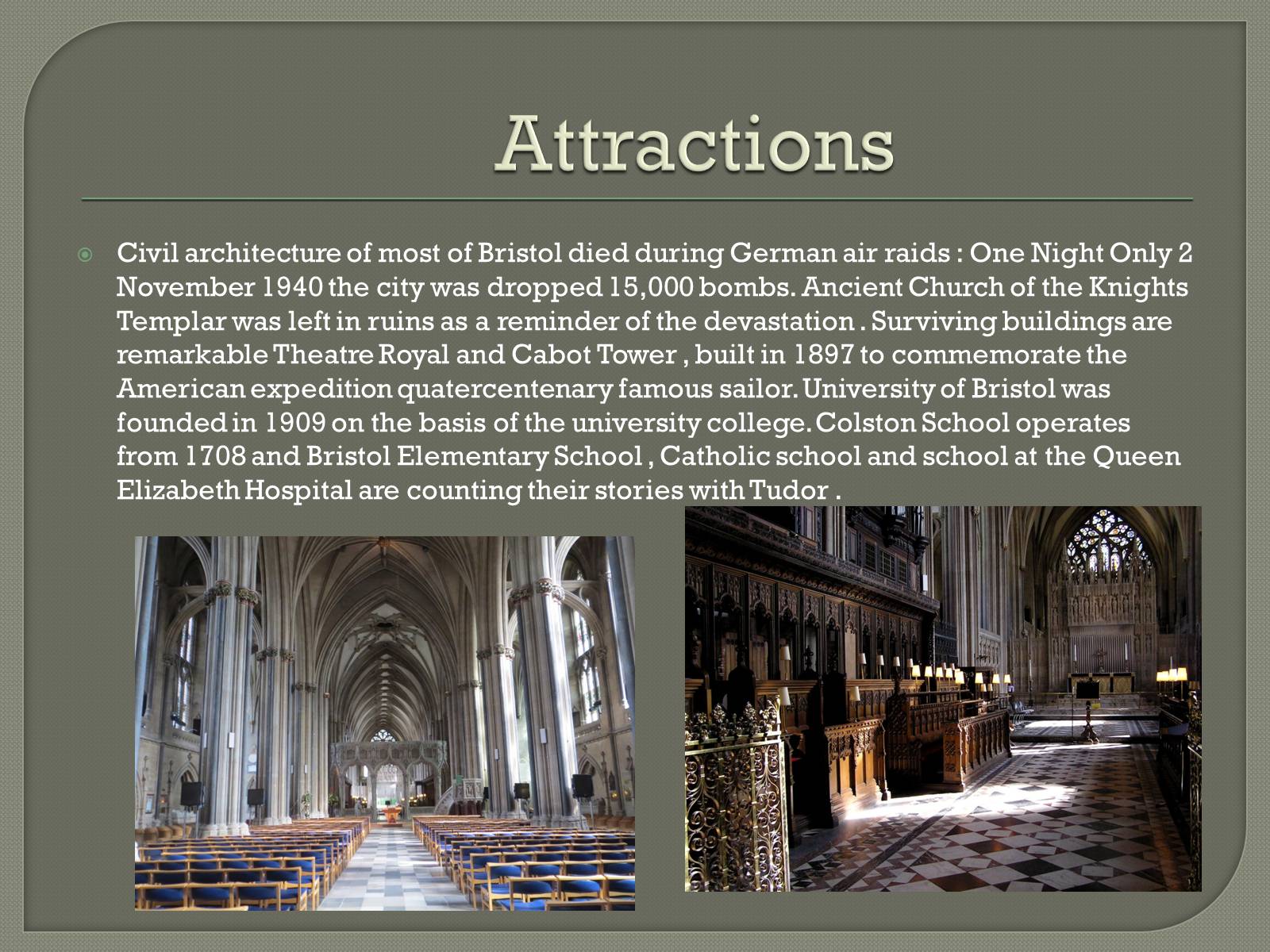 Thank you for
attention 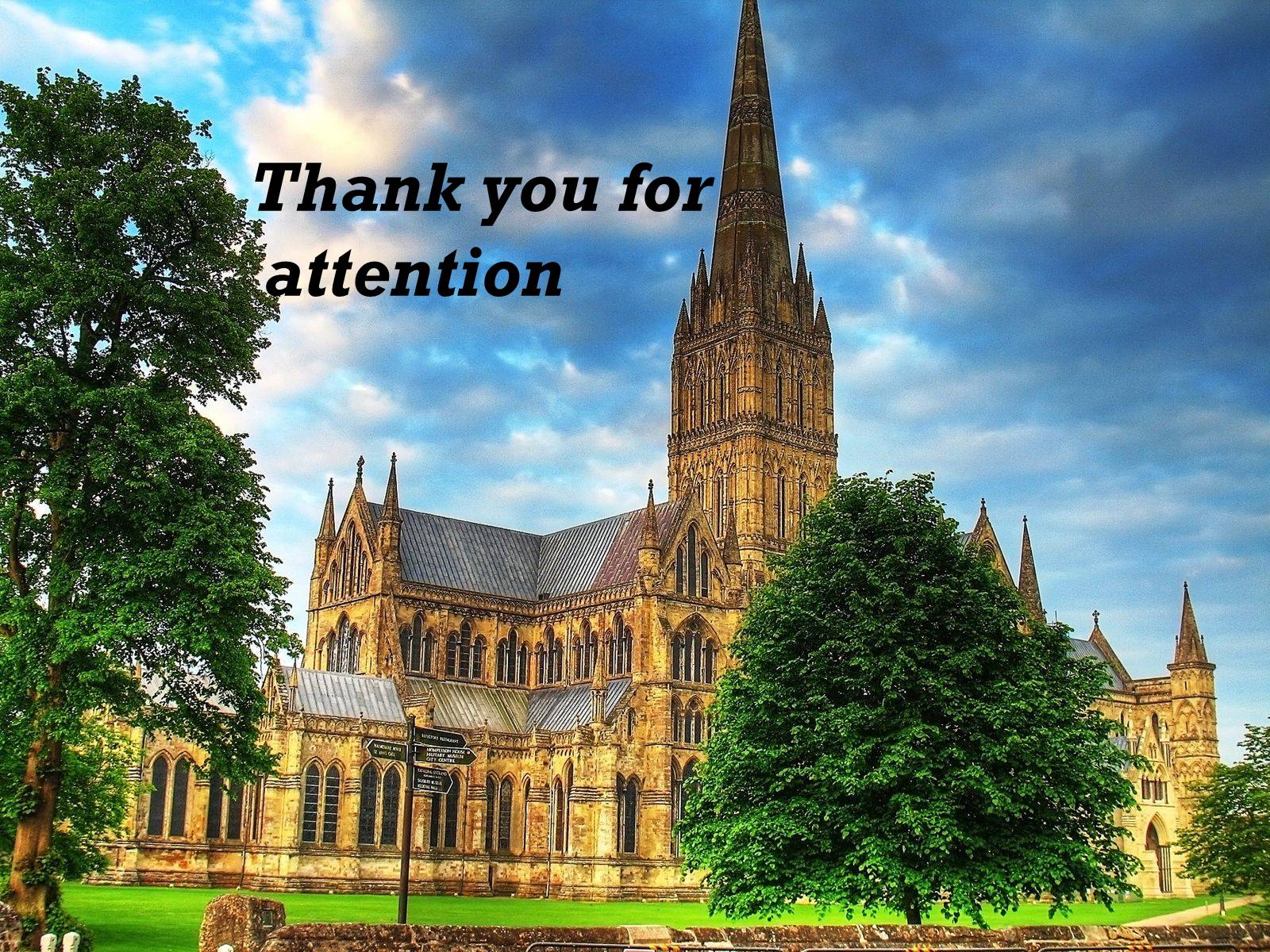