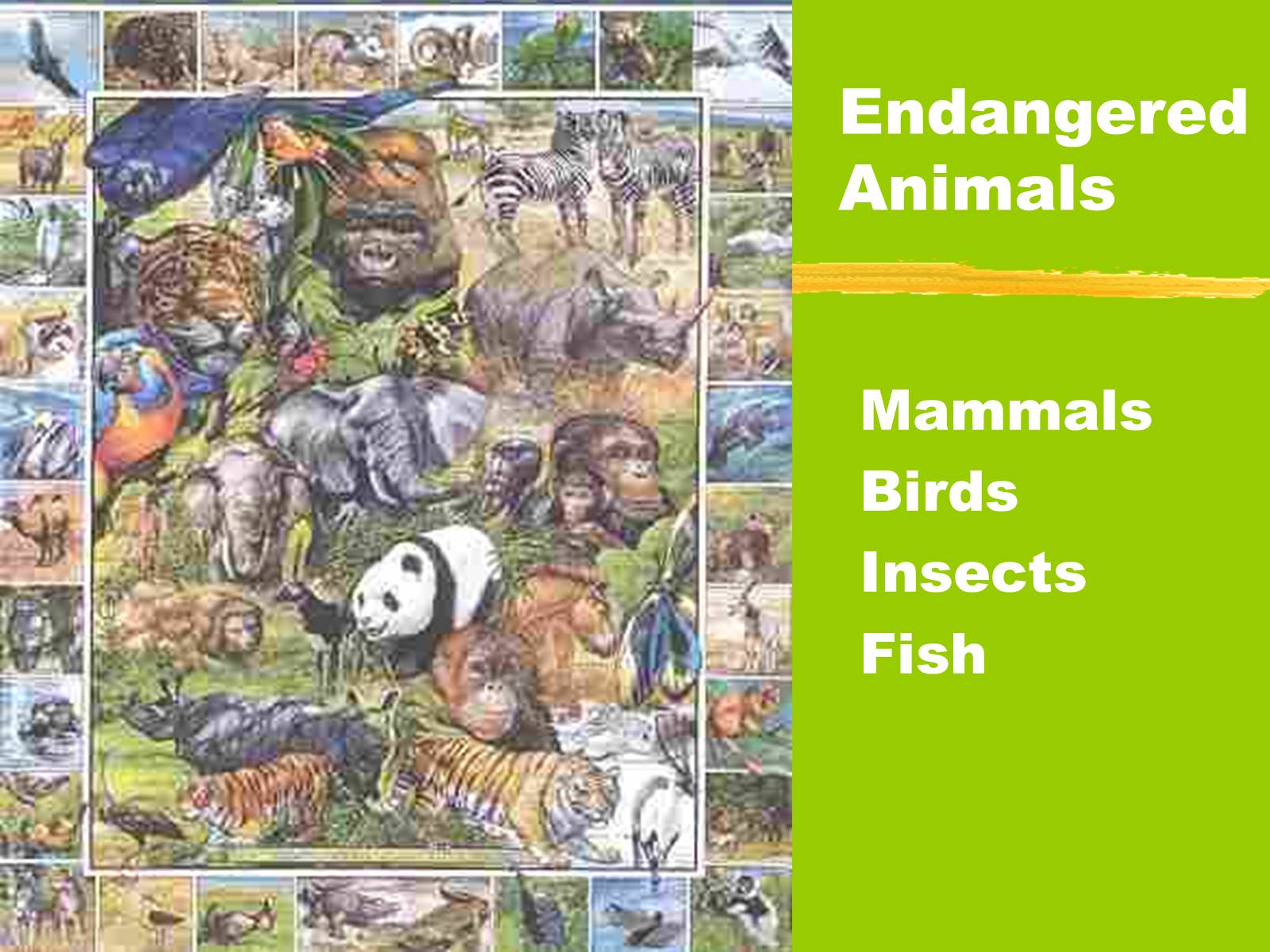 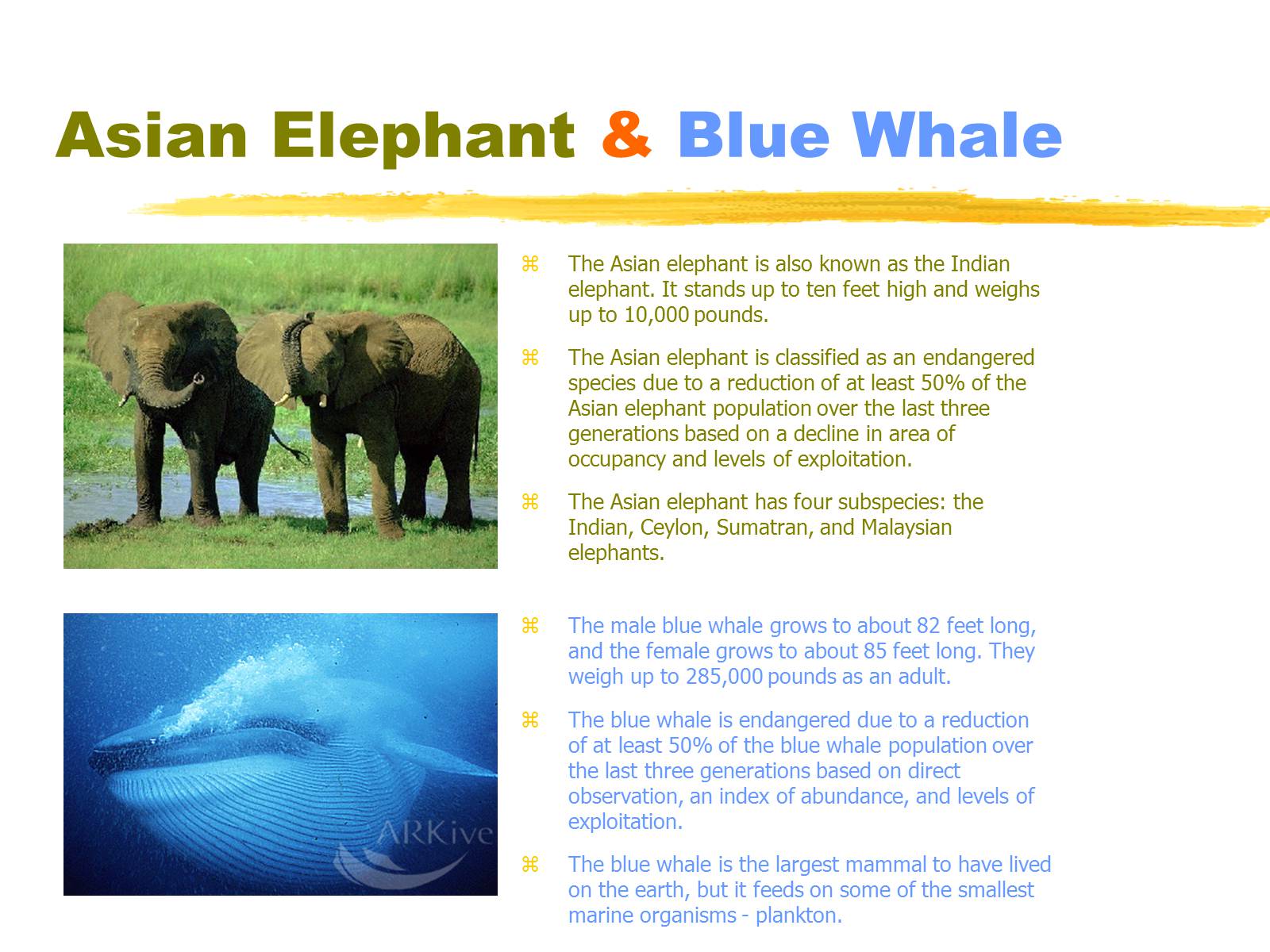 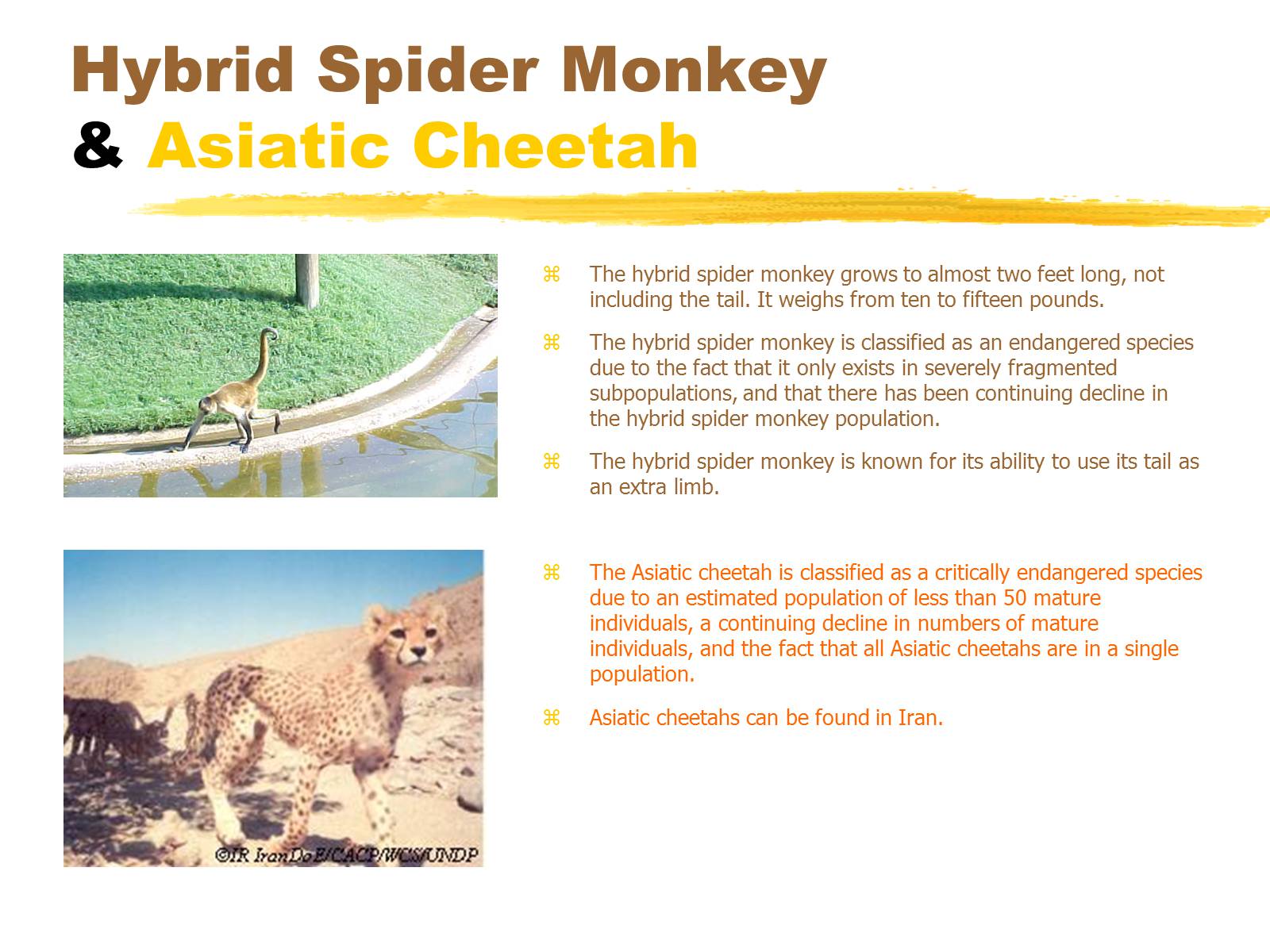 Tiger, Giant Panda & Black Rhinoceros
The male tiger grows up to ten feet long from its head to the tip of its tail, and weighs up to 575 pounds.
The tiger is classified as an endangered species due to the projected tiger population declining to at most 50% within three generations due to exploitation and a decline in area of occupancy.
The tiger consists of eight subspecies, distinguished by the colour of their coat.
The male giant panda stands up to five feet tall, and weighs up to 265 pounds. The female giant panda is smaller and weighs less.
The giant panda is classified as an endangered species due to the fact that it only exists in severely fragmented subpopulations consisting of up to 250 mature adults, and that there has been continuing decline in the area of habitat.
The giant panda feeds mainly on bamboo, even though it is classified as a carnivore.
The black rhinoceros grows up to twelve feet long and six feet high. It weighs up to three thousand pounds.
The black rhinoceros is classified as a critically endangered species due to a reduction of at least 80% of the black rhinoceros population over the last three generations based on direct observation, an index of abundance, and a decline in area of occupancy.
The black rhinoceros is the most aggressive species in the rhinoceros family, and can charge at speeds up to thirty miles per hour. 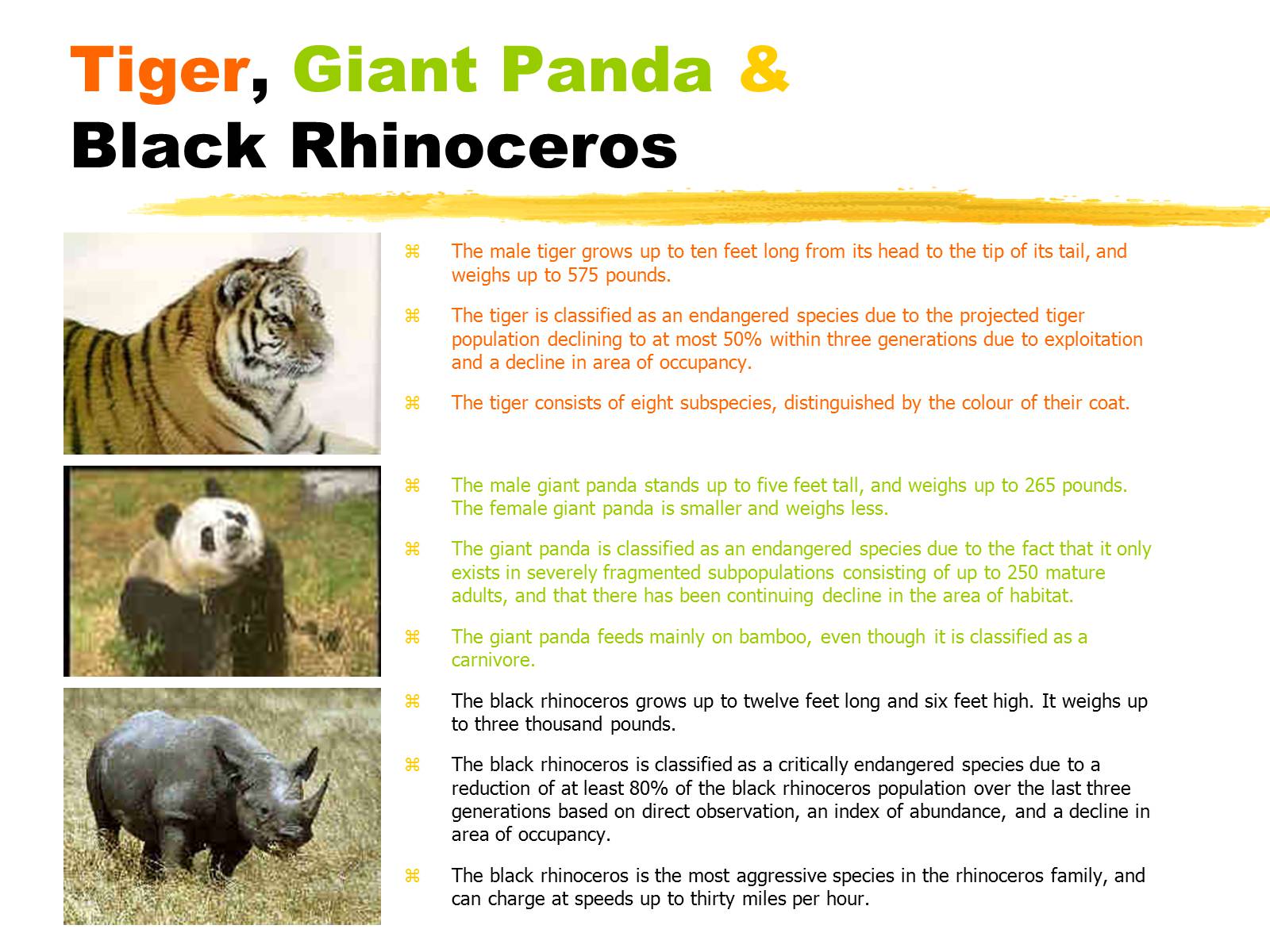 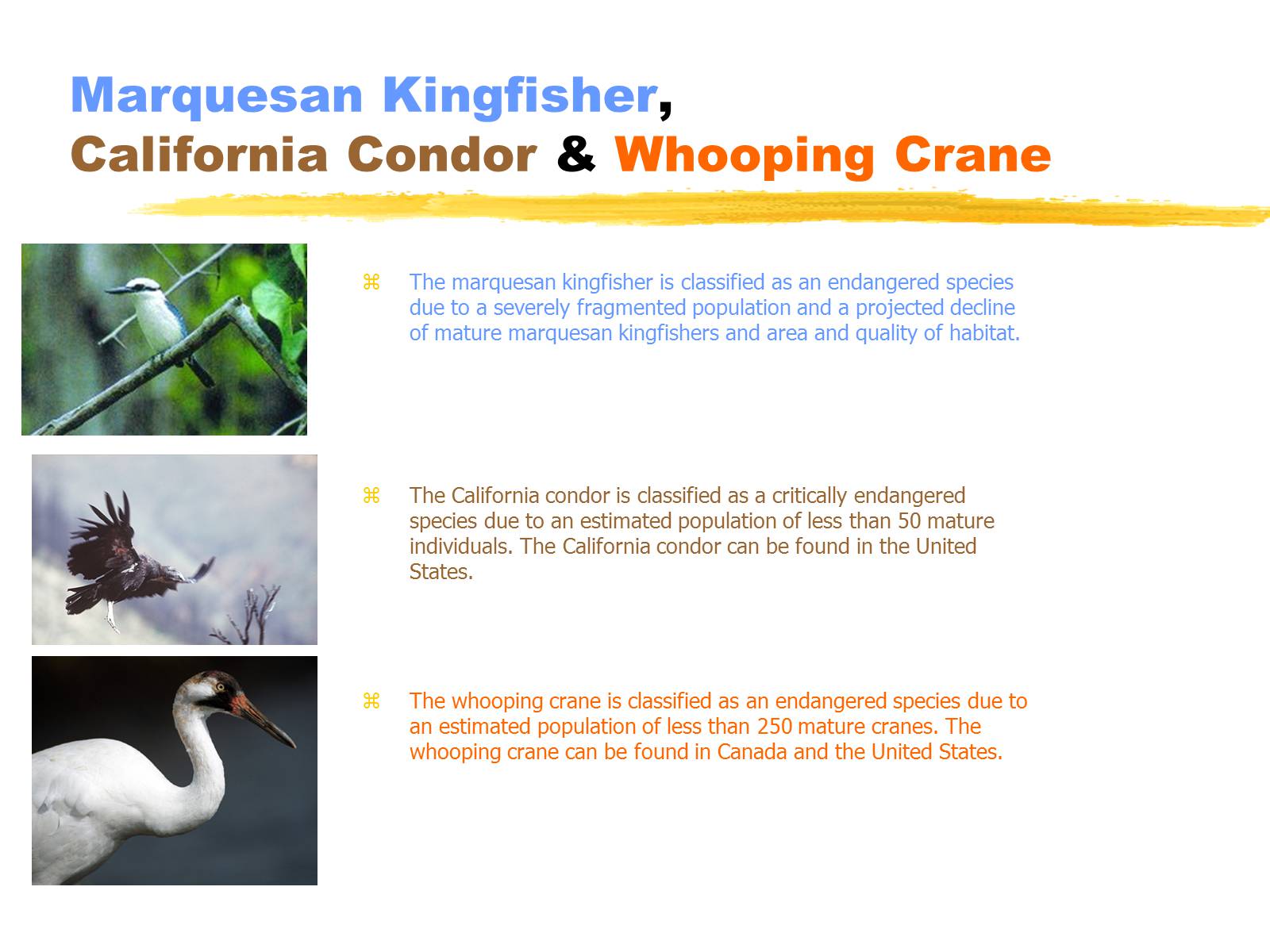 Hawksbill Sea Turtle, Cuban Boa & Chinese Alligator
It is very difficult to classify how endangered hawksbill turtles are because they are found throughout the world and are migratory. In some places, they may be very scarce, and in others they may thrive. Also, since there is little knowledge of their early population levels, it is very hard to know how much the populations have declined.
Currently (throughout the world), it is illegal to trade hawksbill turtle products. In order to succeed in keeping hawksbill turtles in existence, there must be cooperation among all nations that have hawksbill populations in their waters.
The Cuban boa is an endangered island-dwelling animal. It is found in holes and rock piles and on cultivated land. They are primarily arboreal (living among trees). They can reach a length of 4 m, being one of the larger species of boa of this genus. They may live up to 20 to 30 years.
Living on an island, the Cuban boa is at risk from disturbances (e.g. fire, hunting, cyclones), which can quickly push the species towards extinction. There is an international breeding programme for the species, which is coordinated by Prague Zoo.
The Chinese Alligator is believed that it will become extinct in about fifteen years. At the moment in a area called Anhui in China, are thirteen ponds with only about ten of these actually holding the alligators with any one pond having a max of eleven animals.
This is the animal that provided the much known chinese dragon myth. There is a breeding program setup by biologist and they are protected under the maximum law but they still need international help to secure the habitat and educate the public on these wonderful animals. 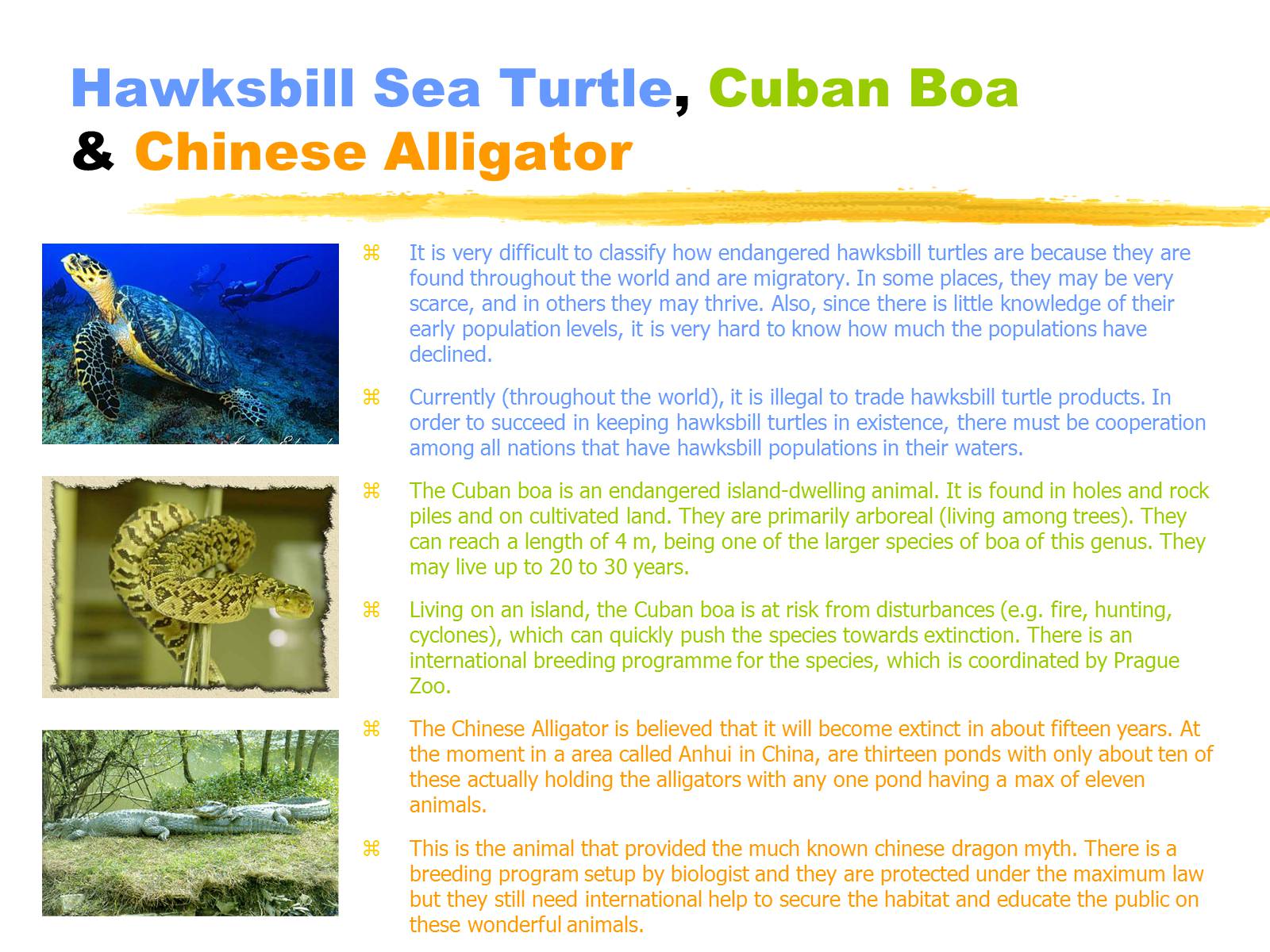 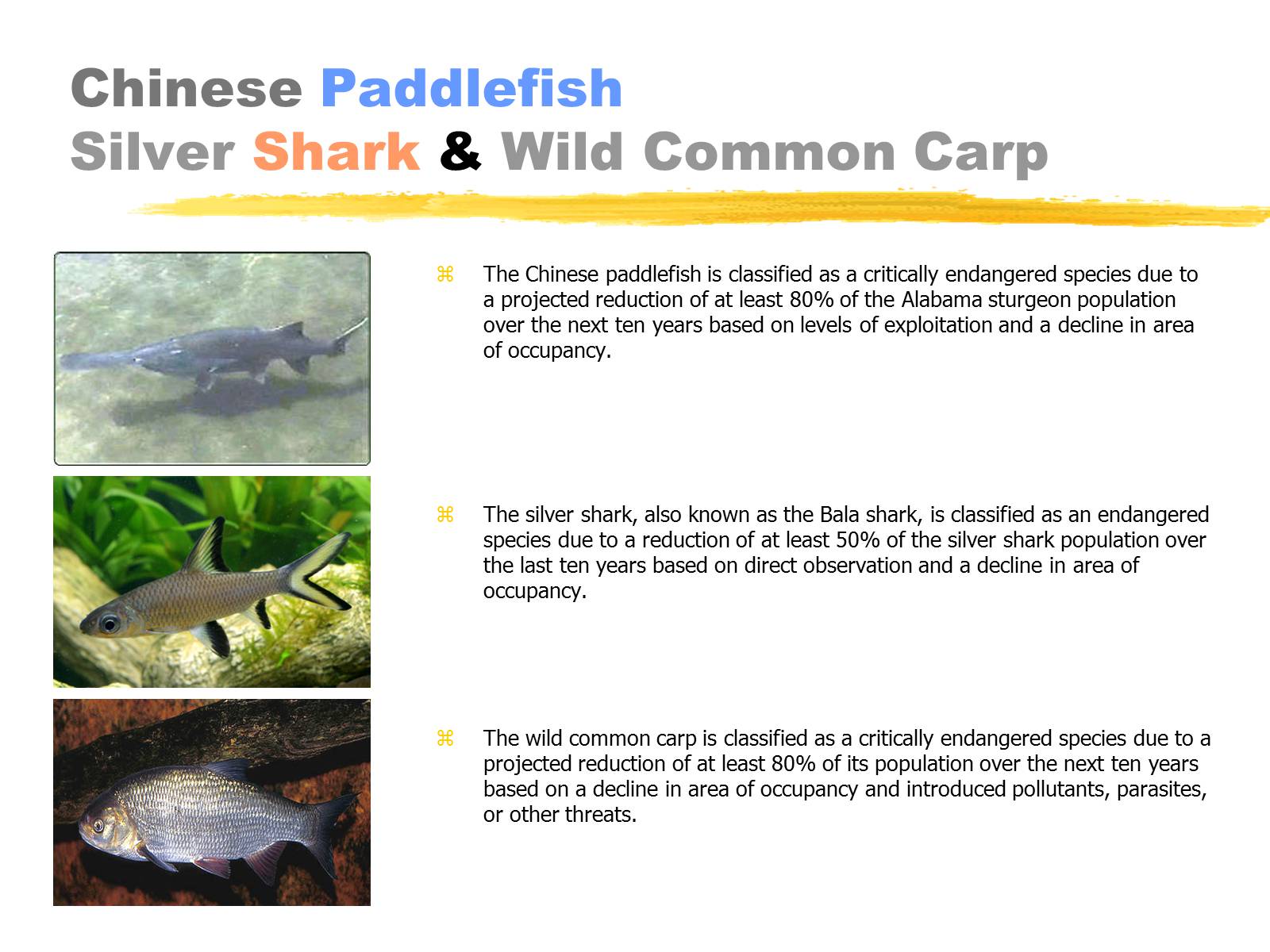 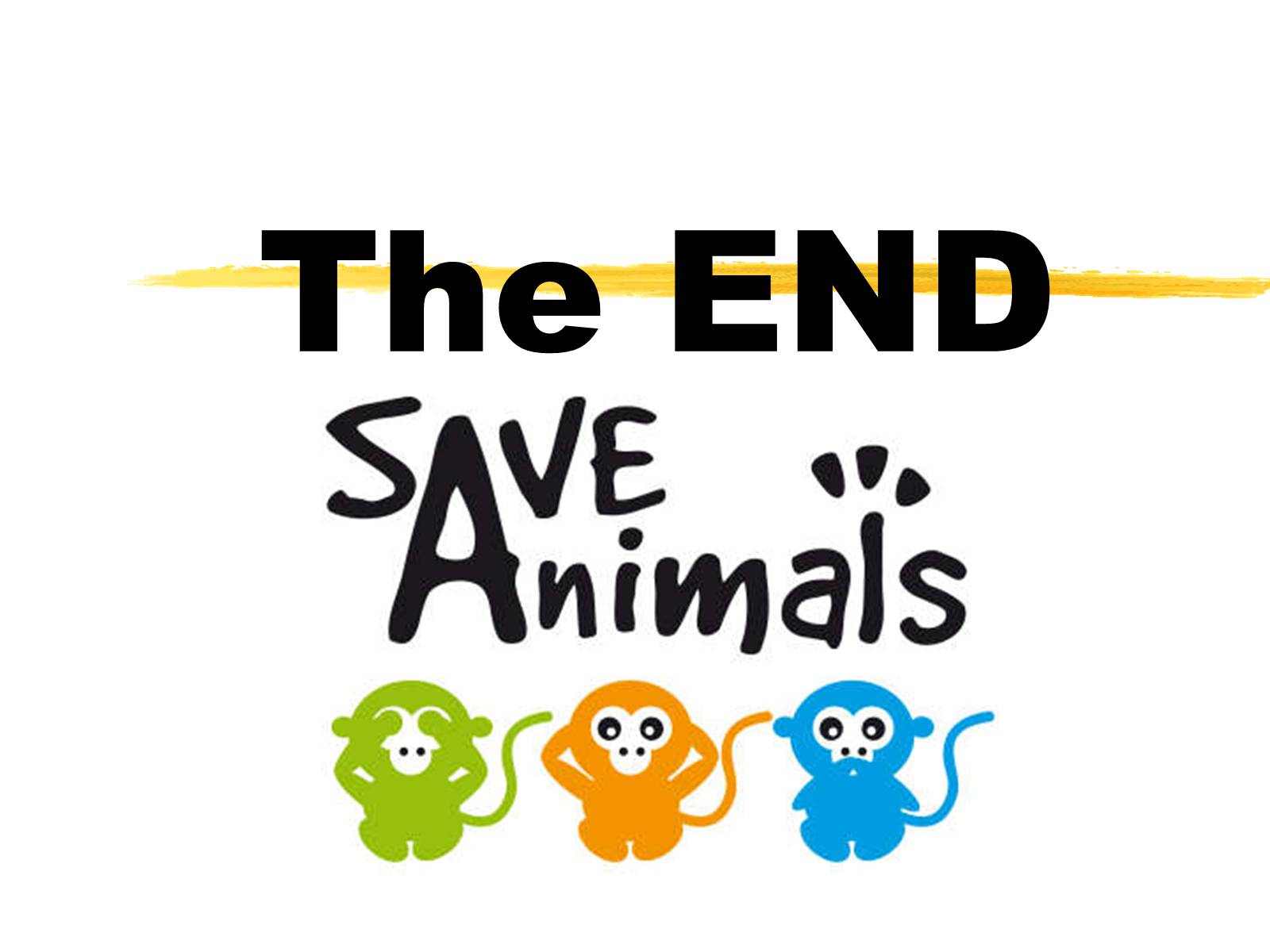