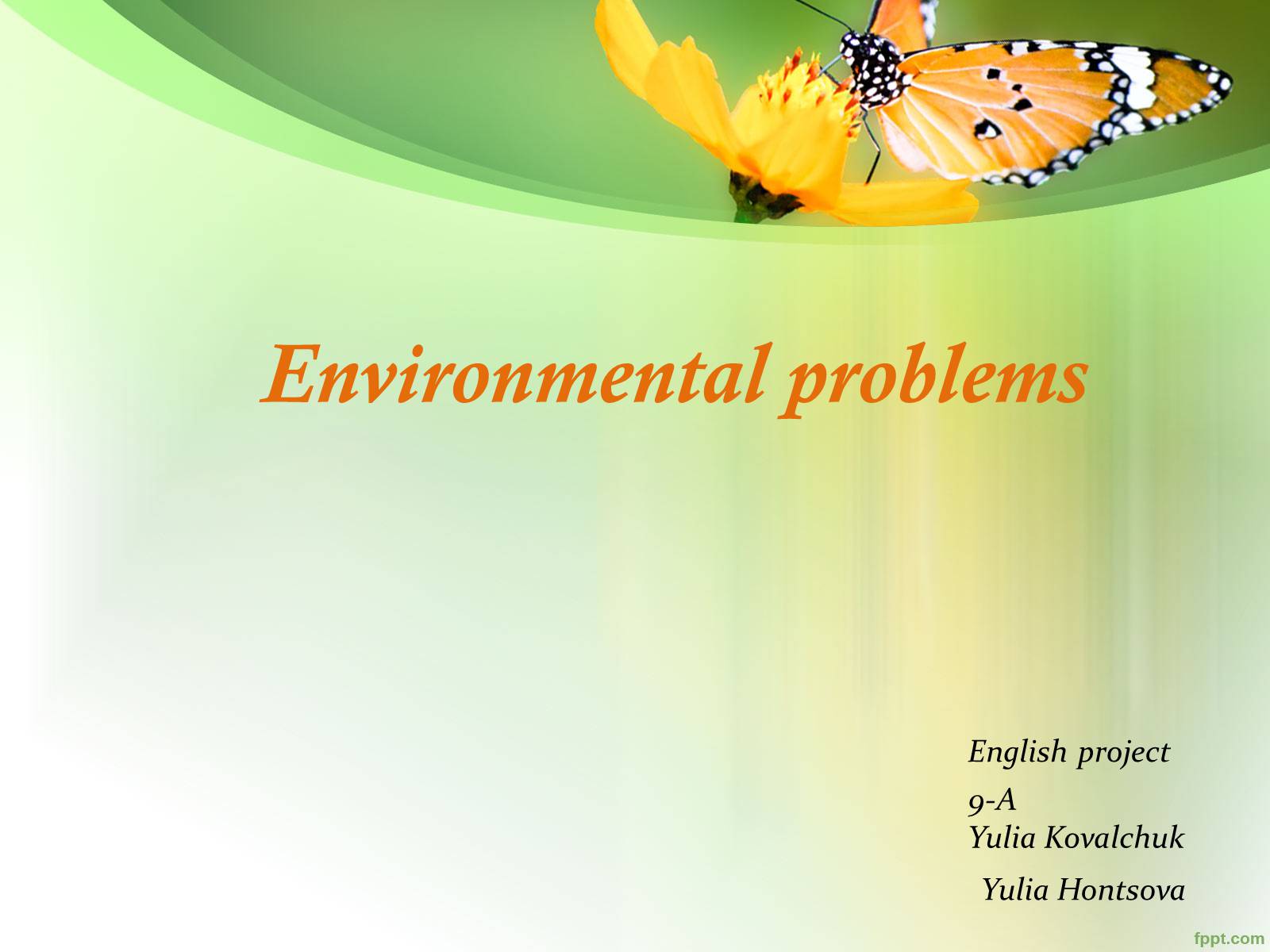 Since ancient times nature has served man, being the source of his life. For thousands of years people lived in harmony with environment and it seemed to them that natural riches were unlimited. But with the development of civilization man's interference in nature began to increase. Large cities with thousands of smoky industrial enterprises have appeared all over the world today. The byproduct of their activity pollutes the air we breathe, the water we drink, the land we grow grain and vegetables. 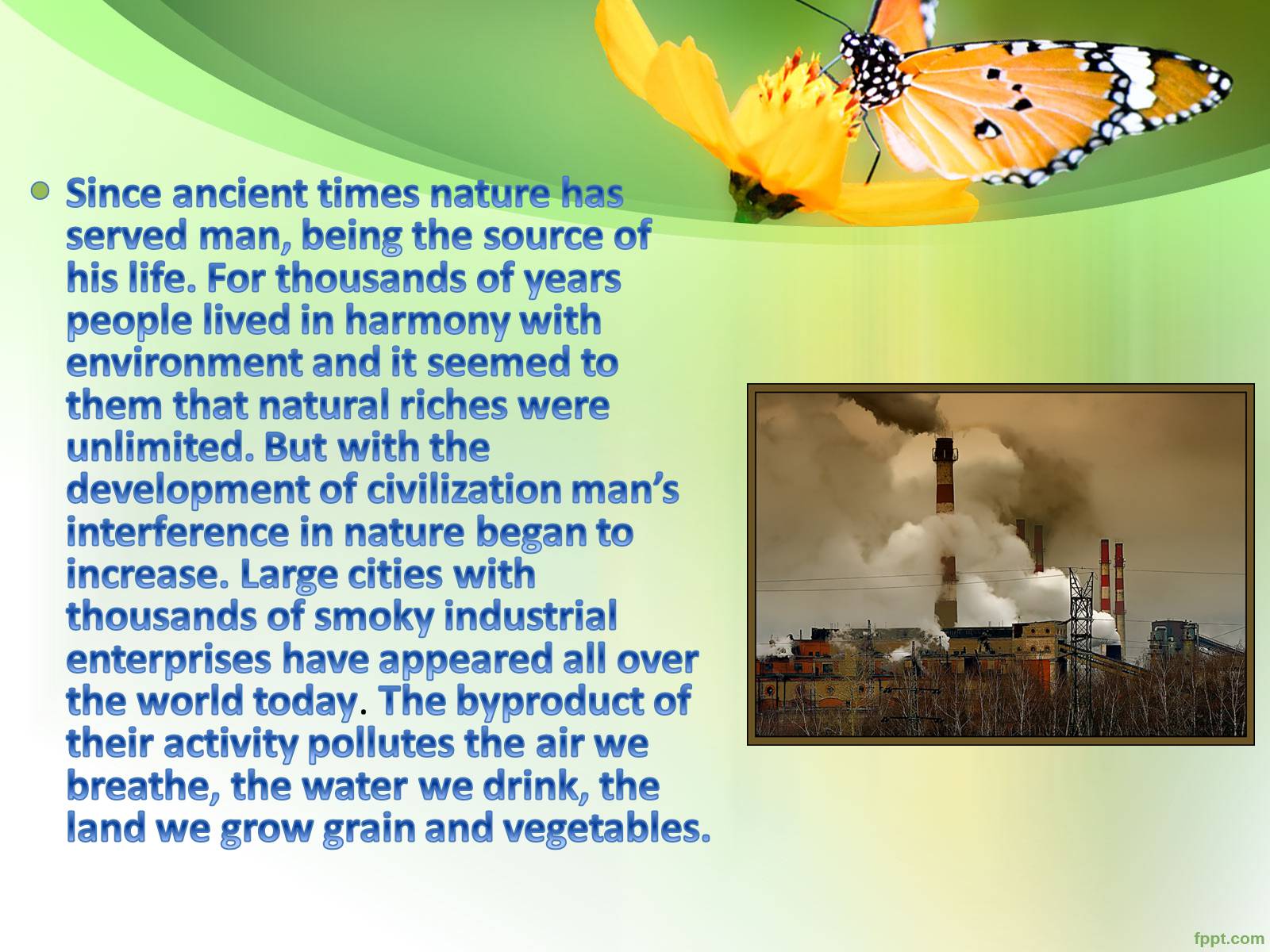 Every year world industry pollutes the atmosphere with about 1000 million tons of dust and harmful substances. Many cities suffer from smog. Vast forests are cut and burn in fire. Their disappearance upsets the oxygen balance. As a result some rare species of animals, birds, fish and plants disappear forever, a number of lakes and rivers dry up. The pollution of air and the world's ocean destruction of the ozone layer is the result of man's careless interaction with nature, a sign of ecological crises.
Siberian Tigers are on the
verge of extinction. 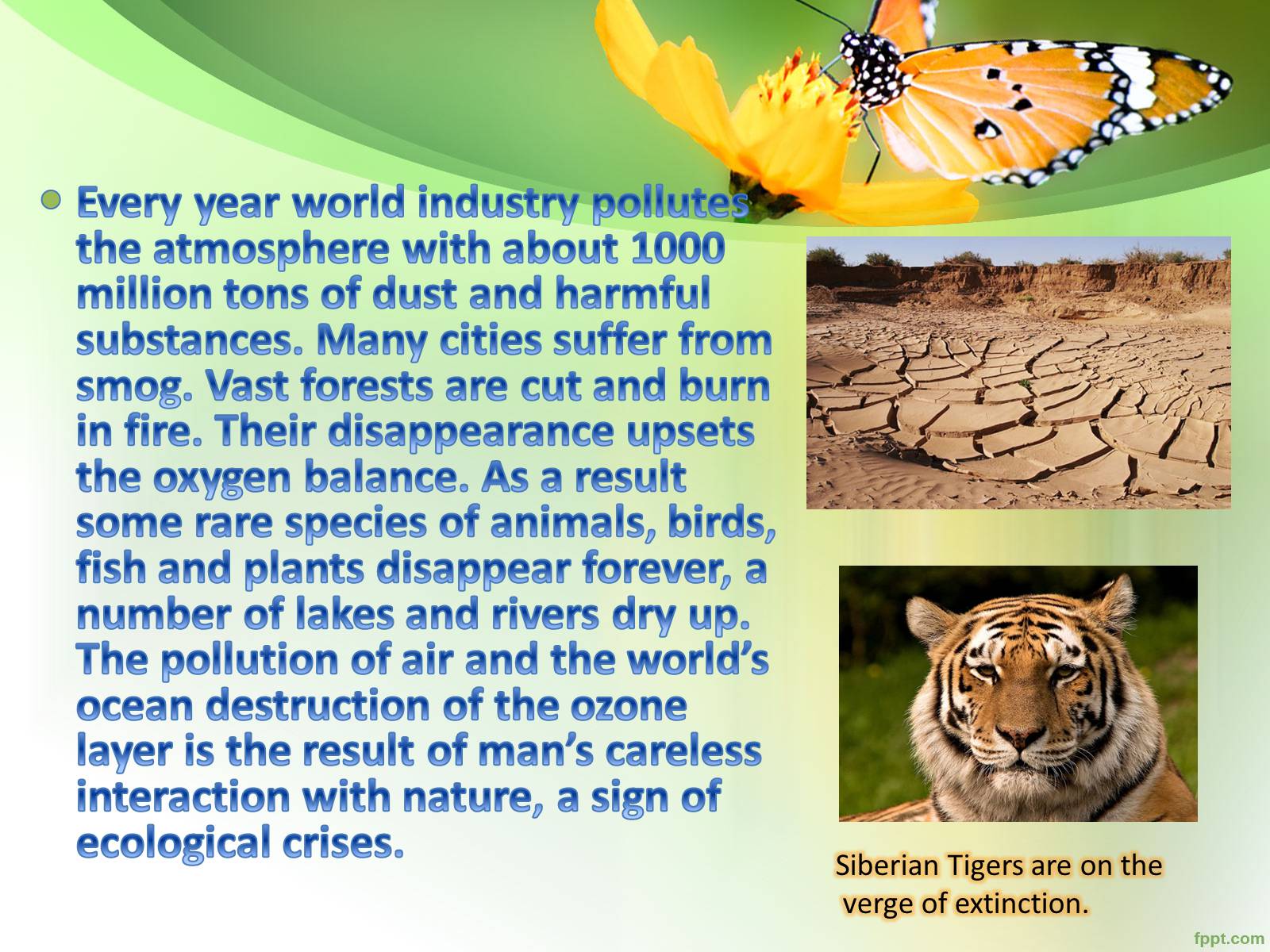 Chernobyl Tragedy
At night between 25 and 26 April 1986, a nuclear station near a small Ukrainian town of Chernobyl was affected by the largest-scale radiation-related manmade catastrophe in the history of humankind. The devastating tragedy left around five million suffering who lived in the area encompassing five thousand towns and villages of today's Belarus, Russia and Ukraine… Radioactive cesium and strontium with half-life of 28 and 30 years contaminated around 150,000 square kilometers across the territories of the three countries. A total of 17 European countries were affected by the radioactive fall-outs. 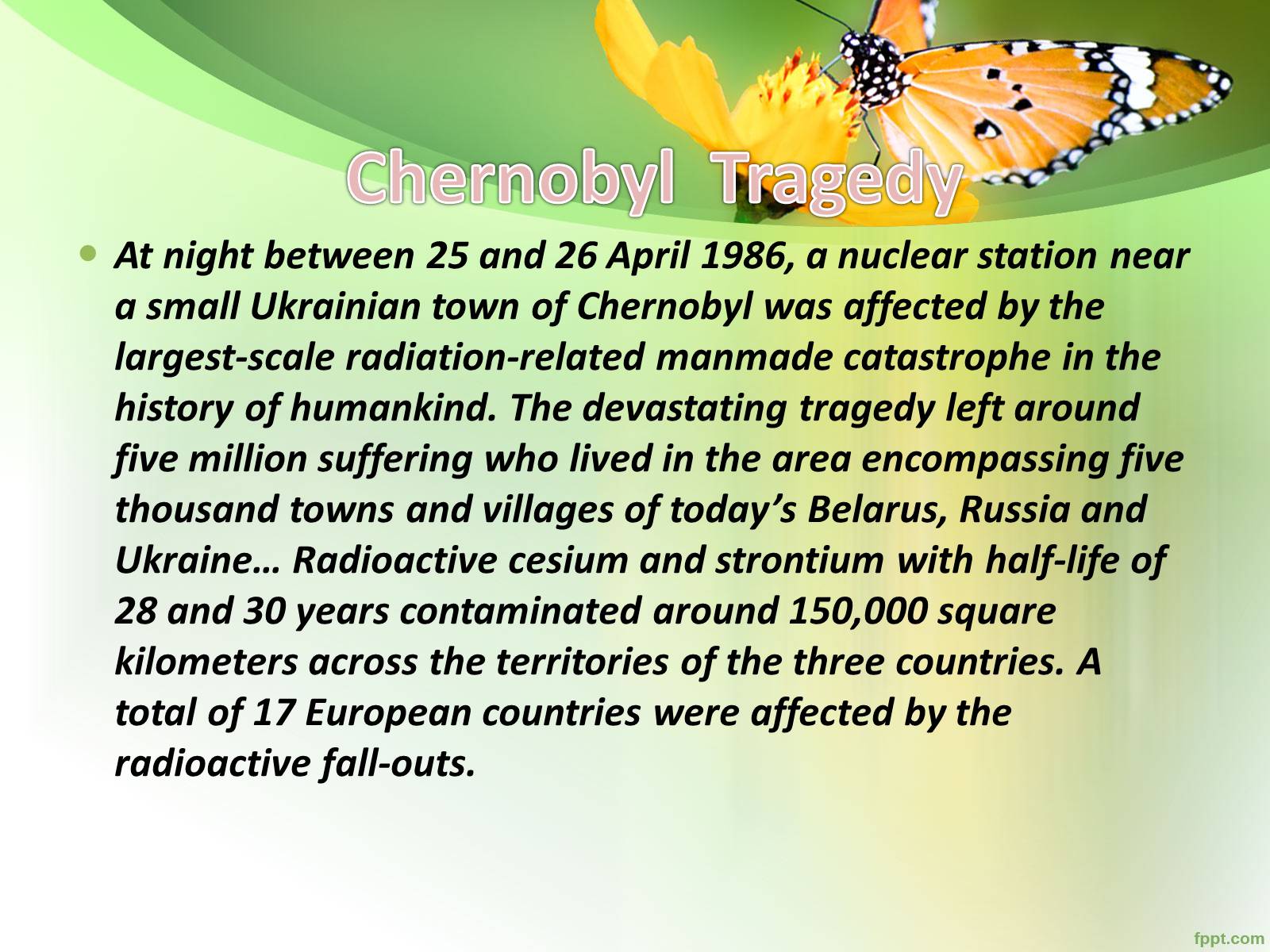 Currently, a new National Programme  is drafted for the mitigation of Chernobyl after-effects for the years 2011-2015. Its major goal will be to rehabilitate and develop the affected areas socially and economically, maintain the required level of safety for the suffering citizens and radiation safety. The principal task of the current programme is to move away from the rehabilitation efforts in most critical directions of the mitigation towards social and economic revival and sustainable development of the affected areas. 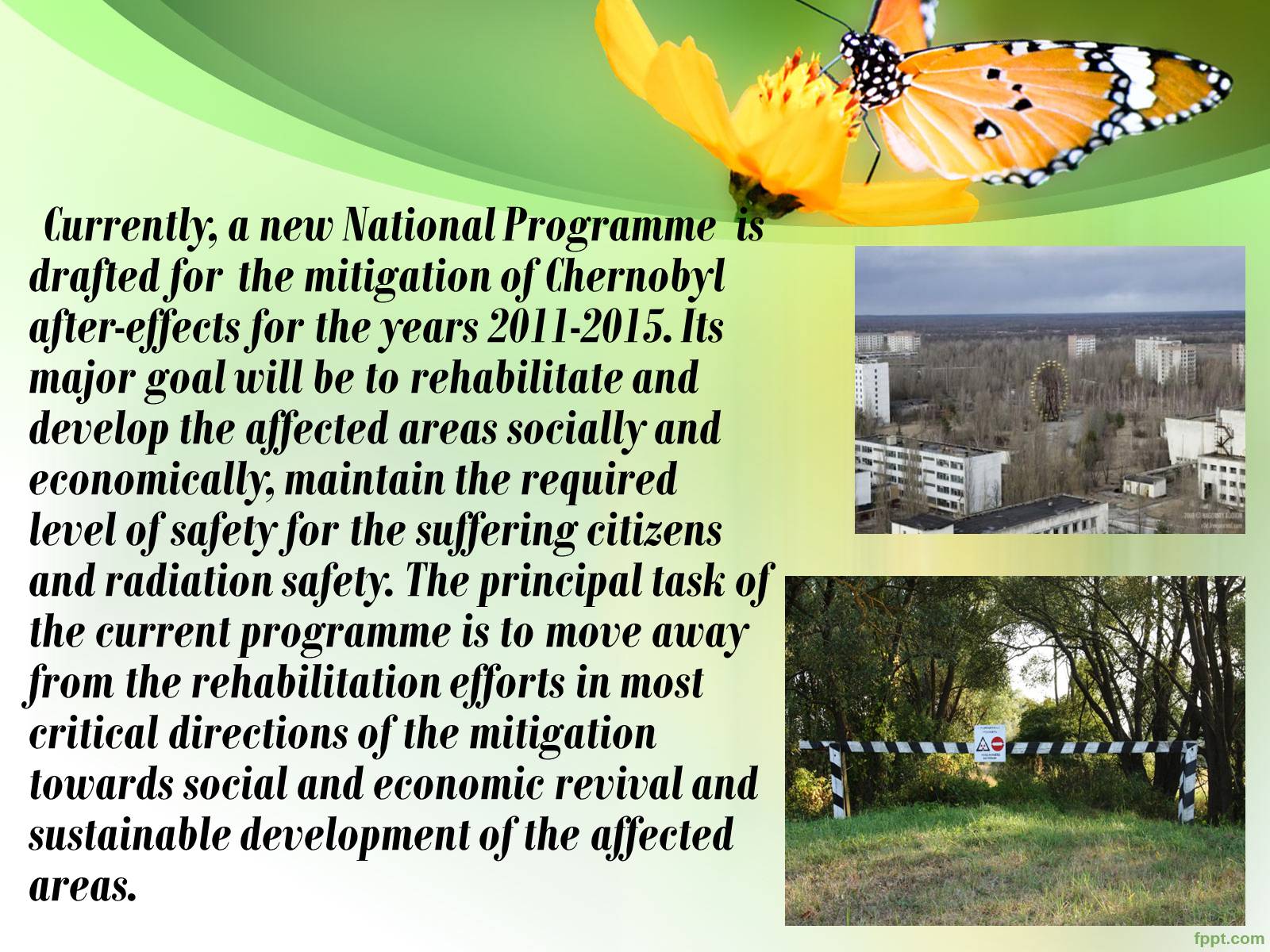 Not only Chernobyl but many of our «peaceful» factories and towns cause a great damage to the environment. Dangerous dust and blow-outs of the enterprises are being carried out by winds for long distances destroying the life around. People all over the world are worried about what is happening to the environment. They understand that the earth is their home, a big green home. The environment protection should be our universal concern. 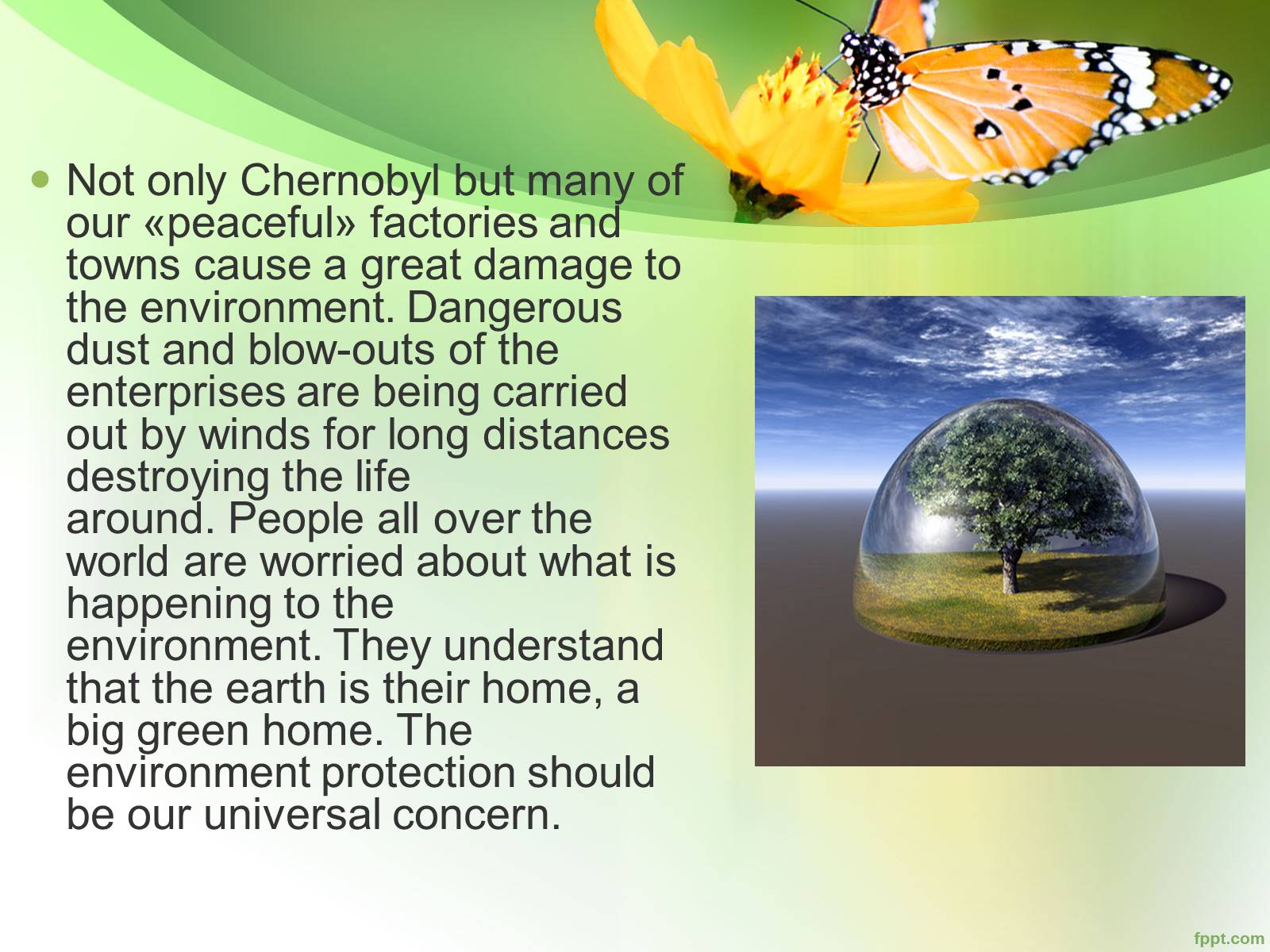 Global warming
Global warming process of the gradual increase fair-annual temperature of the atmosphere of the Land and World ocean.
The Scientist were defined: uncontrolled surges in atmosphere and other thoughtless behaviour of the person was a reason of the steady change the climate, capable completely to change the planet. The Danger of the global catastrophe has acknowledged the government and folk of the developed countries of the world. 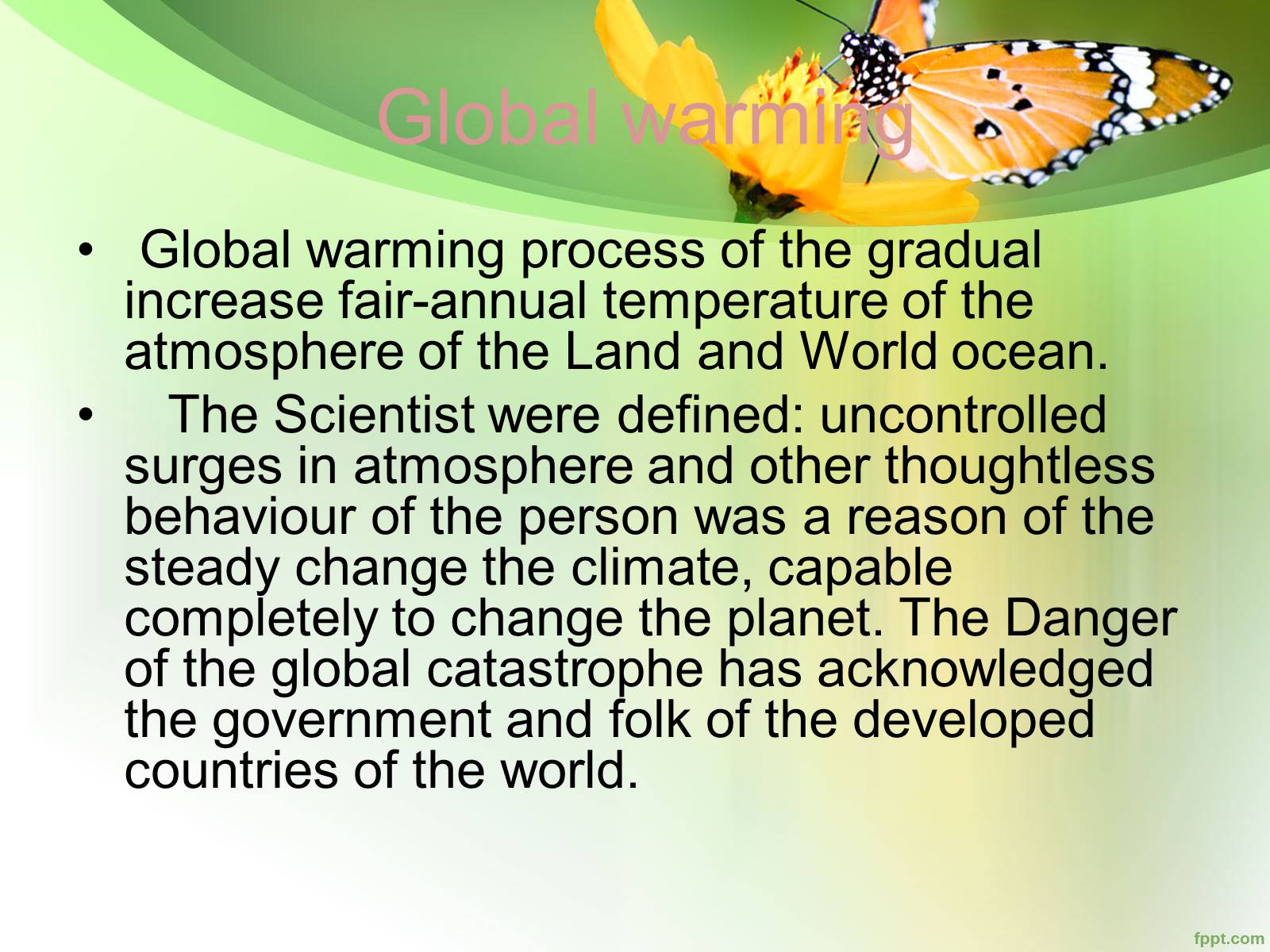 Antarctic Glaciers Melting Rapidly
A new study of glaciers in a portion of the Antarctic finds 84 percent of them have retreated over the past 50 years in response to a warmer climate.
The work was based on 2,000 aerial photos, some taken in the 1940s, and satellite images. The climate in the region has warmed by more than 4.5 degrees Fahrenheit (2.5 Celsius) in the last 50 years, the scientists said.
"The widespread retreat of the glaciers on the Antarctic Peninsula over the last 50 years was largely caused by climate change," said David Vaughan of the British Antarctic Survey in Cambridge.

Land degradation
Water and wind erosion are now the two primary causes of land degradation; combined, they are responsible for 84% of degraded acreage. Each year, about 75 billion tons of soil is eroded from the land—a rate that is about 13-40 times as fast as the natural rate of erosion.  Approximately 40% of the world's agricultural land is seriously degraded. According to the United Nations , an area of fertile soil the size of Ukraine is lost every year because of drought, deforestation and climate change.  In Africa, if current trends of soil degradation continue, the continent might be able to feed just 25% of its population by 2025, according to UNU's Ghana-based Institute for Natural Resources in Africa. 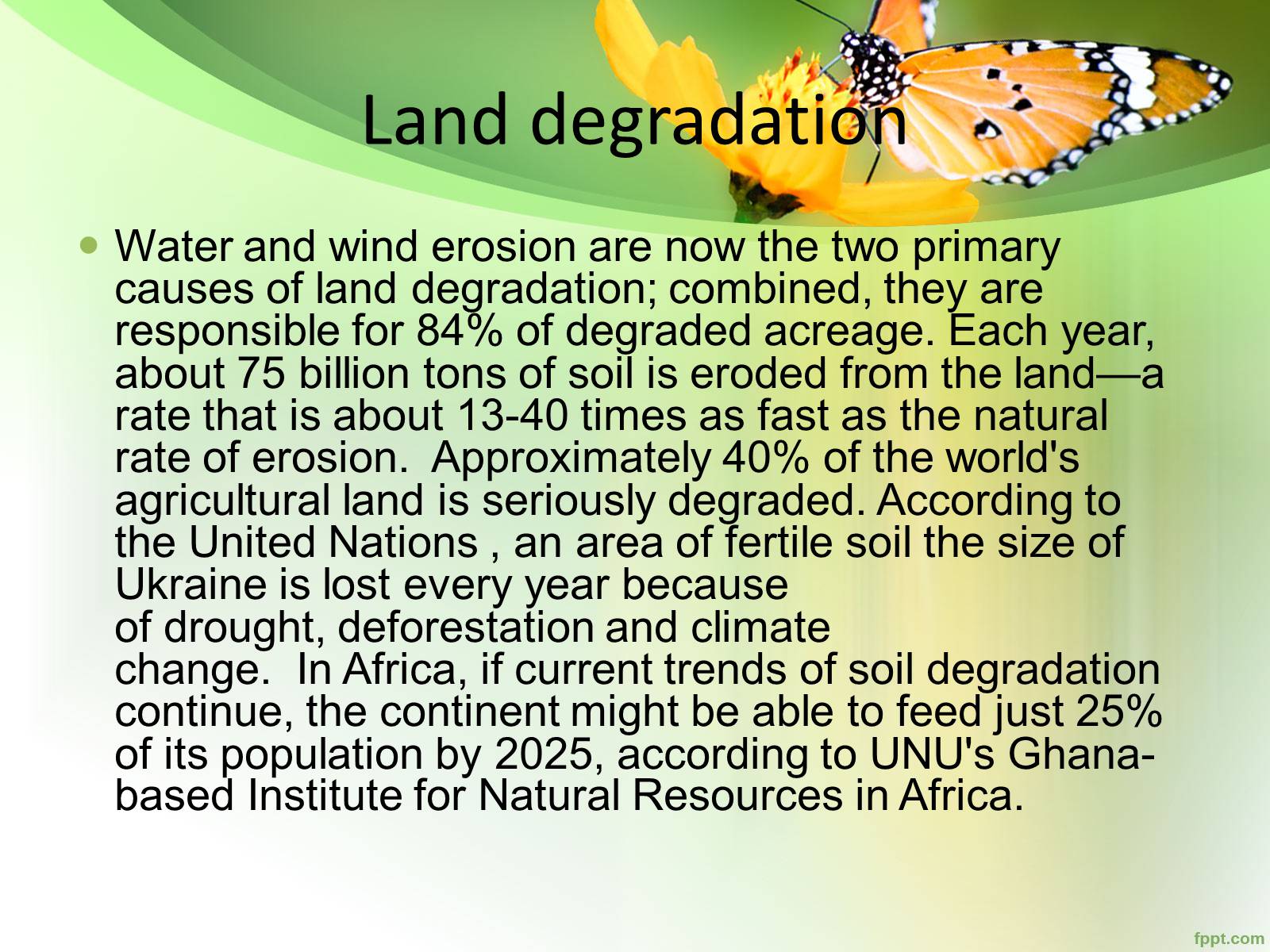 During the 17th and 18th centuries, Easter Island experienced severe erosion due to deforestation and unsustainable agricultural practices. The resulting loss of topsoil ultimately led to ecological collapse, causing mass starvation and the complete disintegration of the Easter Island civilization. 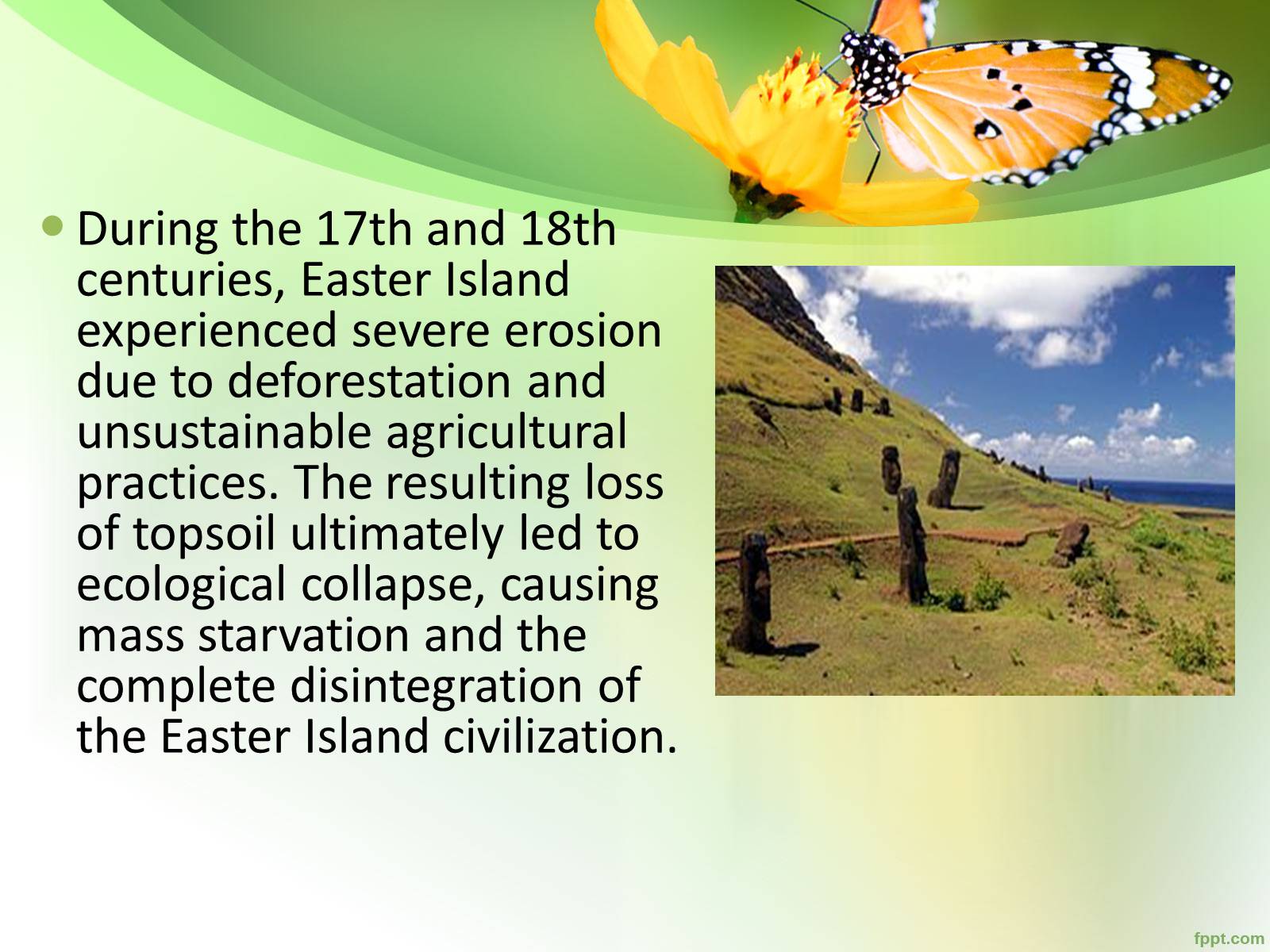 Prevention and remediation
The most effective known method for erosion prevention is to increase vegetative cover on the land, which helps prevent both wind and water erosion. Terracing is an extremely effective means of erosion control, which has been practiced for thousands of years by people all over the world.
Terracing is an ancient technique that can significantly slow the rate of water erosion on cultivated slopes. 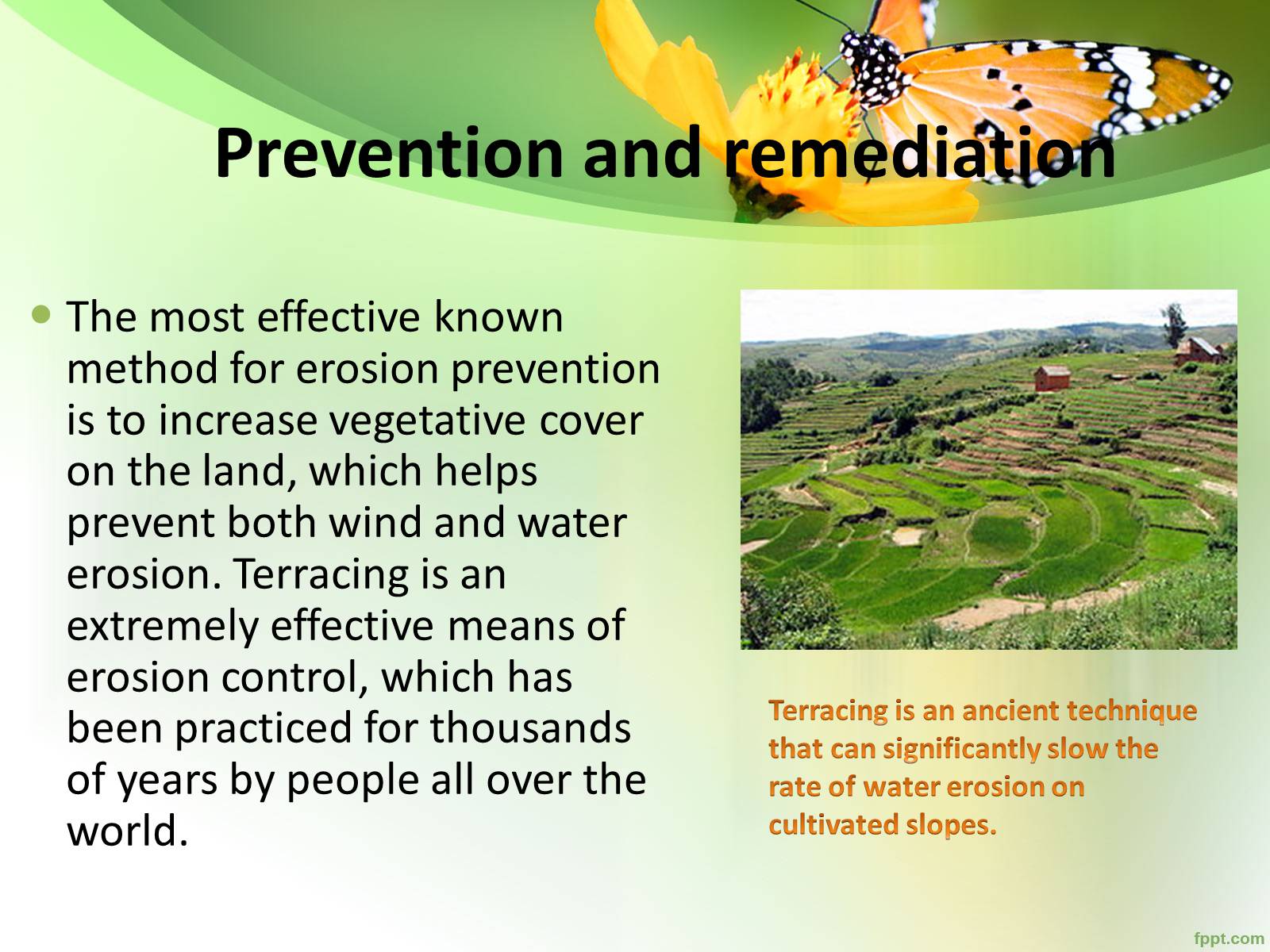 Results
As many as 159 countries — members of the UNO have set up environmental protection agencies. Numerous conferences have been held to discuss questions of ecologically poor regions including the Aral Sea, the South Urals, Kuzbass, Donbass, Semipalatsinsk and Chernobyl. An international environmental research center as been set up on Lake Baikal. The international organization Greenpeace is also doing much to preserve the environment. But these are only the initial steps that must be carried forward to protect not only for the sake of the present but for the future generations. 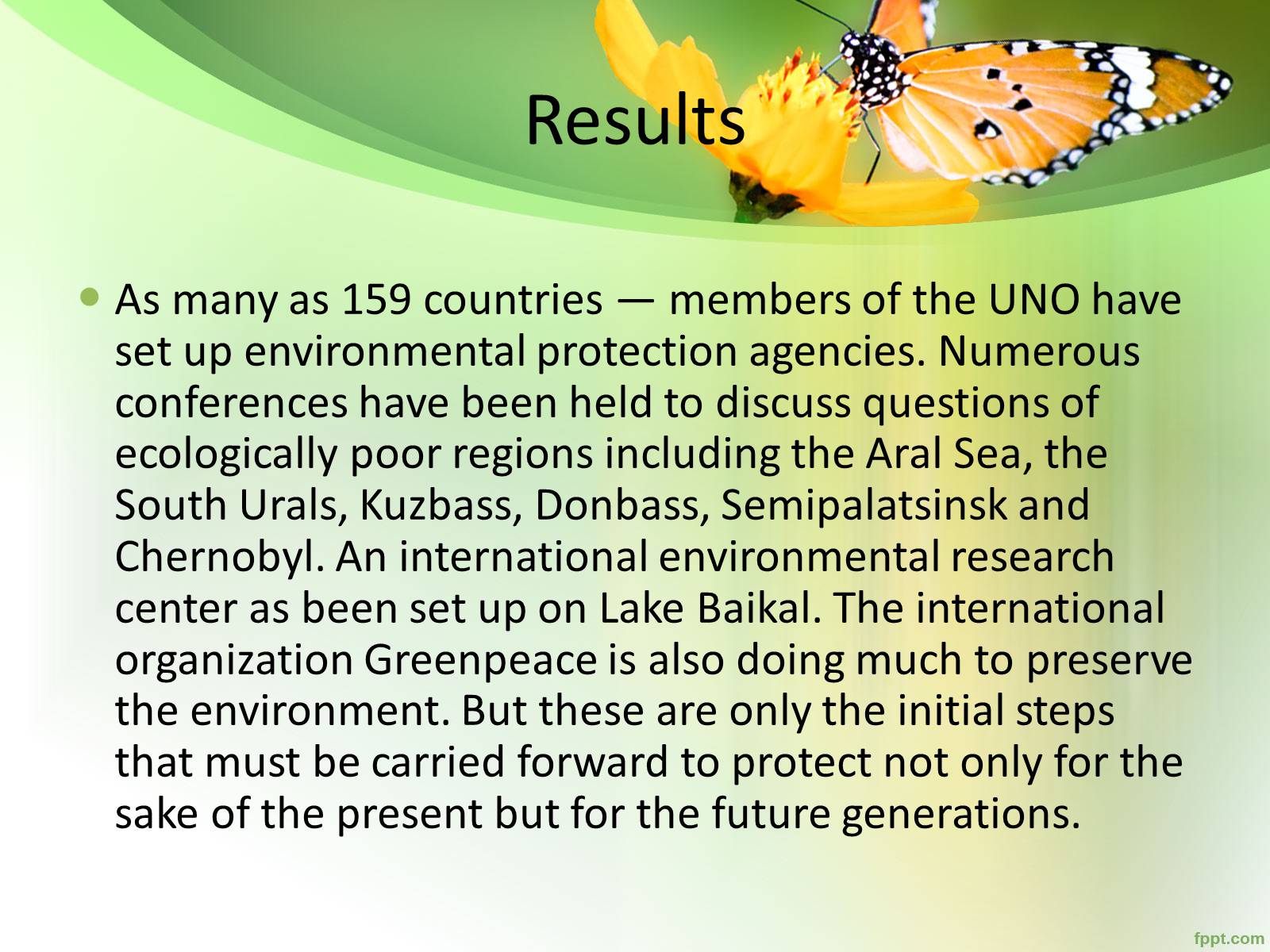