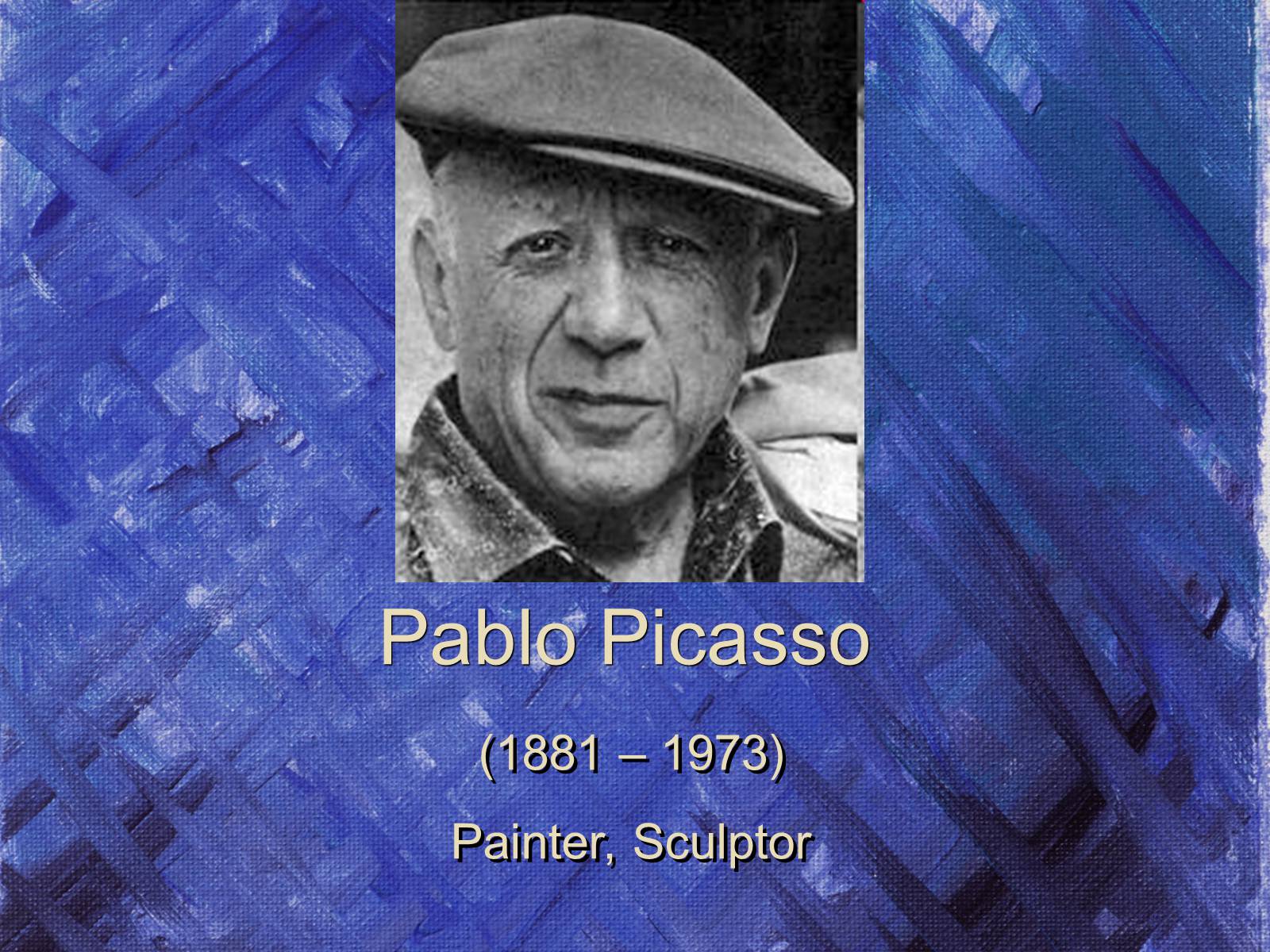 Picasso was born October 25, 1881 in Málaga, Spain. His father was a painter and art professor. Pablo showed artistic talent from a very early age – his first word was the spanish for “pencil”. At age 13, his father convinced the school of fine arts to take him on as a student and rented him a room so that he could have somewhere he could be alone to paint. 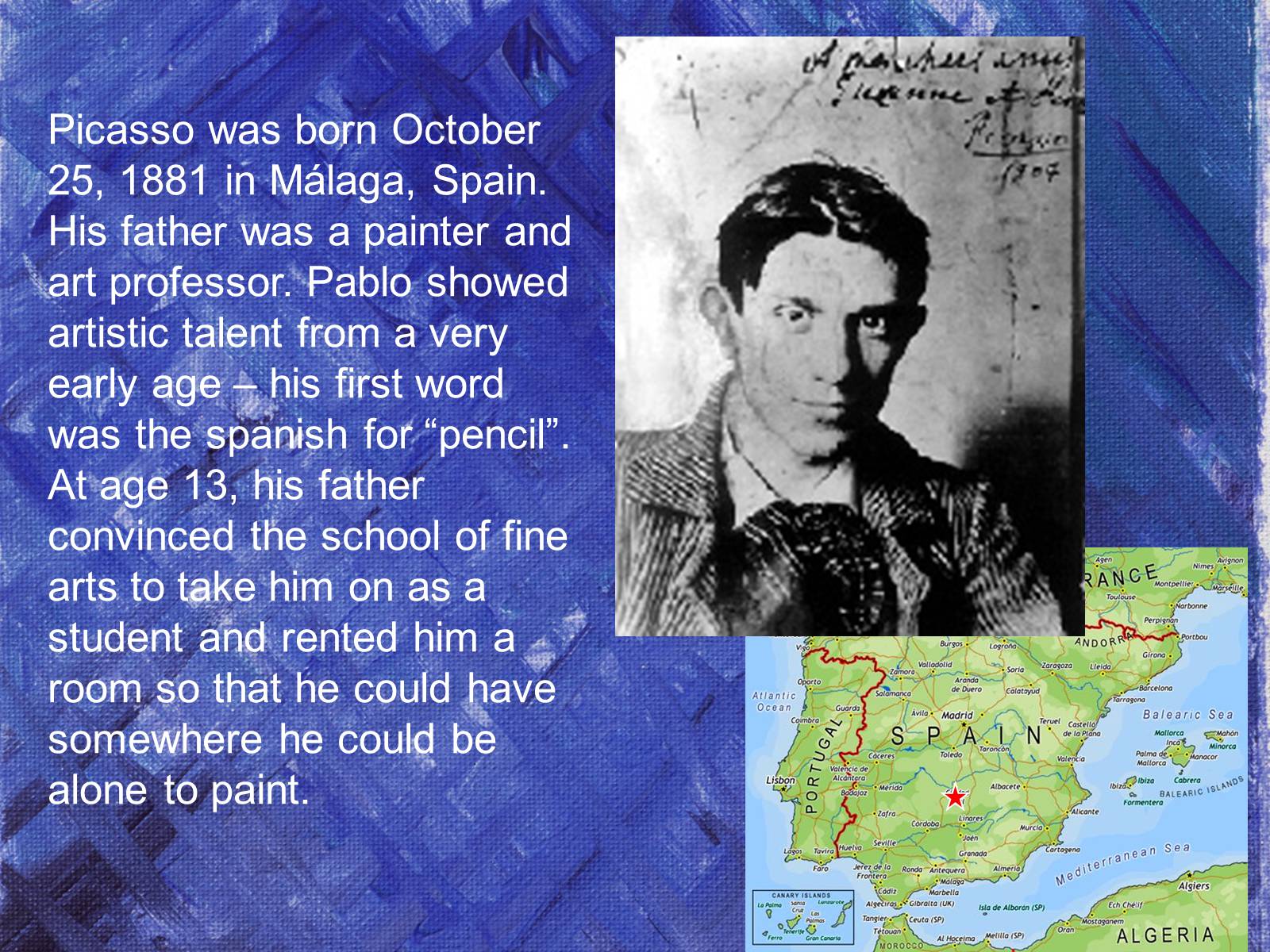 After studying at the best art school in Spain,picasso traveled to Paris. He stayed there and lived among a group of fellow artists, poets and writers, most of whom became famous. He was very poor, sometimes burning his paintings to keep warm. In 1905, he became a favorite of an influential american art patron living in Paris, Gertrude Stein. She would help launch his career. 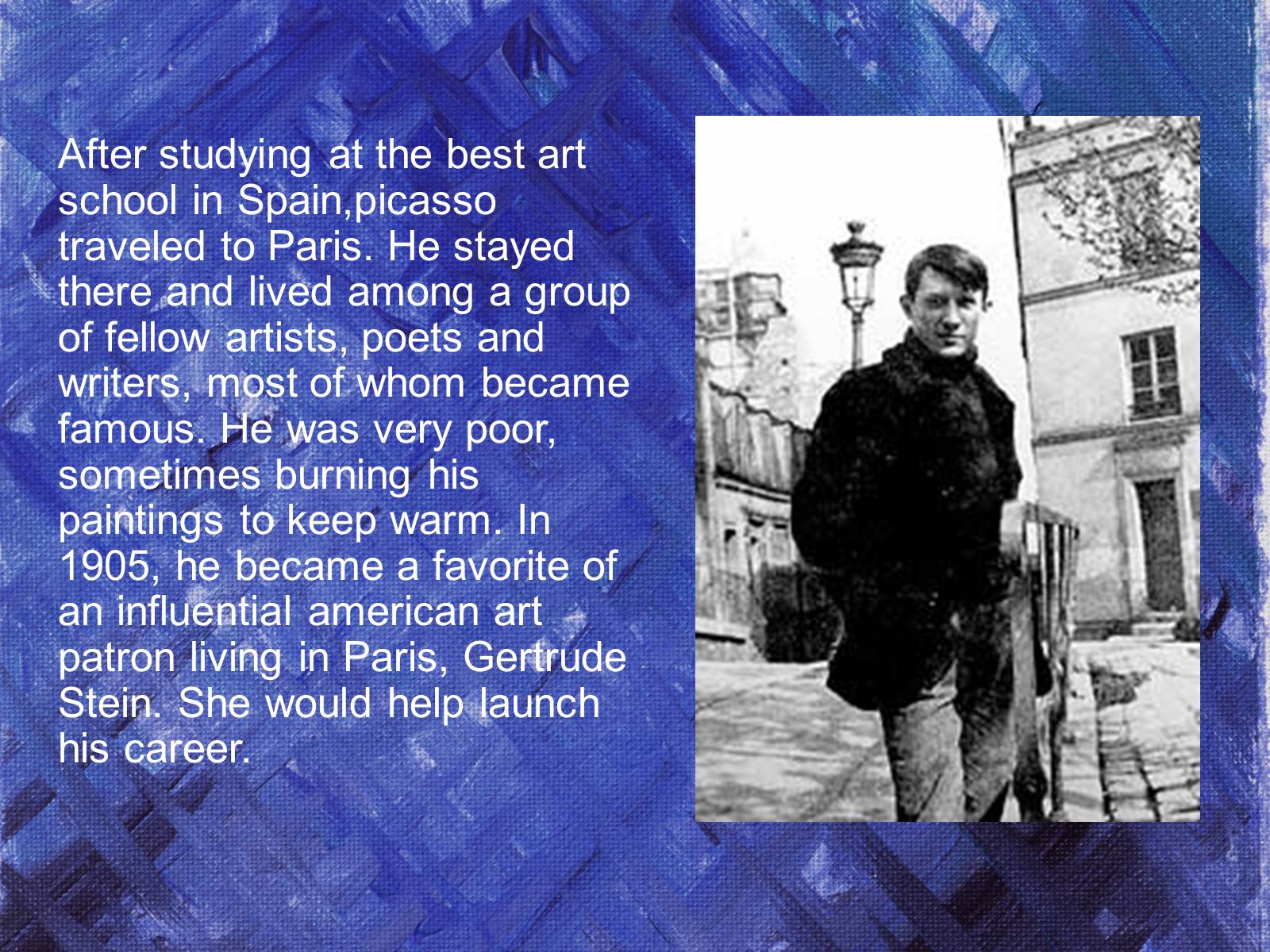 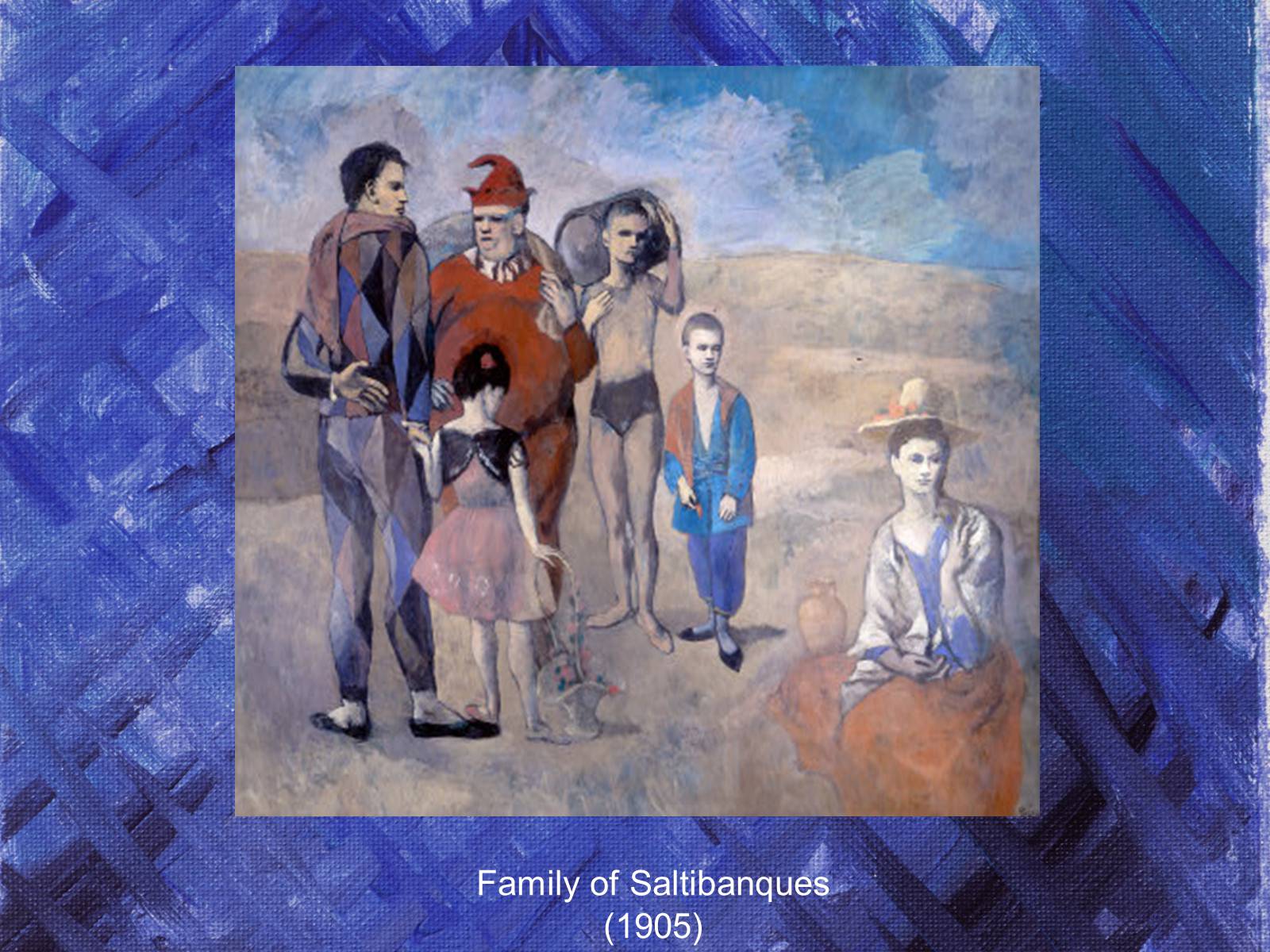 Picasso lived through World War I, the Spanish Civil War, and World War II, refusing to fight for any side or country. In 1944, he joined the communist party, although he had some differences with them and was never an ardent communist.
Picasso had many relationships over his lifetime with different women. He married twice and had four children with three different women.
Portrait of Daniel-Henry Kahnweiler (1910)kahnweiler was an art dealer who was an early believer in Picasso's talent 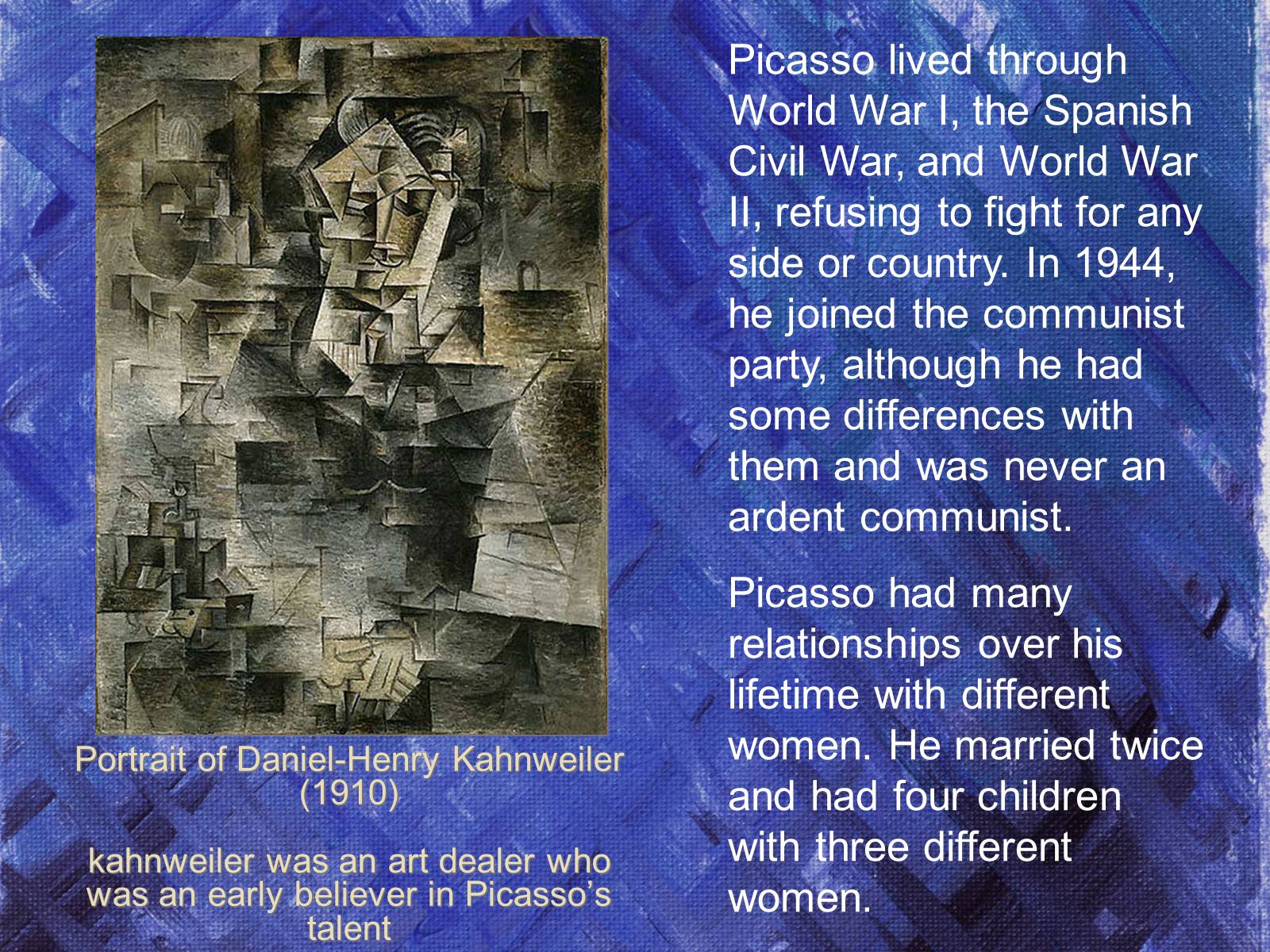 Picasso's work is sorted into “periods”. Each period is distinctive for the style, mood, and colors he used. His Blue Period is full of sad, serious paintings mostly done in blues and greens. The figures in these paintings look thin and hungry.
Femme aux Bras Croisés (1902)
The Old Guitarist (1903) 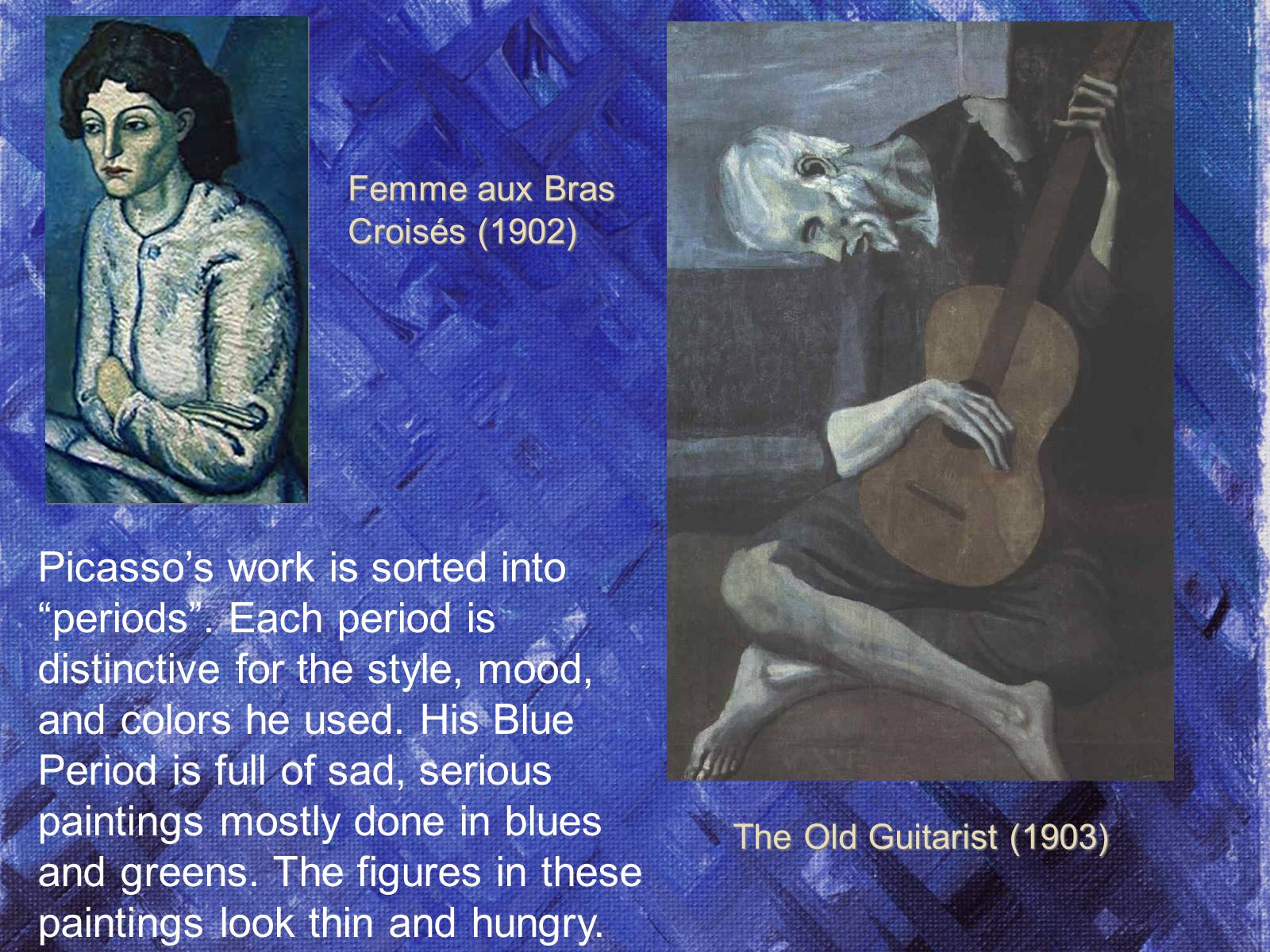 His Rose Period was a bit more upbeat, using oranges and pinks and featuring many circus people and acrobats. Harlequins would become a symbol for Picasso that would repeat in his paintings for years.
Friendship (1908)
Boy with a Pipe (1905) 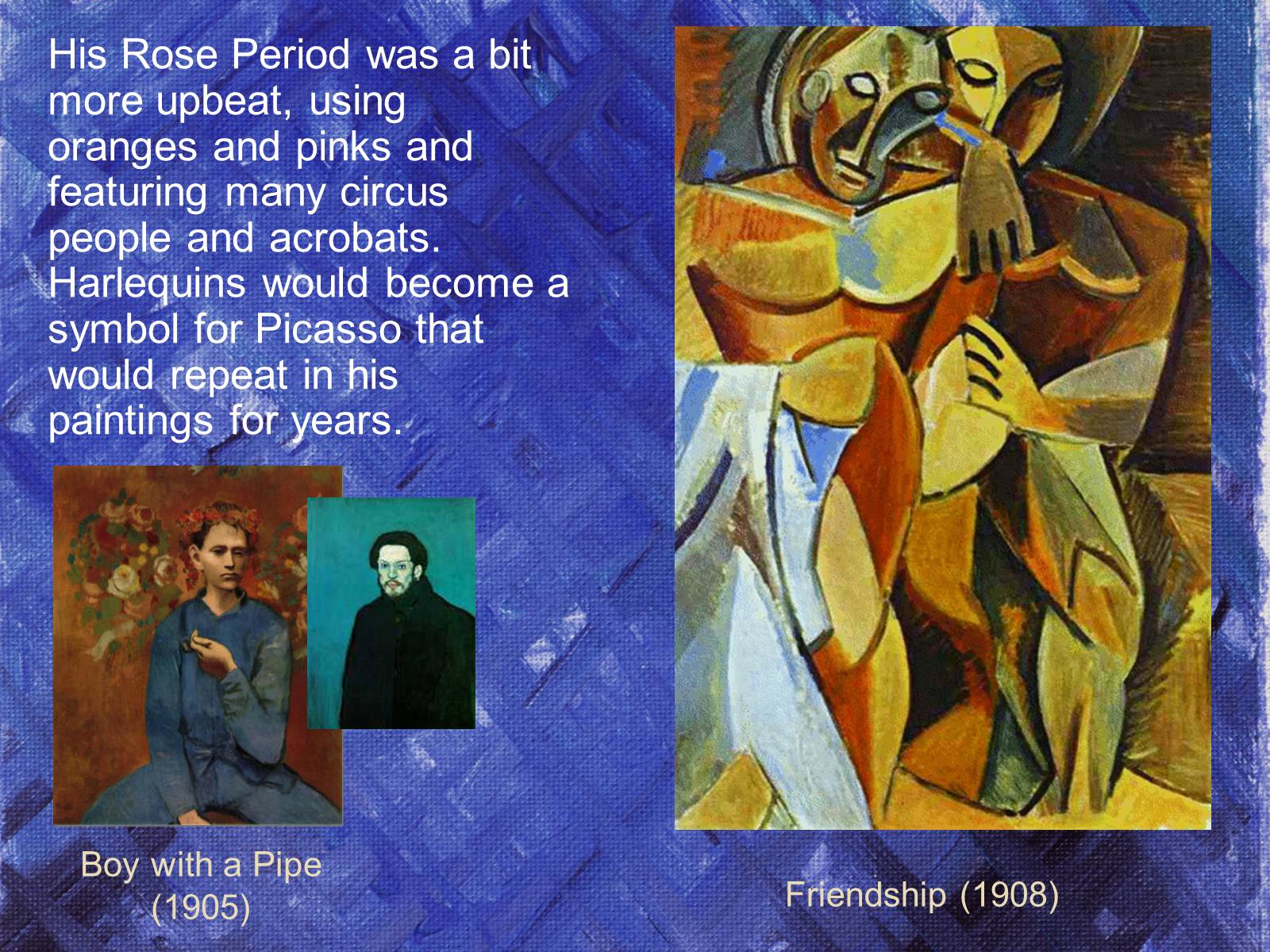 The Guitar painter (1910)
Along with fellow painter George Braque, Picasso pioneered a new style of painting called “Cubism”. The artists analyzed subjects and broke them down into the shapes that composed them. Sometimes they cut up pieces of newspaper or wallpaper and glued them onto the paintings. This was the first time collage was used in fine art. 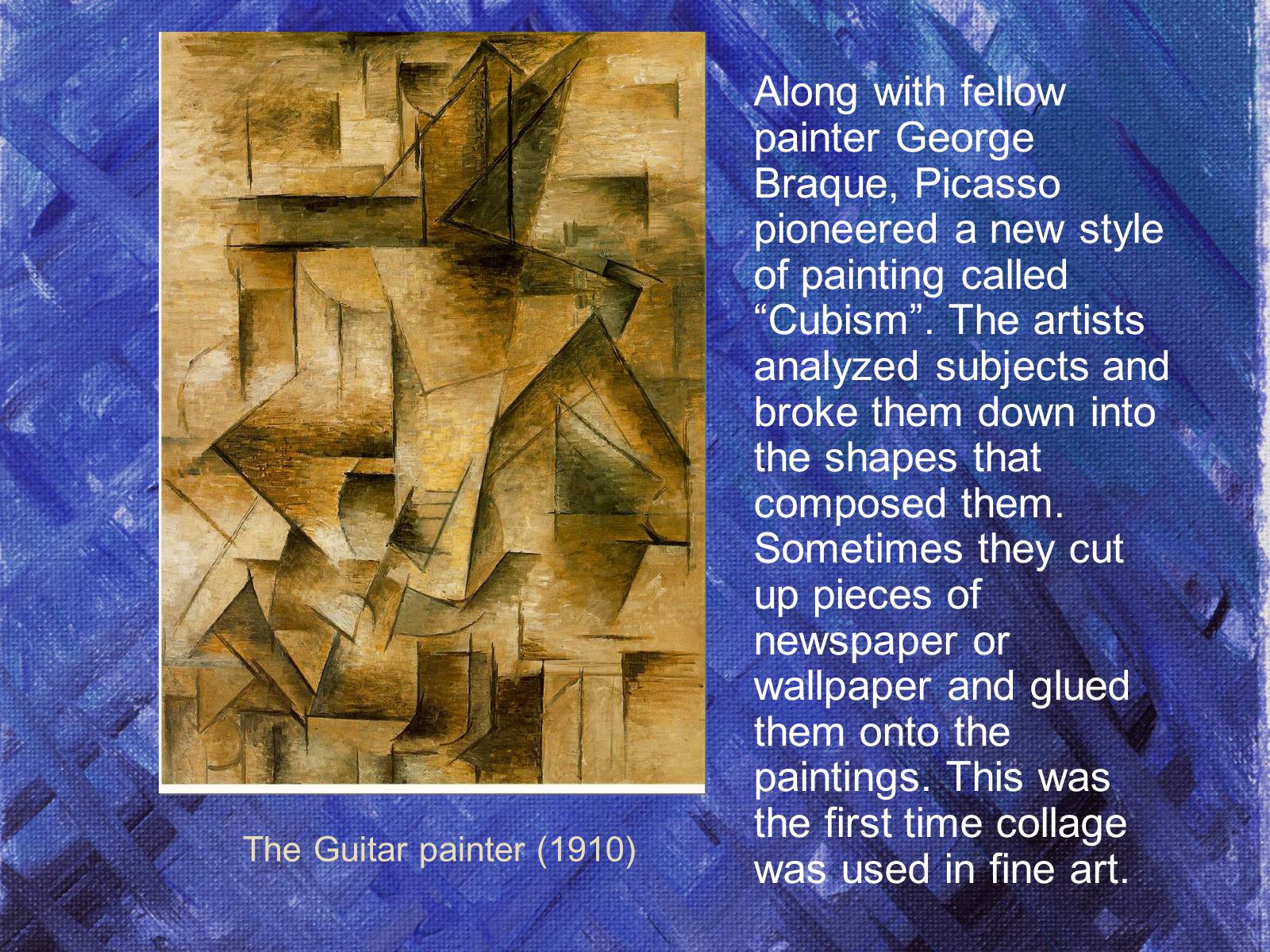 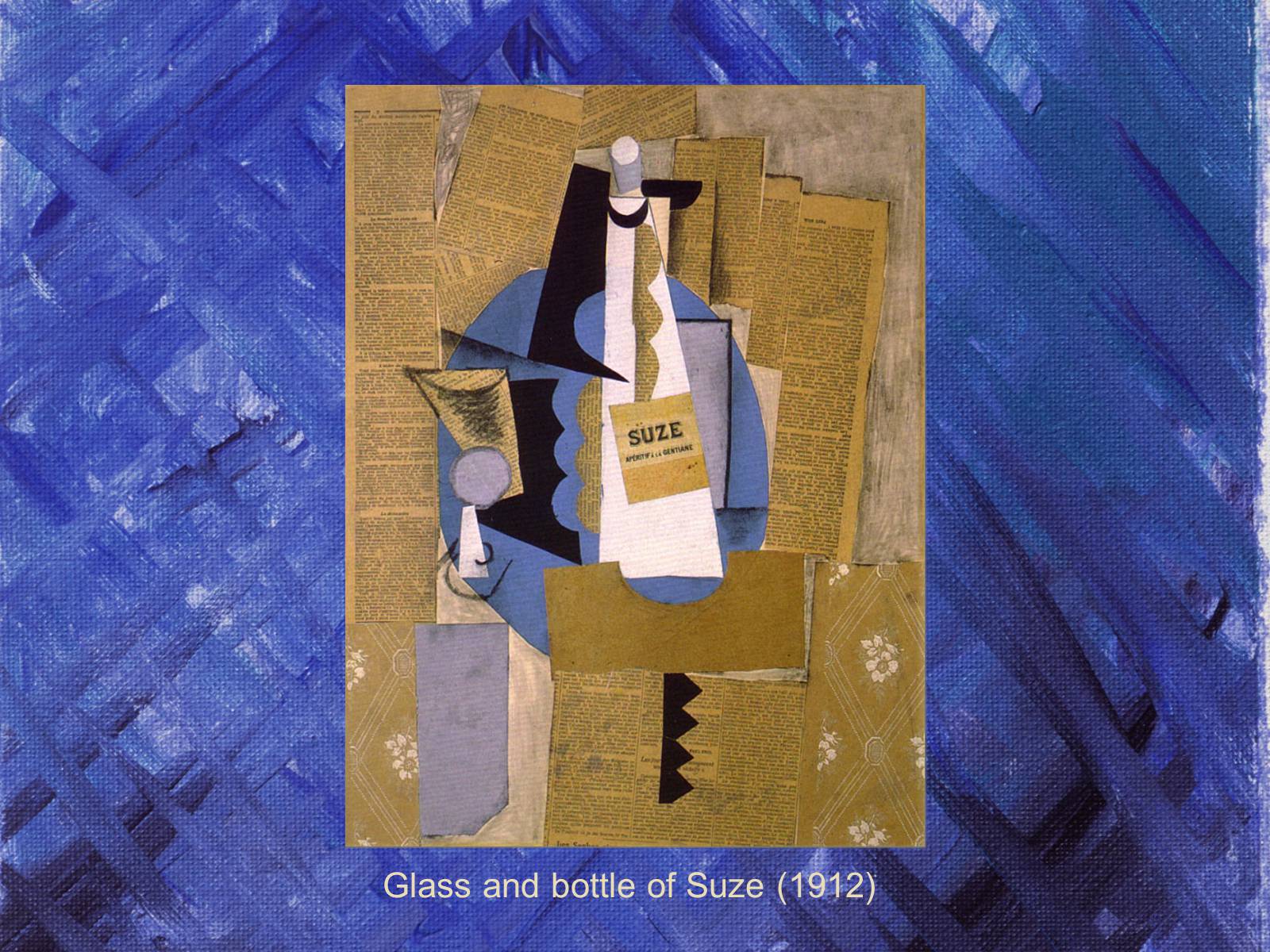 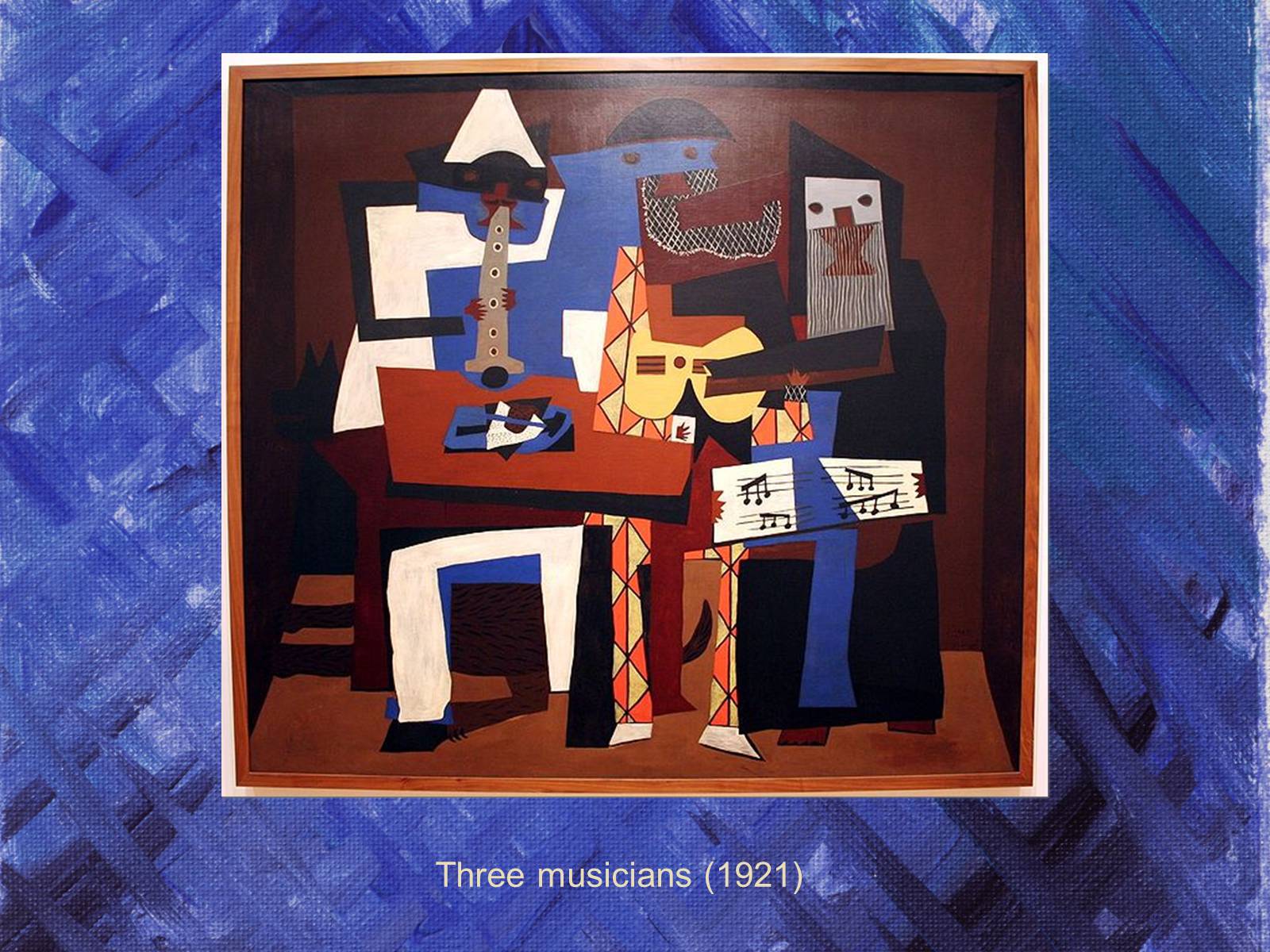 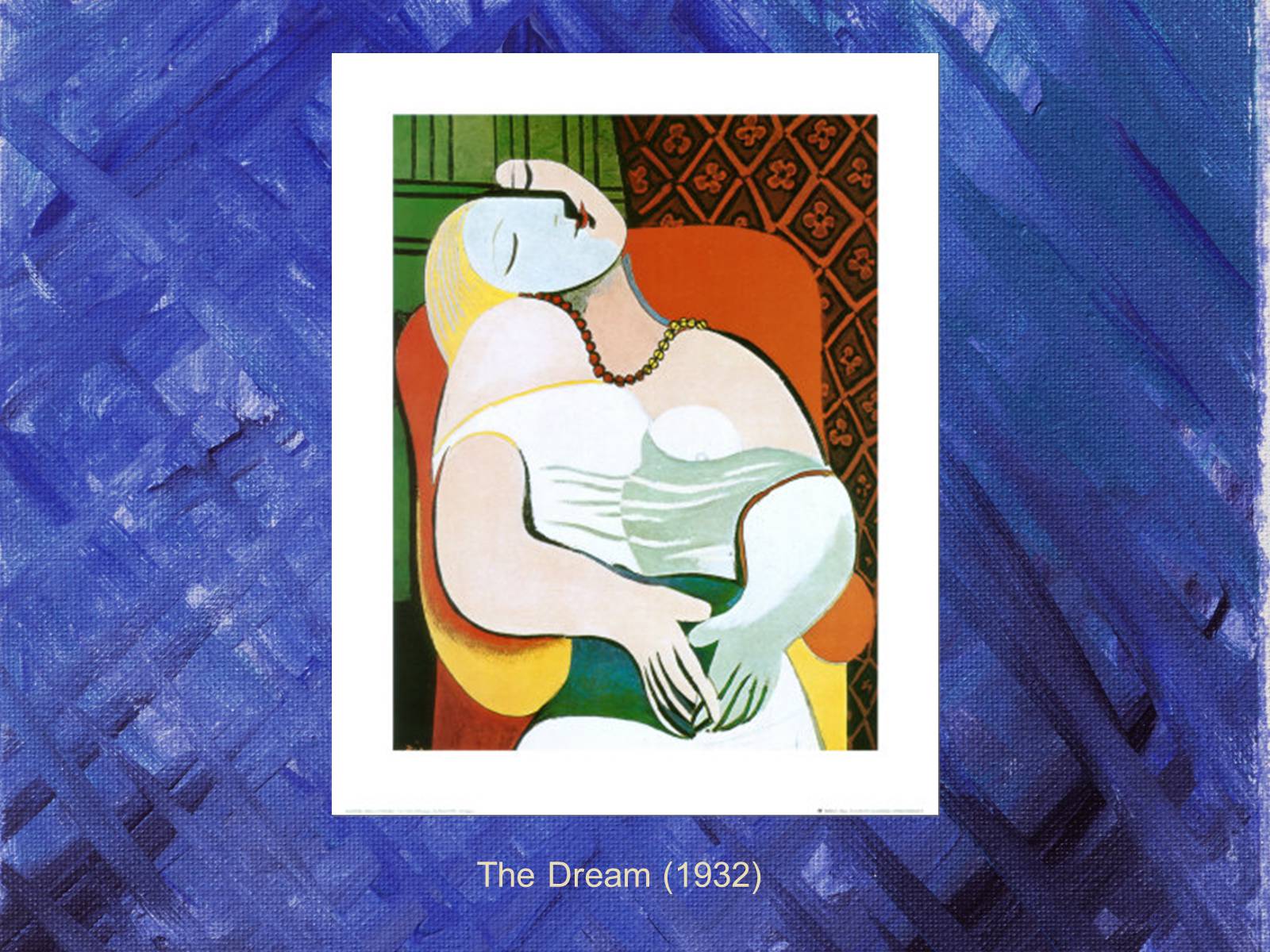 Guernica (1937)
One of Picasso's most famous paintings, this one represents the German bombing of Guernica during the Spanish Civil War. It was a statement about the brutality and hopelessness of war. 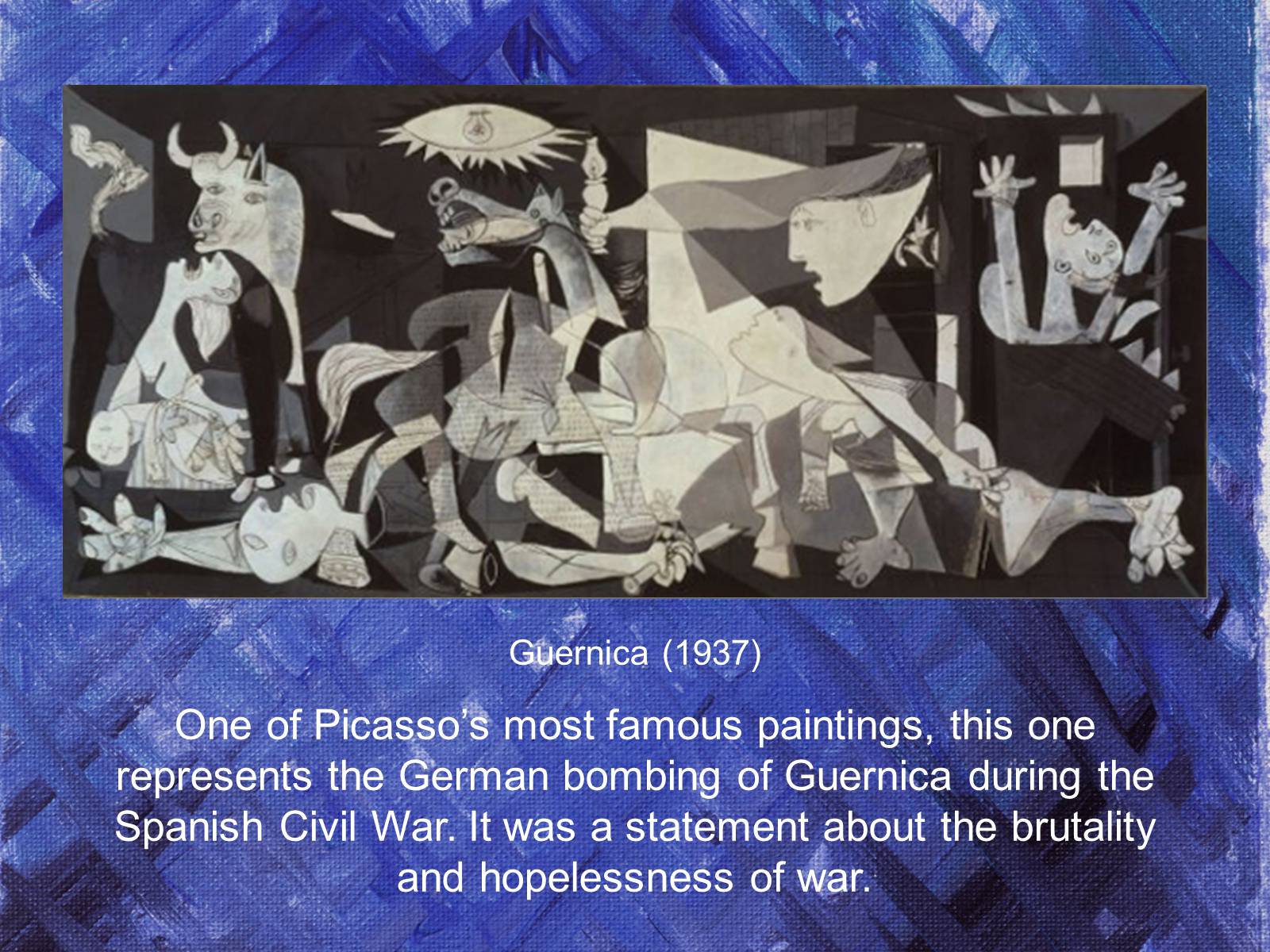 Chicago Picasso (1967)
Picasso was also a sculptor. In the mid 1960s, he was hired to create a huge (50 foot high) public sculpture to be built in Chicago. He was excited about the project, designing something very ambiguous and controversial. What it is meant to represent, no one really knows, is it a bird, a horse, a woman, or something abstract? Picasso refused the $100,000 fee he was offered, instead donating the sculpture to the people of Chicago. 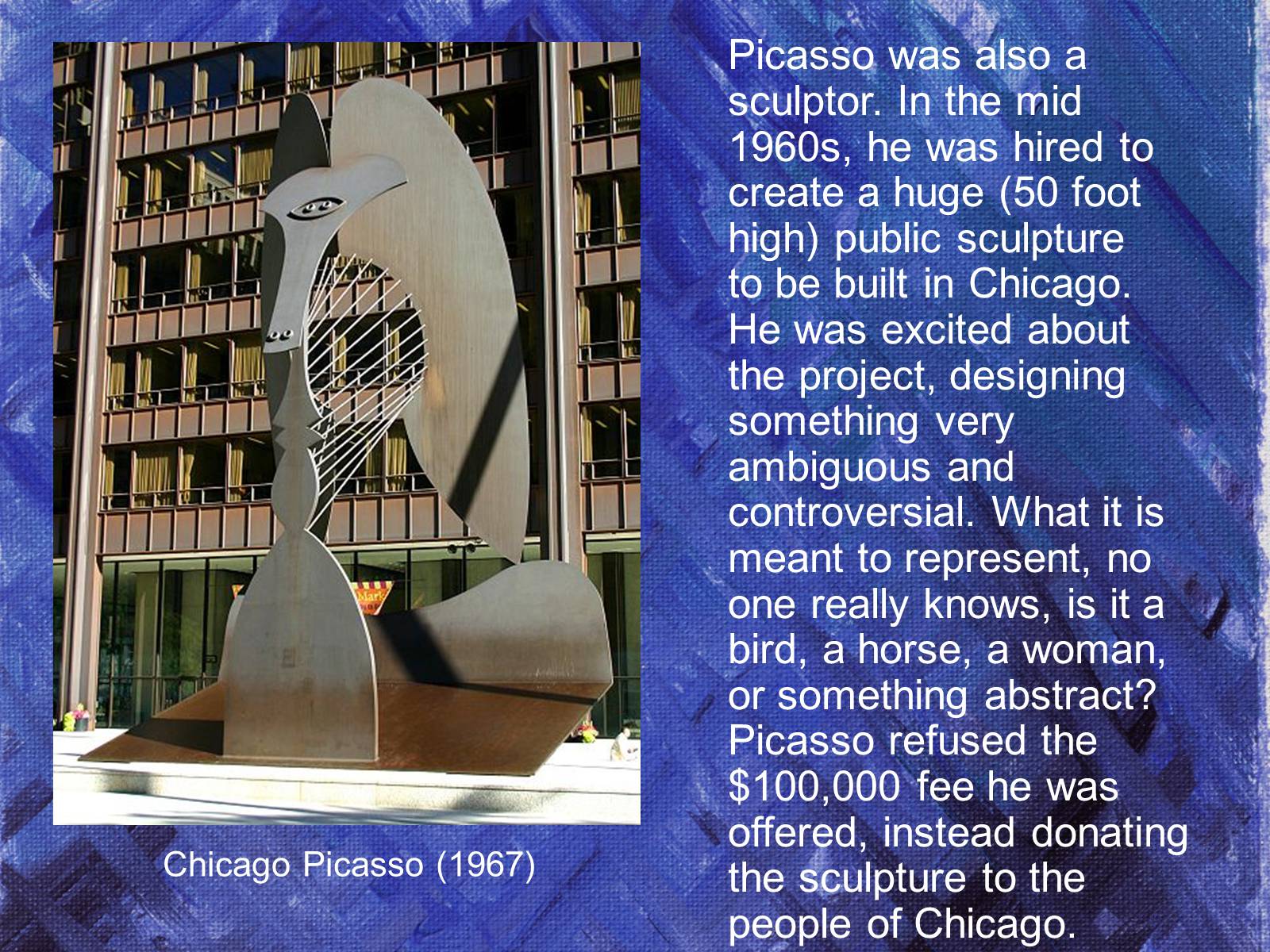 Picasso was hugely successful during his long career, earning enough money to live very well and being a celebrity. In addition to his enormous body of work he also had a film career, appearing in several films. He always played himself.
Pablo Picasso died on April 8, 1973 in Mougins, France while he and his wife were having a dinner party. His last words were “Drink to me, drink to my health, you know I can't drink any more.” He was buried in France on a piece of private property he and his wife owned.
Picasso was an extremely prolific artist, creating 1,885 paintings, 1,228 sculptures, 2,880 ceramics, about 12,000 drawings, thousands of prints and many tapestries and rugs. 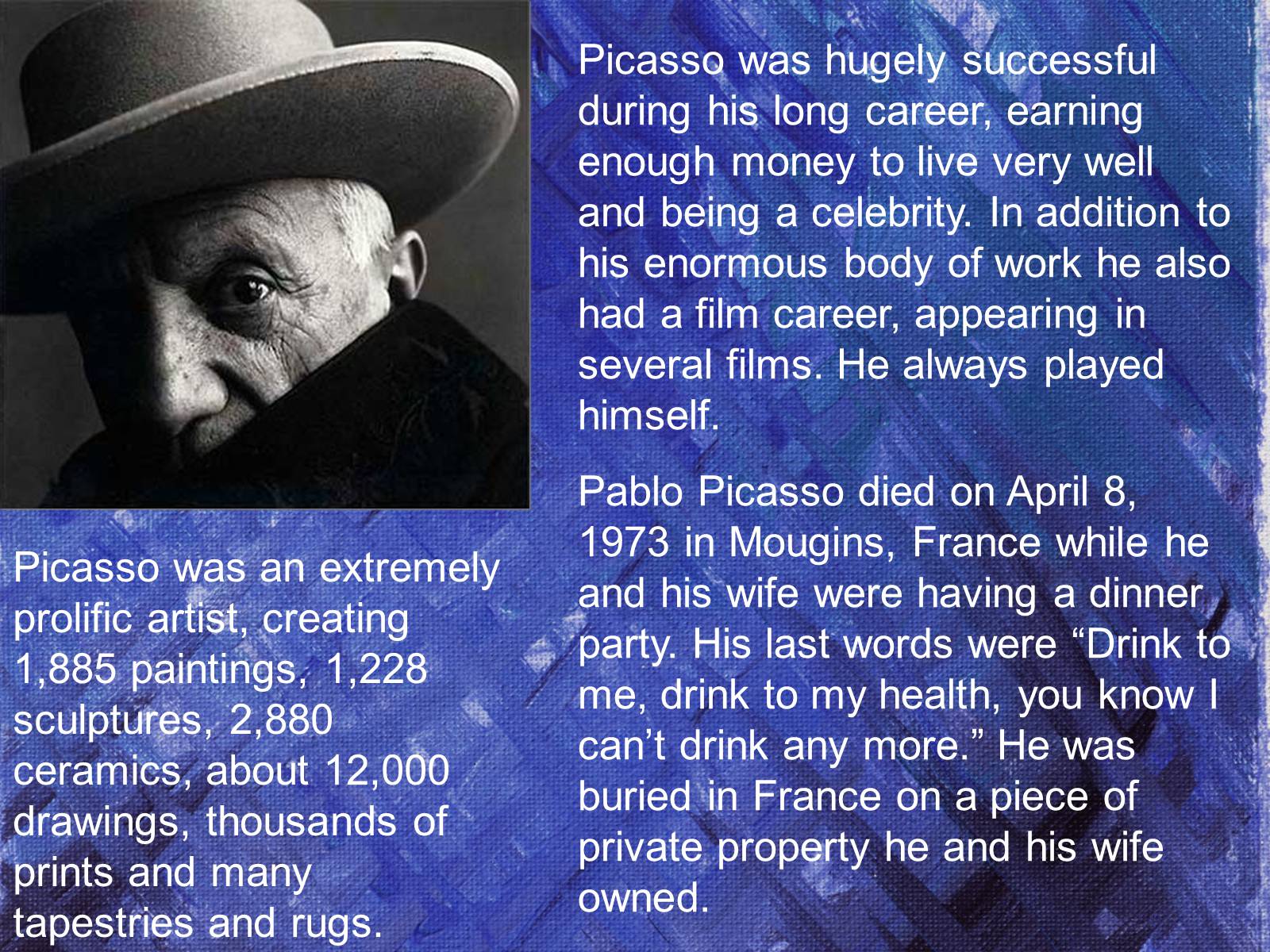 “There are painters who transform the sun to a yellow spot, but there are others who with the help of their art and their intelligence, transform a yellow spot into the sun”
– Pablo Picasso 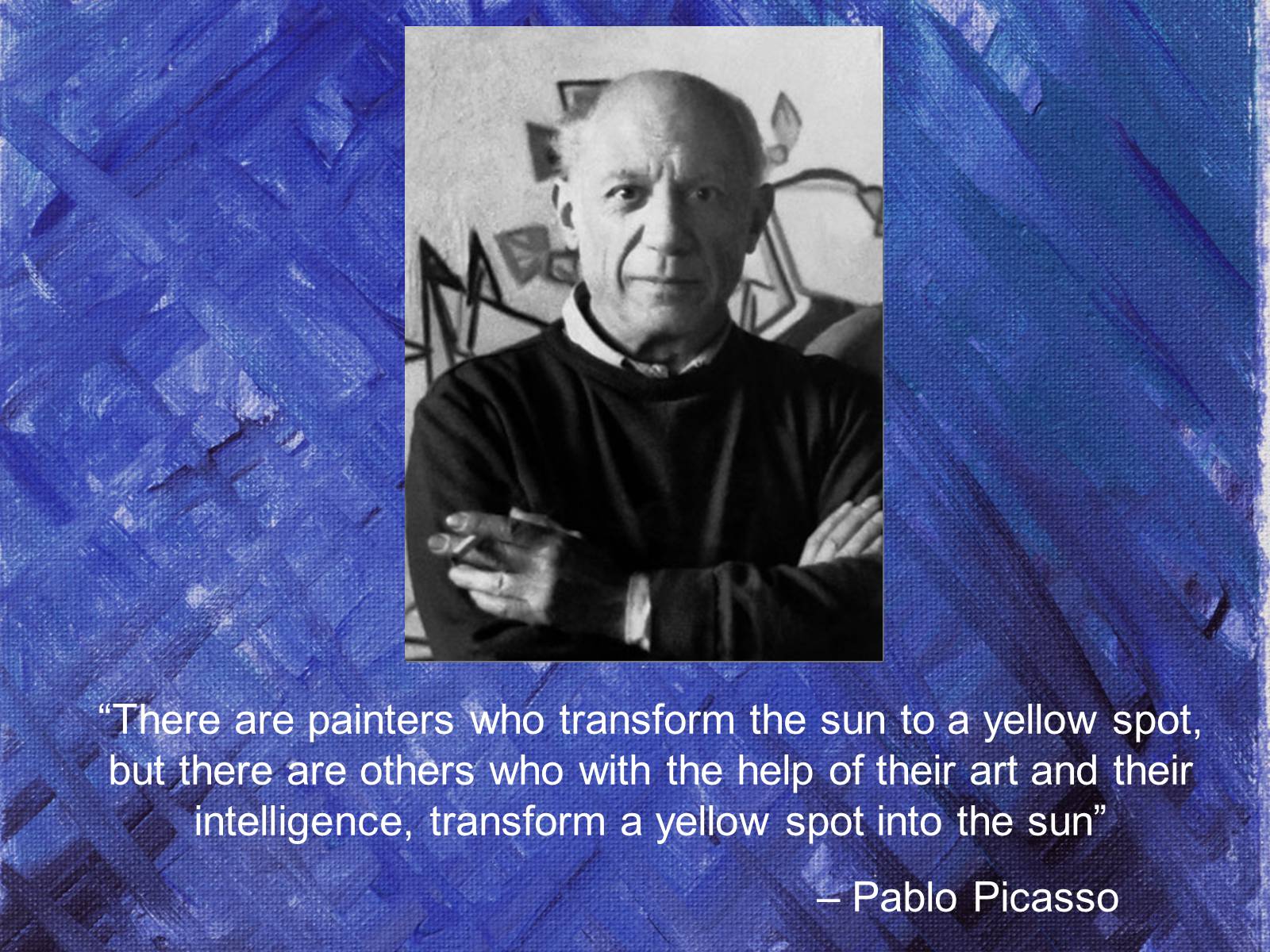 Picasso left no will when he died, so his estate taxes were paid in the form of paintings – his own and some he collected by other artists. These paintings are housed in the Musée Picasso in Paris.
Several paintings by Picasso rank as the most expensive paintings in the world, selling for over $100 million apiece. More of his paintings have been stolen than those of any other artist – to date, 550 of his works are listed as missing.
Musée Picasso, Paris 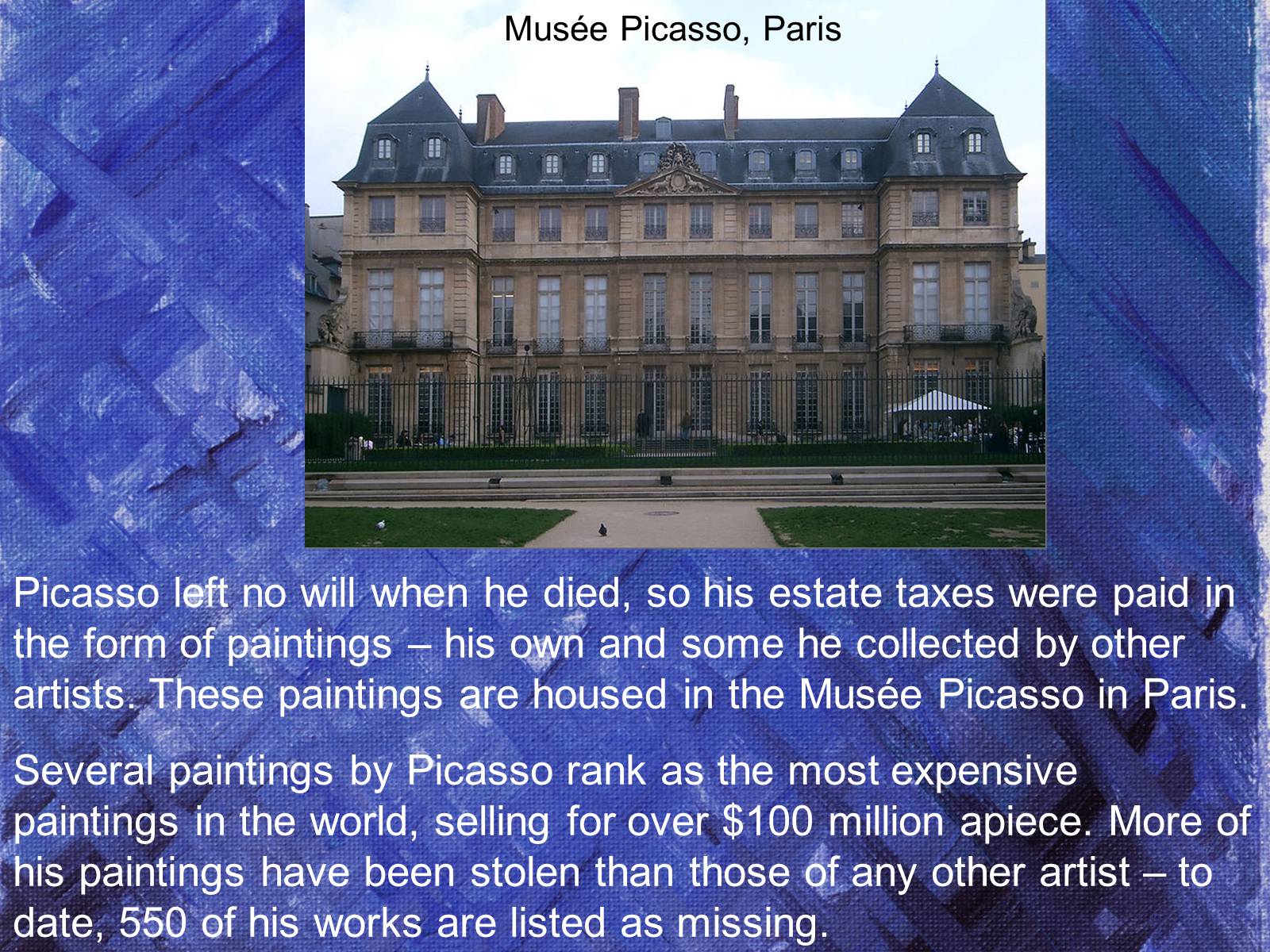