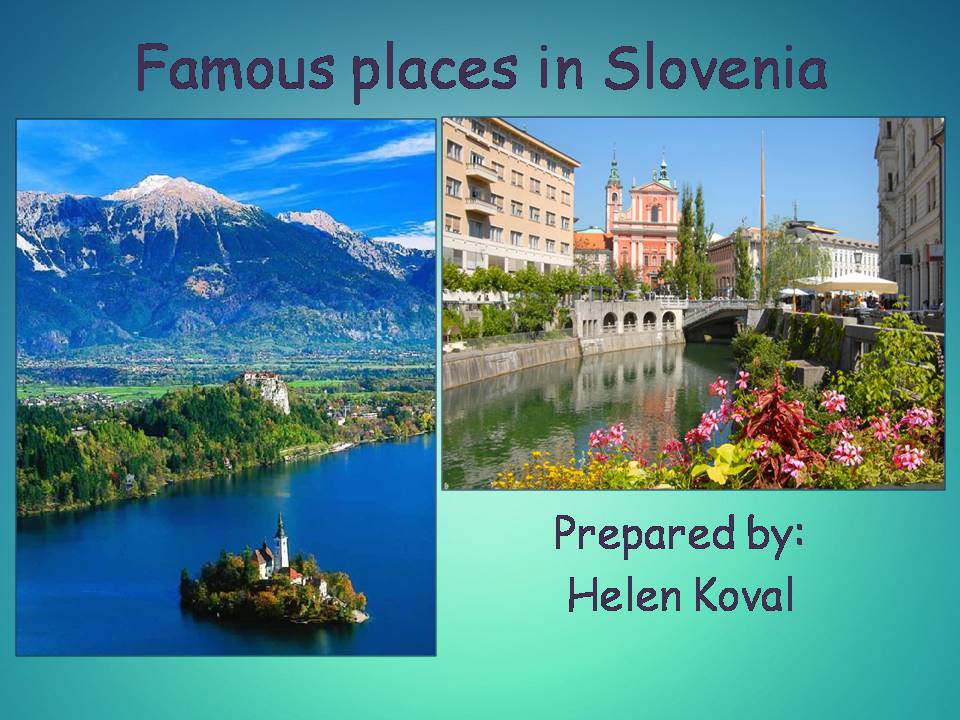 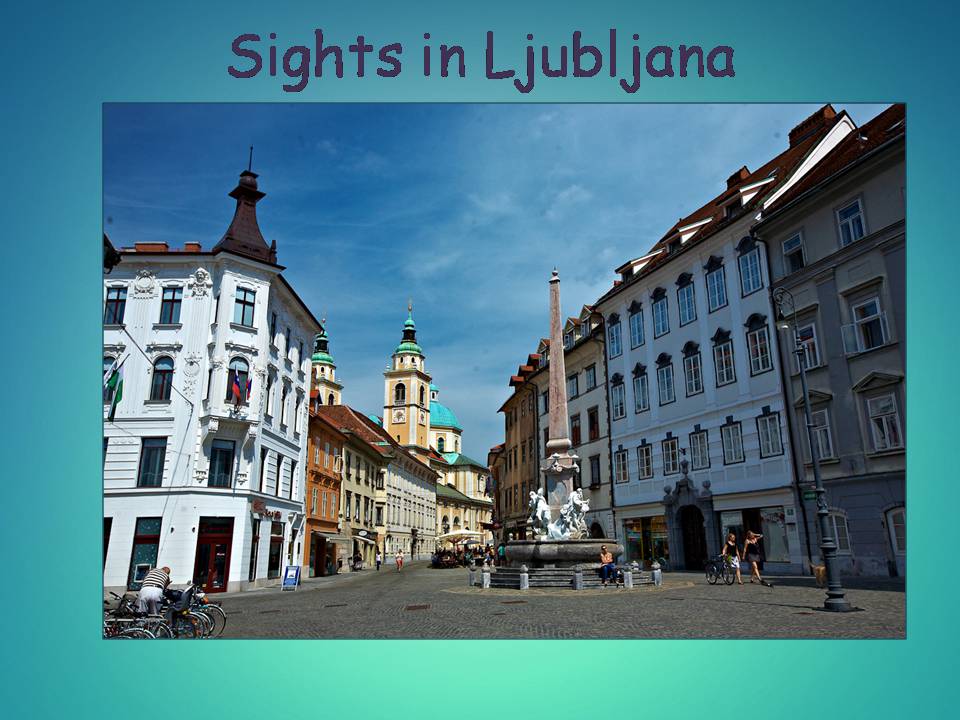 Ljubljana Castle
The castle is located on a hill above the old town, with a magnificent view over the city. The exact date of foundation is not available, the first mention of the castle accounts for 1144. In laying the castle is still preserved
fragments of Celtic, Illyrian and Roman
structures.

Palace of the seminary
It is located behind the Cathedral and was built by the architect Carlo Martinutstsi beginning of the XVIII century. The building boasts an ornate entrance portal, which in 1714 was cut in the studio stonemason Luke Misleya. In the palace of the seminary is located storey seminary library, the first public library in Ljubljana, founded in 1701 on the initiative of members of the Academy. Library holds many valuable manuscripts and printed works. 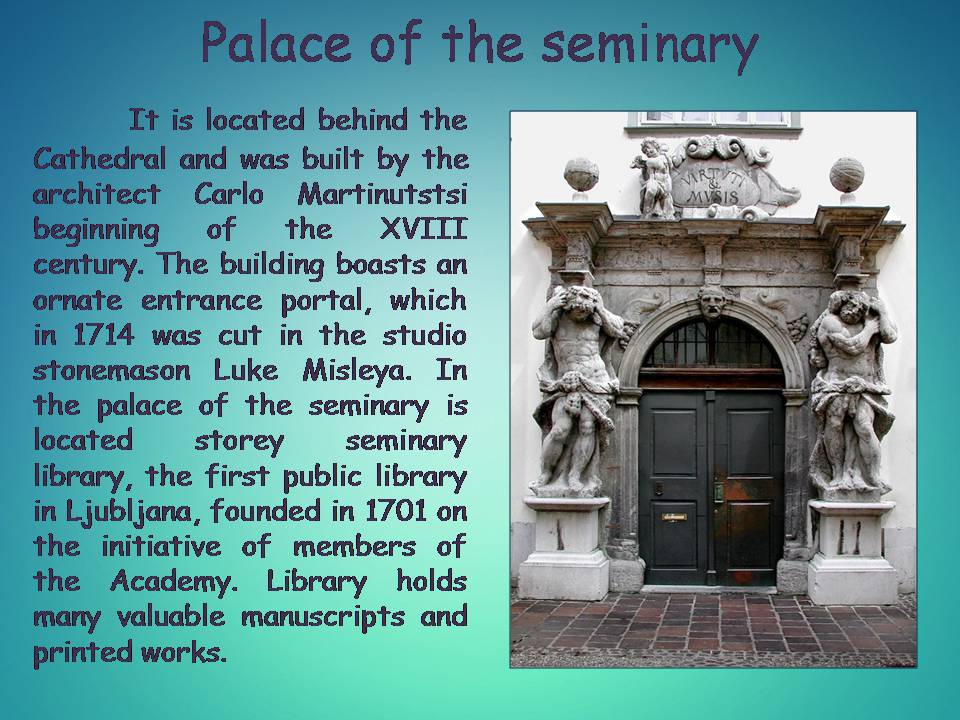 Ancient Town Hall
Old Town Hall is located in the center of the old town and was built in 1484 and rebuilt in the XVIII century by the architect Gregor Maček. The facade of the building in the style of the late Baroque. Numerous decorations - decorative trim in the style of sgraffito, sculptures of mythological themes, map Ljubljana XVII century above the portal, leading to one of the two courtyards - Town Hall was converted into a true gem of Ljubljana. 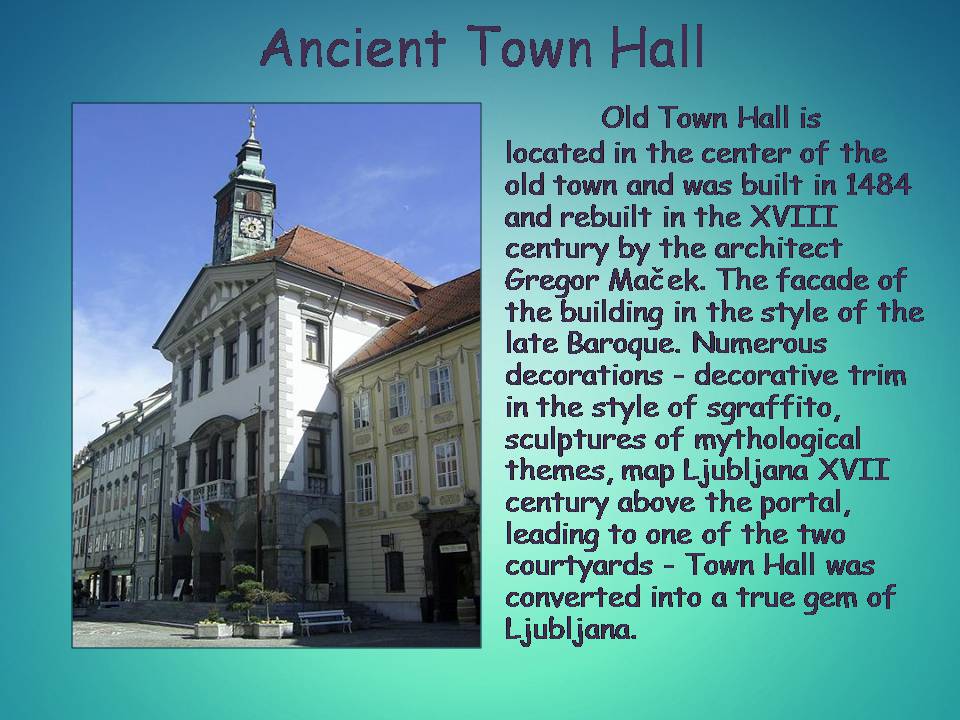 Triple Bridge
Triple Bridge - three divergent fan of the bridge over the Ljubljanica, constructed under the project of J. Plecnik, the symbol of Ljubljana. In the early twentieth century, the old bridge, unable to cope with road traffic, wanted to destroy, but the architect Jože Plečnik expanded and completely transformed it. In 1929-1931, nearby were built two pedestrian bridges that complement the first. 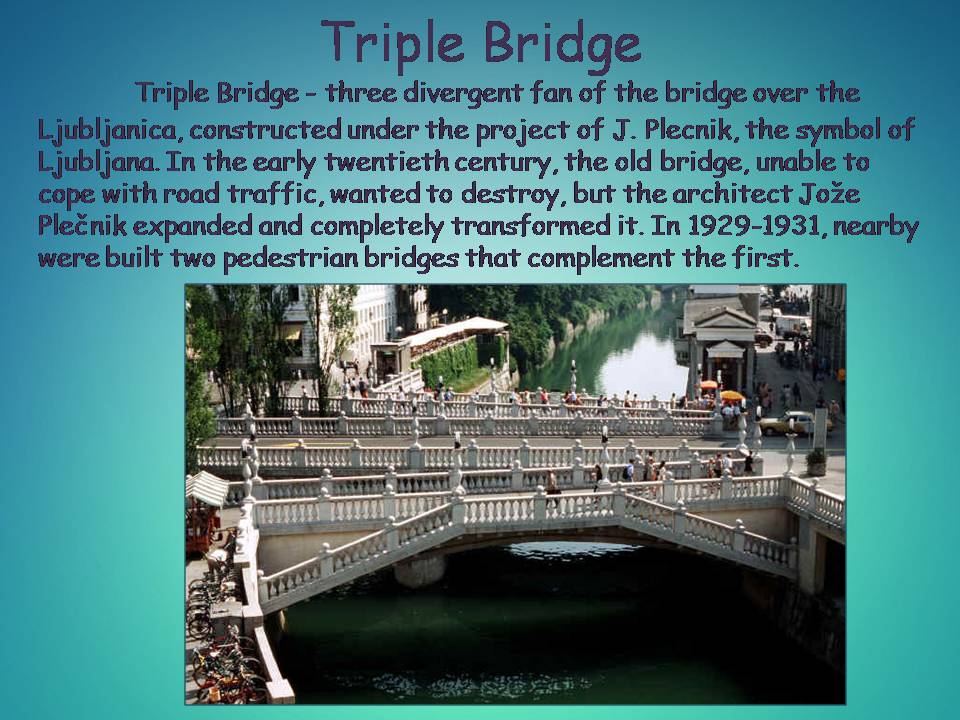 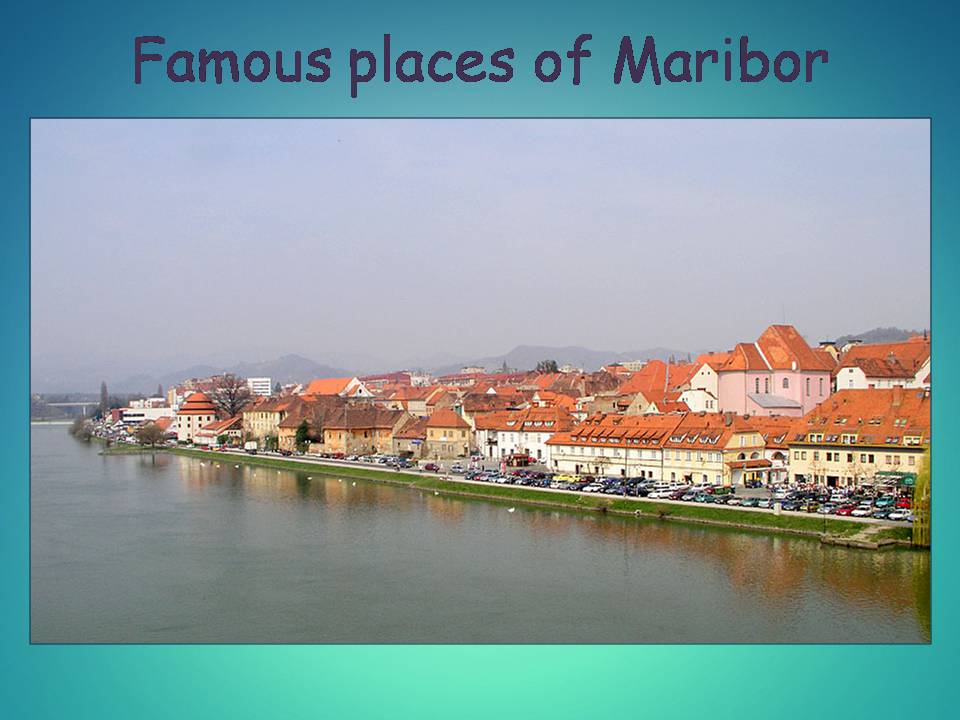 Old vine Maribor
Old vine Maribor is the oldest representative of the flora on the planet, what is most surprising is the fact that the vine still bears fruit. Vine age is more than 400 years, the plant is recorded in the Guinness Book of Records. Maribor vine symbolizes the rich wine culture of Maribor. Annually with vines harvested from 35 to 55 berries, which are sealed in glass bottles by a famous artist Oscar Kogoyem, symbolizing the precious gift of land. 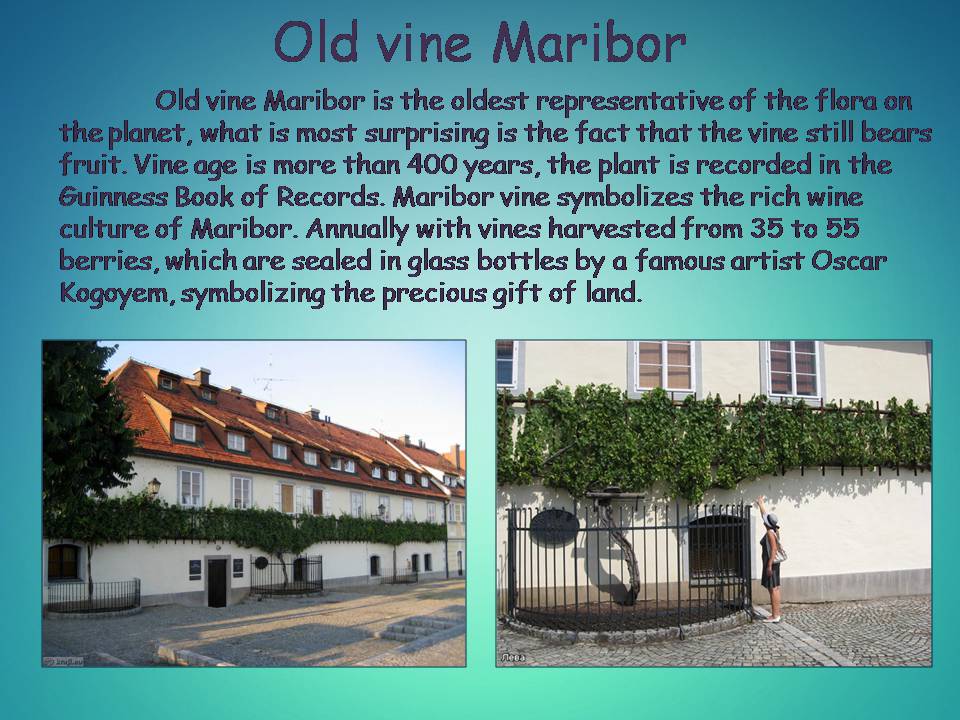 National Liberation Monument
Bronze monument of national liberation in 1975 was set in Liberty Square in Maribor. On the monument there are graphical copies of public proclamations regarding the executions of prisoners and rebels sentenced to death during the Second World War. Monument better known to locals as "Koyak" because its appearance monument reminds them bald detective Theo Koyaka from the same American police series. 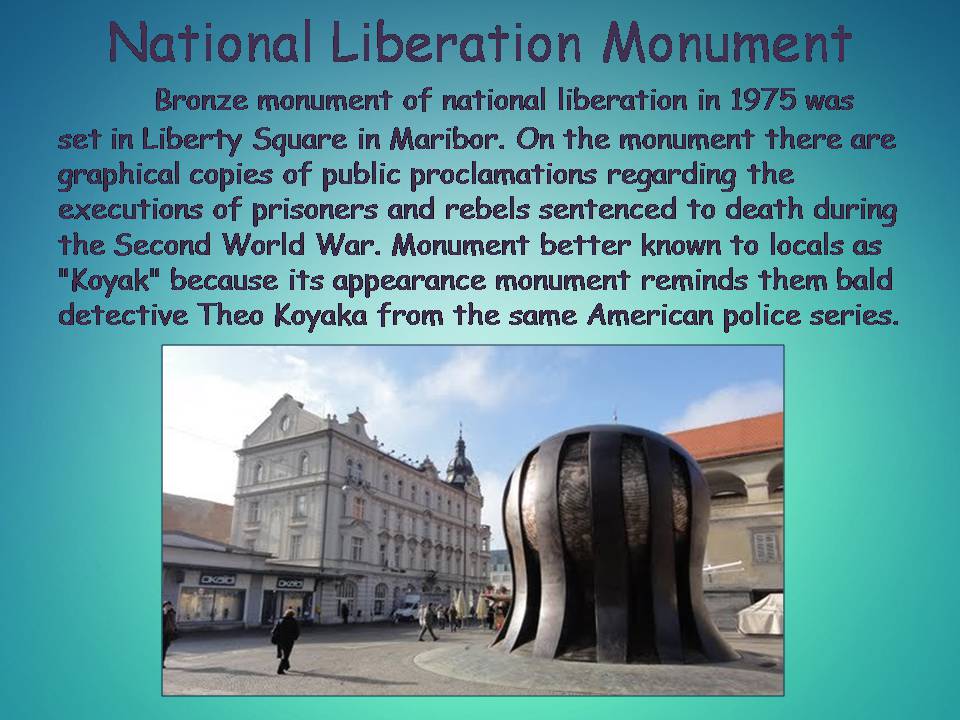 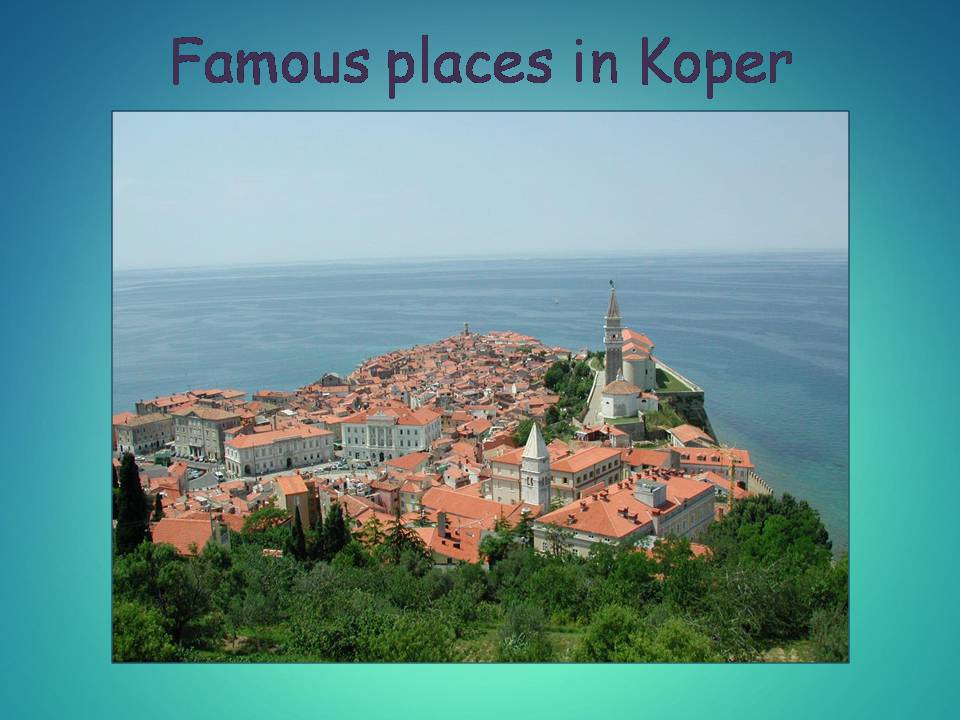 The city bell tower
In Koper If you overcome the stairs in 204 steps, you can enjoy magnificent views of the city and surroundings from the top of the bell tower. The total height of the tower is 54 meters, an observation platform located at a height of 43 meters. Bell tower was once part of the Roman fortifications. 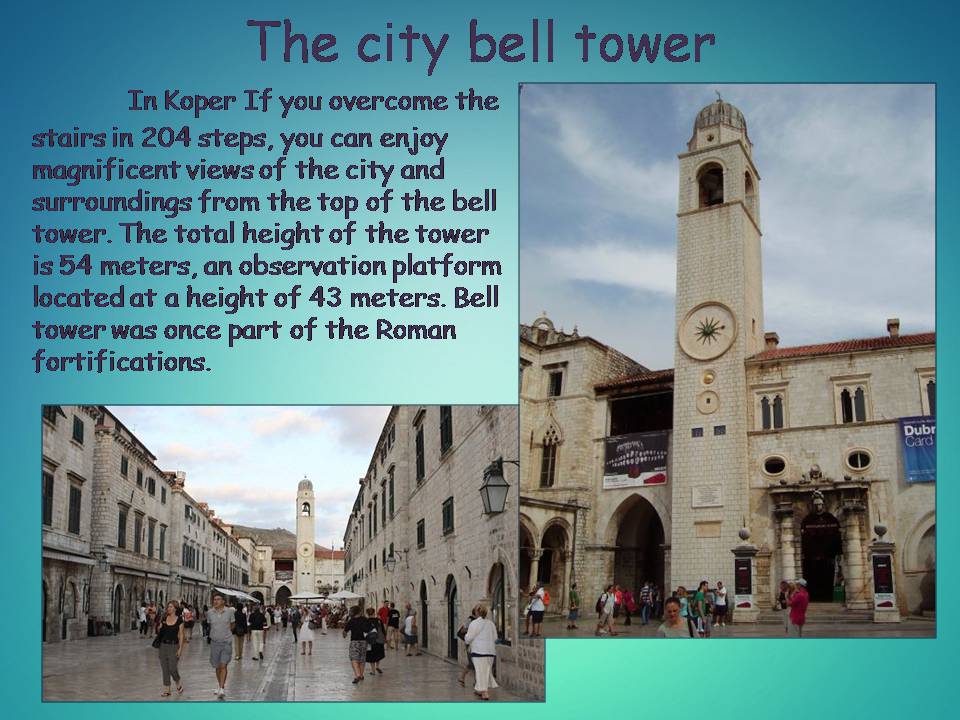 Muda Gate
Portal is a powerful arch with one opening leading to the city center via a covered city block. Once the gate was customs, through which they were held, all guests of the city, arrived by land. Loggia
Loggia in the Gothic style is located in the northern part of the town square in front of the palace of the Pretoria and it is the exact opposite. The square out of the building, the first floor is decorated with five elegant arches. Loggia was decorated with numerous coats of arms, and was intended for wealthy audience. Praetorian palace
Multi-tiered palace with an external flight of stairs and two wings, which reminiscent of their appearance tower, dominates this part of the area. This is the largest secular building in the city. In 1664 on the facade were overbuilt gibbelino gear, there is also the statue of Justice, clutching a sword. 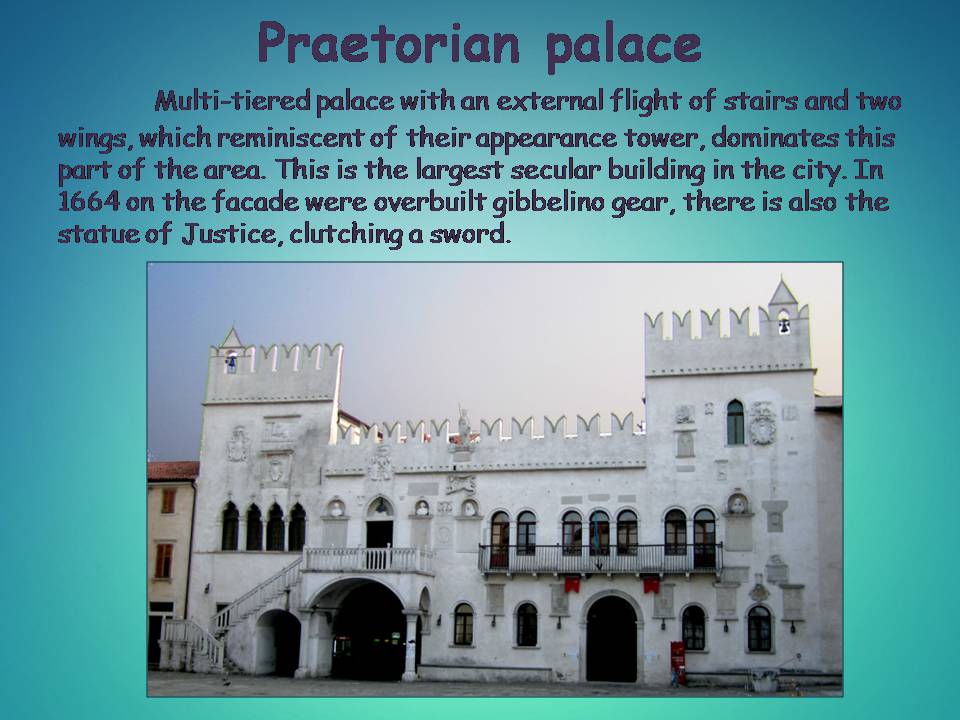 Da Ponte Fountain
Fountain, named after the city mayor and his family decorates a symbolic three-part bridge with a balustrade. Water is delivered on wooden pipes from the tank. Under the bridge is a stone octagonal pool. 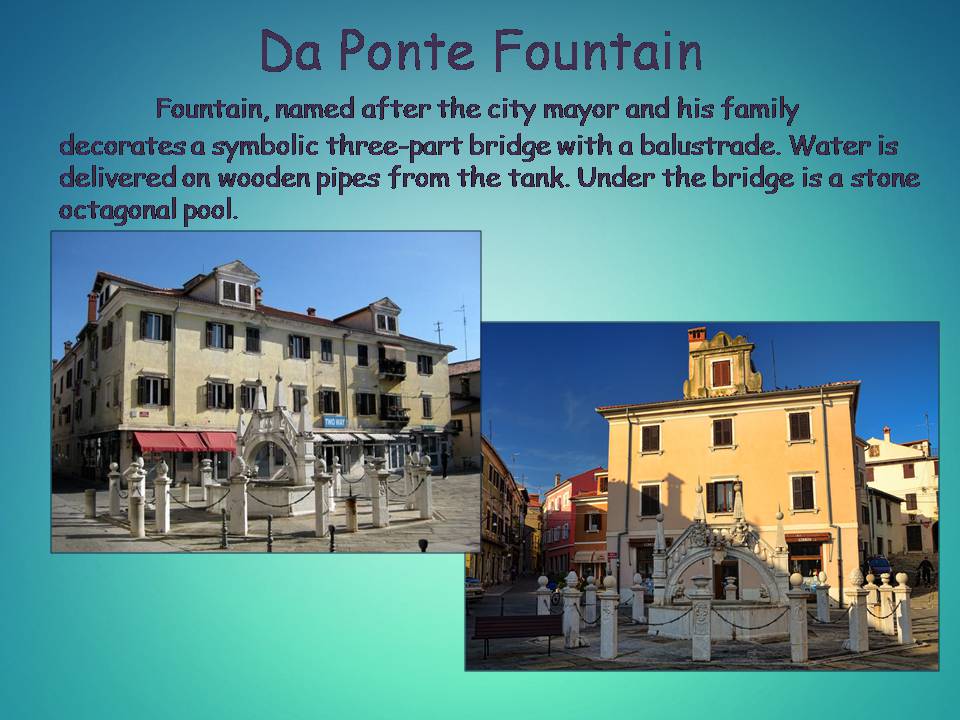 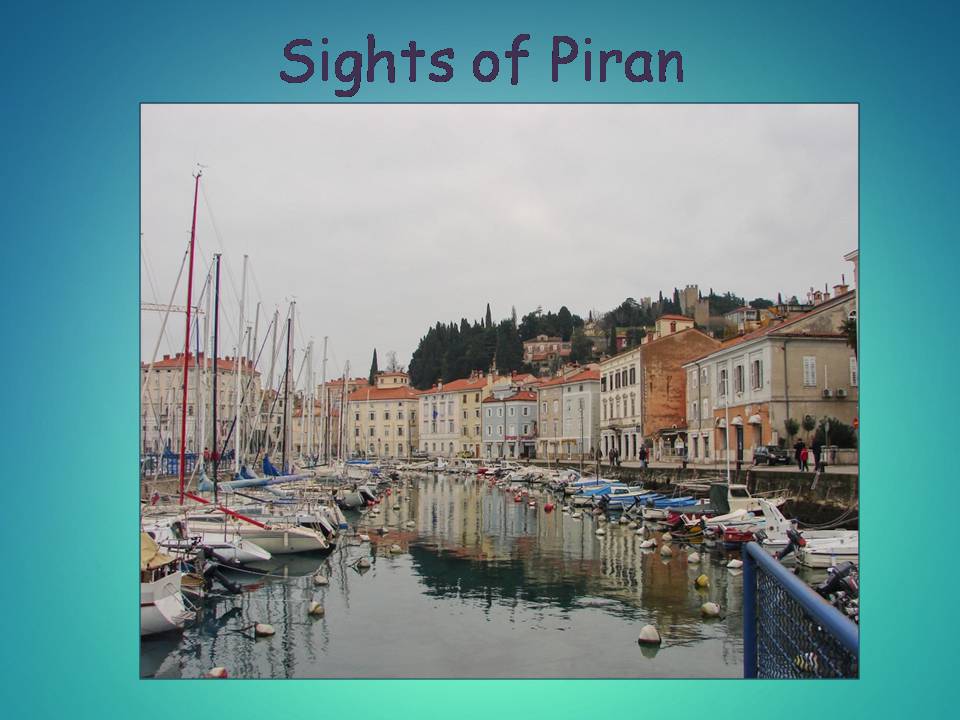 Madonna Cape
Madonna Cape is exactly in the center of Piran. This is a great natural monument, very interesting from the point of view of geo-morphology. Here below the water surface is located a solid rock bottom, on which the entire length of the coastline scattered large and small fragments of rock. 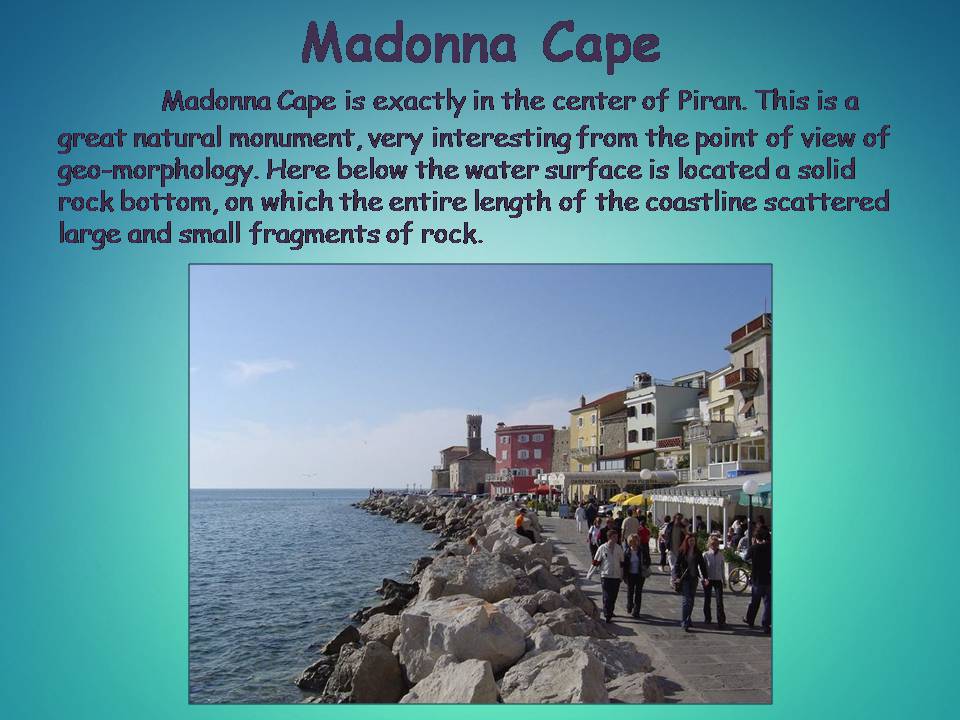 Tartini Square
The place where there is the Tartini Square, formerly served as a haven in which were moored fishing boats. In 1894 it was decided to fill the harbor due to bad smell, dirt, so opposite the new city hall, a new area. In the center is an oval platform of white marble, created by architect Boris Podrecca on the occasion of the 300th anniversary of Tartini. 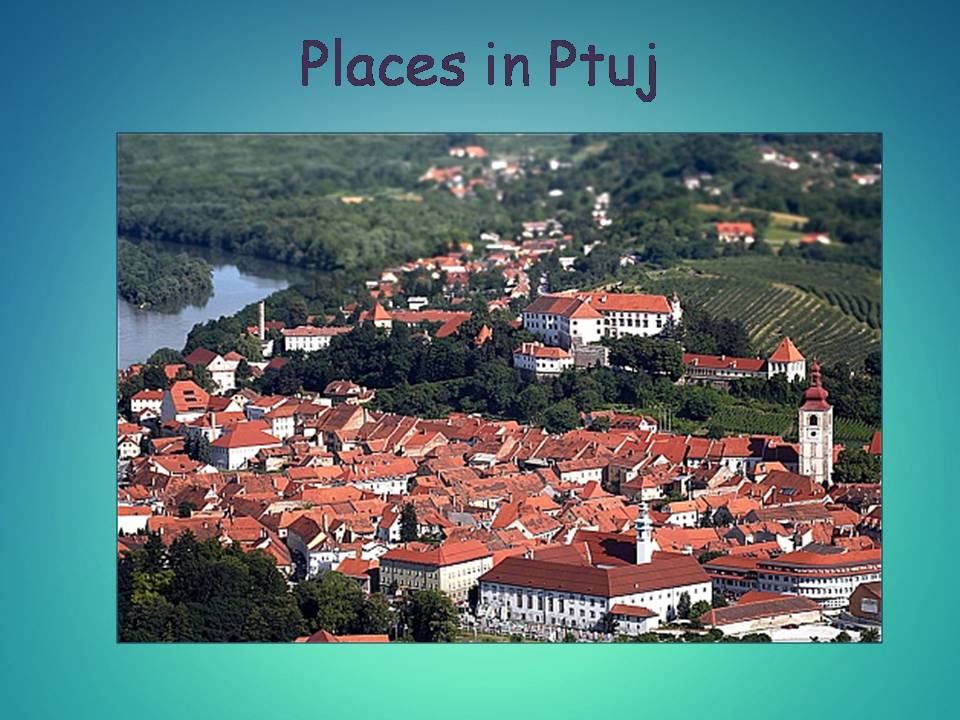 Ptuj Castle
The Romans built a fortress temples. In the Middle Ages the hill turned into a cemetery Slavs. In the castle museum exhibits numerous artifacts related to the era of feudalism in Europe, where you can also see the collection of musical instruments and weapons. 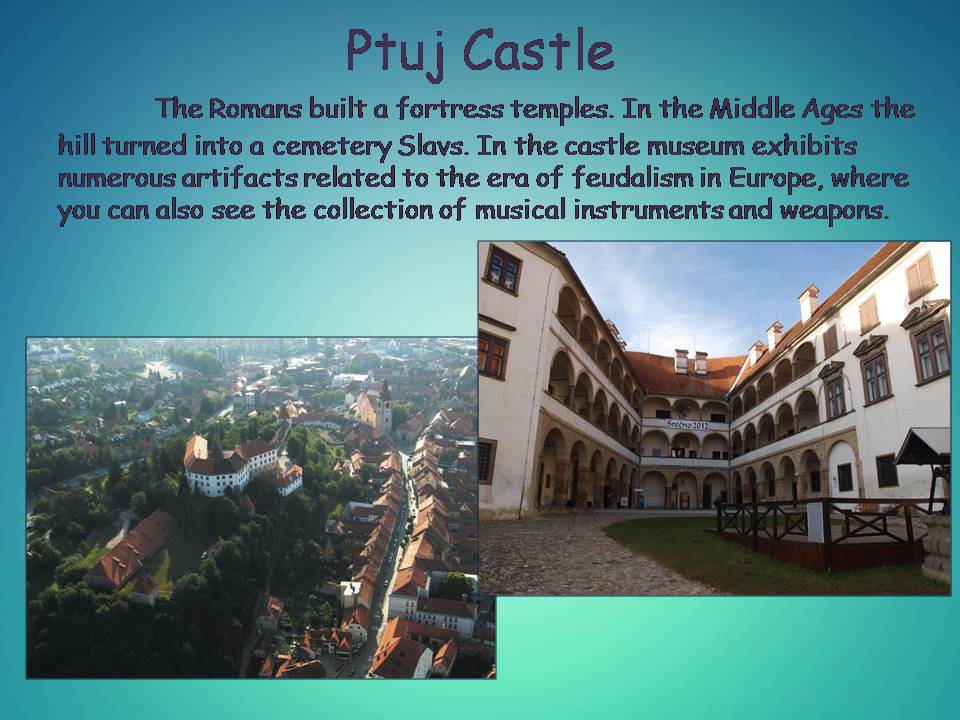 Minorite monastery
In the eastern part of the square stands a massive Minorites Minorite Monastery, which was built in the XIII century. In the center of the square is plague column with the Virgin Mary and baby Jesus. 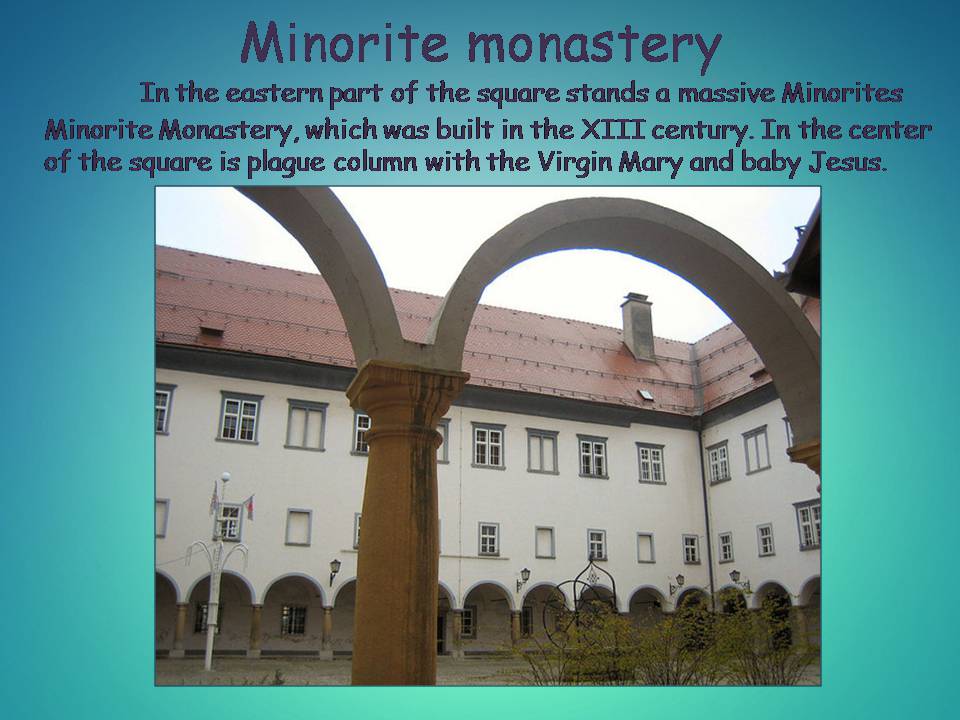 Orpheus Monument
Monument Orpheus is considered one of the most famous Roman relics Ptuj. The monument is a 5-meter marble tombstone. On the stone carved fragments from the myth of Orpheus. 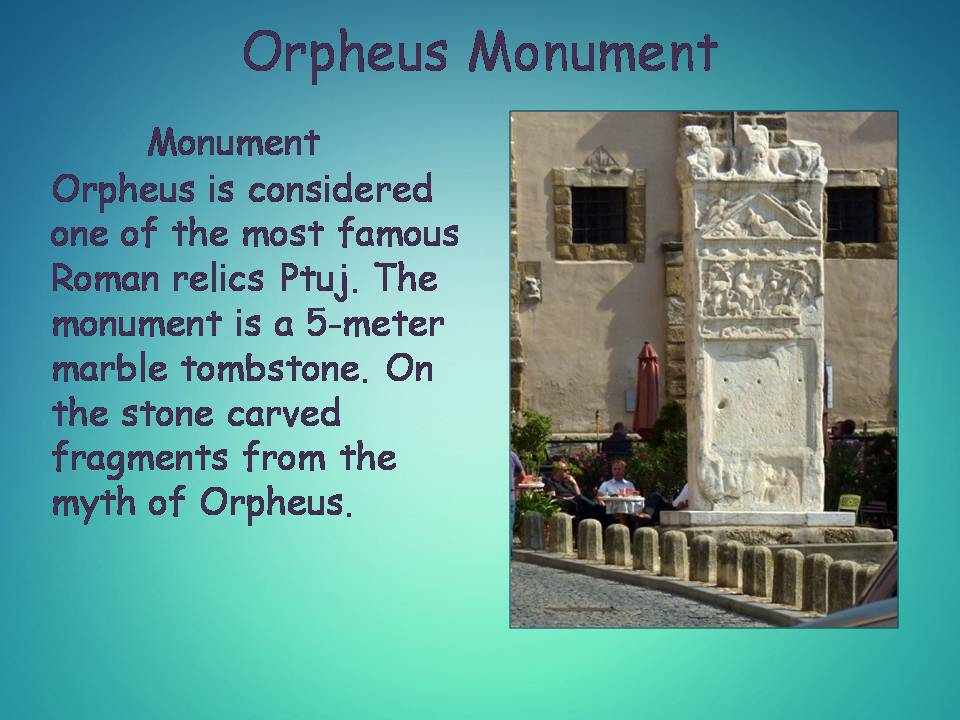