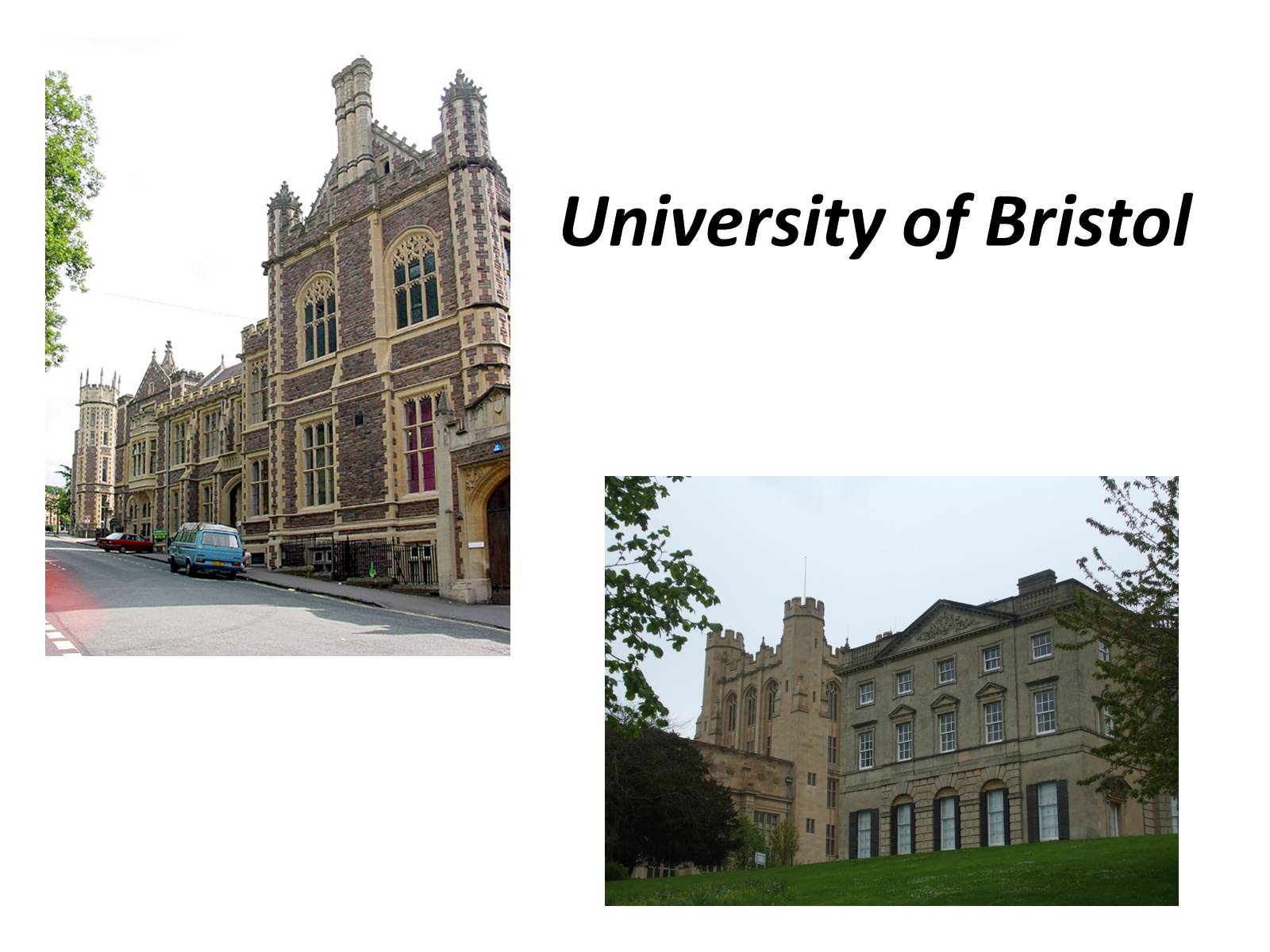 The University of Bristol (informally Bristol) is a public research university located in Bristol, United Kingdom. One of the so-called "red brick" universities, it received its Royal Charter in 1909, although its predecessor institution, University College, Bristol, had been in existence since 1876.
The University is widely regarded as one of the best in the United Kingdom and enjoys a strong global reputation, consistently being ranked as one of the top 10 in Europe. It is the most popular university in the UK. 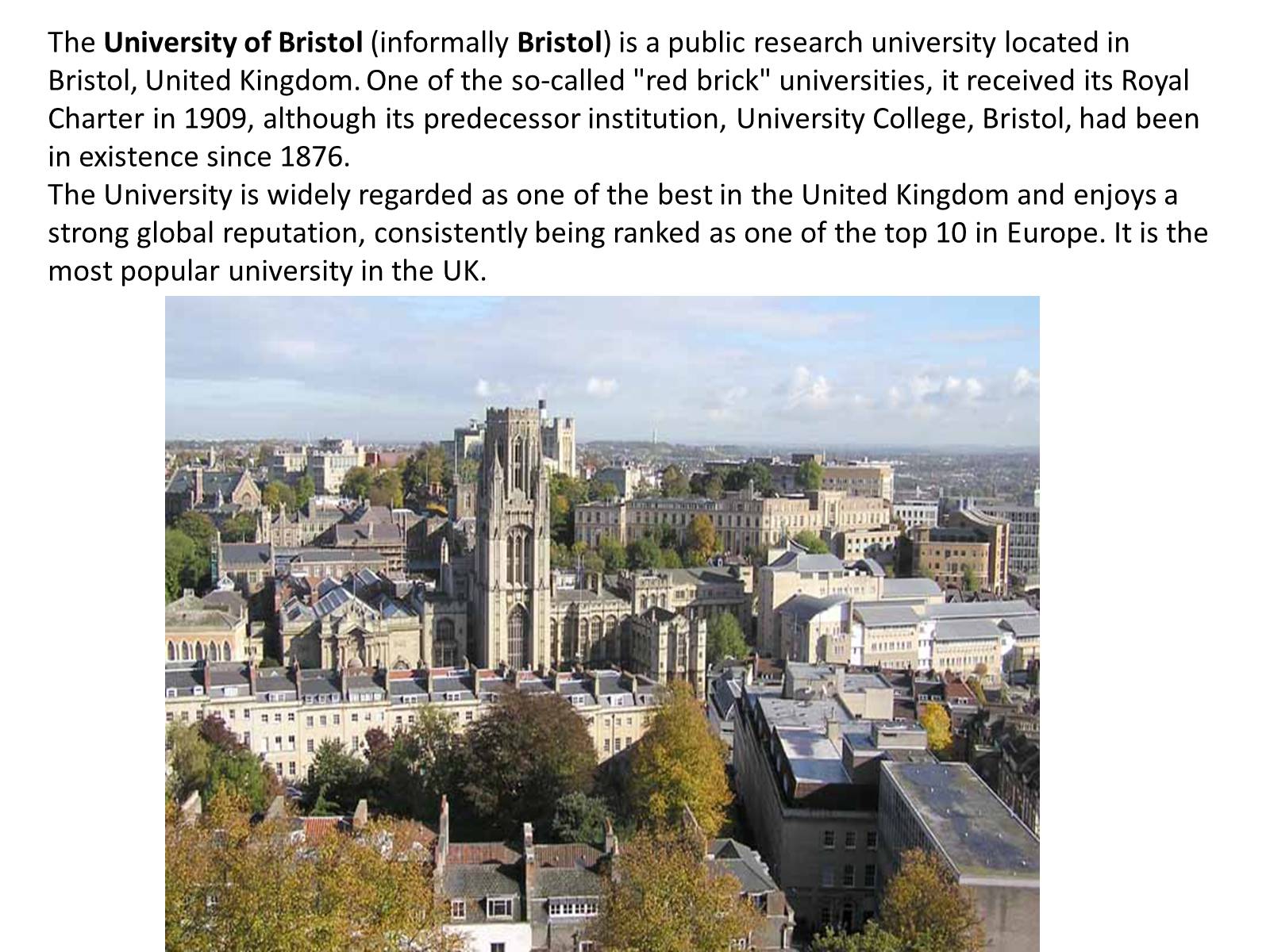 Students' Union and student life
The University has a Students' Union, the University of Bristol Union, which claims to have the largest Students' Union building in the country. From this location, the student radio station BURST (Bristol University Radio Station) broadcasts and the student paper Epigram has its office. In terms of student life, the Union is responsible for the organization of the annual freshers' fair, the coordination of Bristol Student Community Action, which organizes volunteering projects in the local community, and the organization of entertainment events and student societies. There is a separate union for postgraduate students, as well as an athletic union, which is a member of the British Universities & Colleges Sport. In distinction to the 'blues' awarded for sporting excellence at Oxford and Cambridge, Bristol's outstanding athletes are awarded 'reds'. 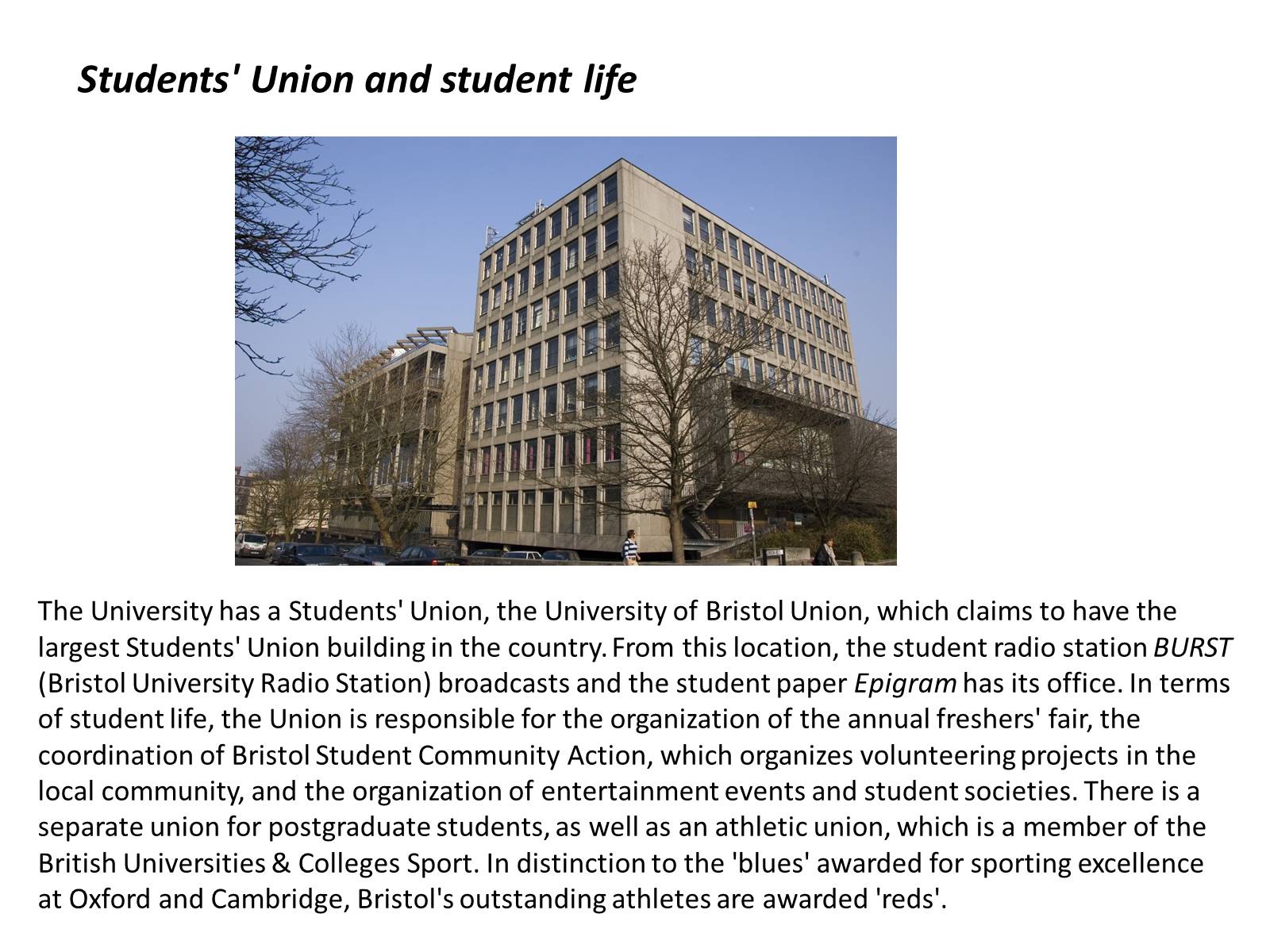 Symbols
In common with other universities in the United Kingdom, Bristol uses its particular pattern of academic dress as well its logo and coat of arms to represent itself.
The University specifies a mix of Cambridge and Oxford academic dress. For the most part, it uses Cambridge-style hoods and Oxford-style gowns. Unusually for British universities, the hoods are required to be 'University red' (see the logo at the top of the page) rather than black. 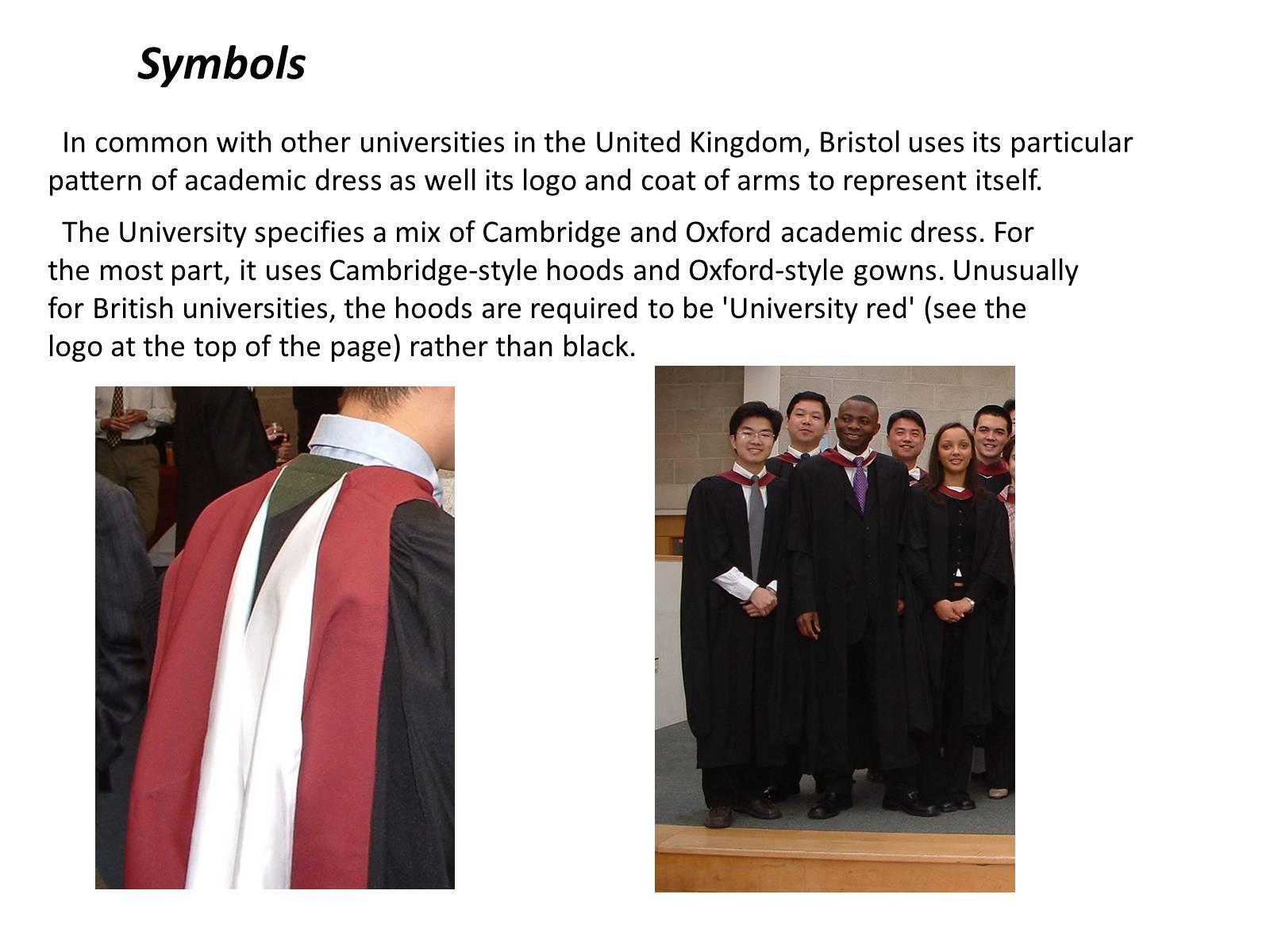 In 2004, the University unveiled its new logo. The icons in the logo are the sun for the Wills family, the dolphin for Colston, the horse for Fry and the ship-and-castle from the mediaeval seal of the City of Bristol, as also used in the coat of arms. The shape of the whole logo represents the open book of learning. This logo has replaced the University arms shown, but the arms continue to be used where there is a specific historical or ceremonial requirement. 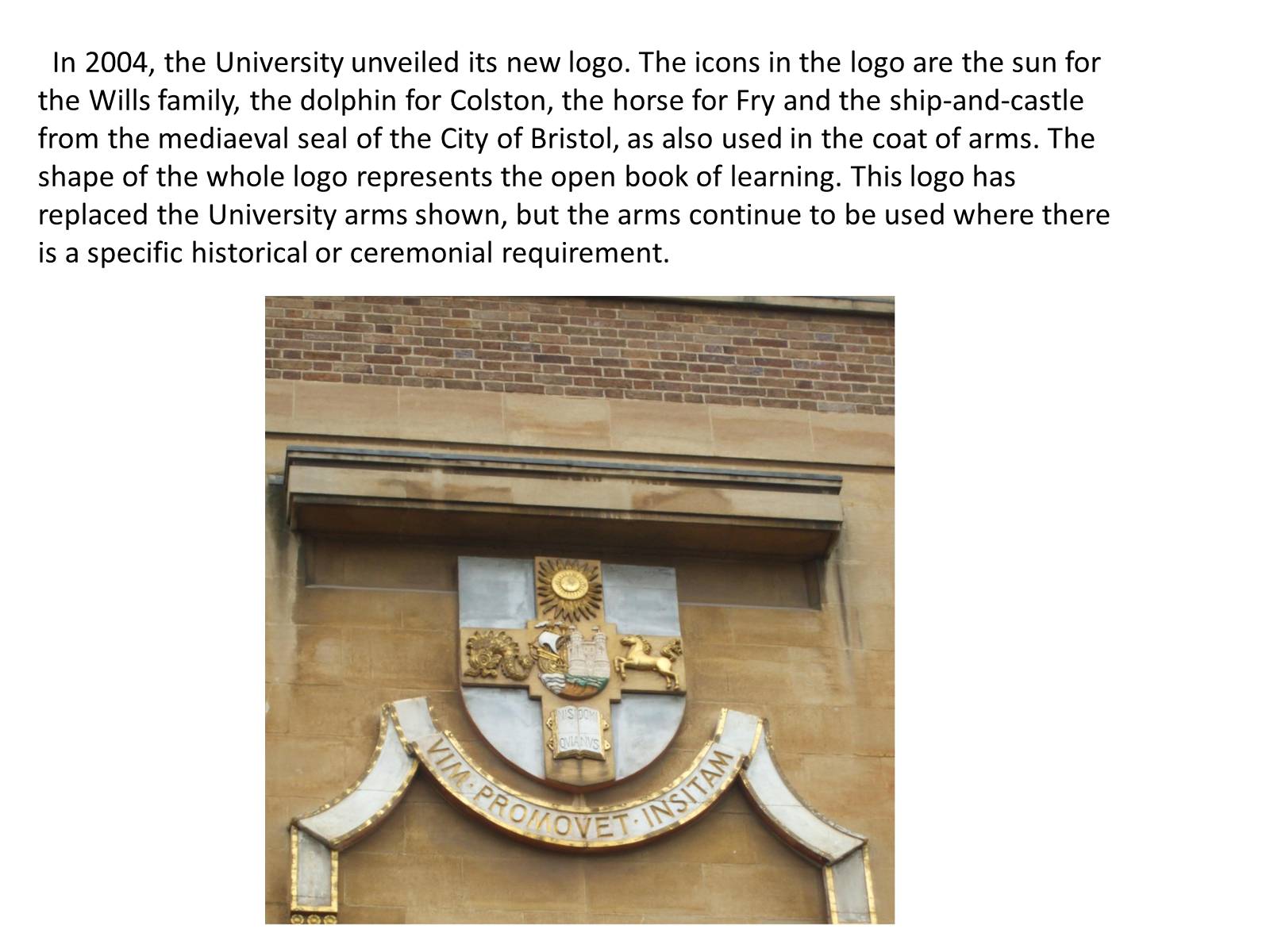 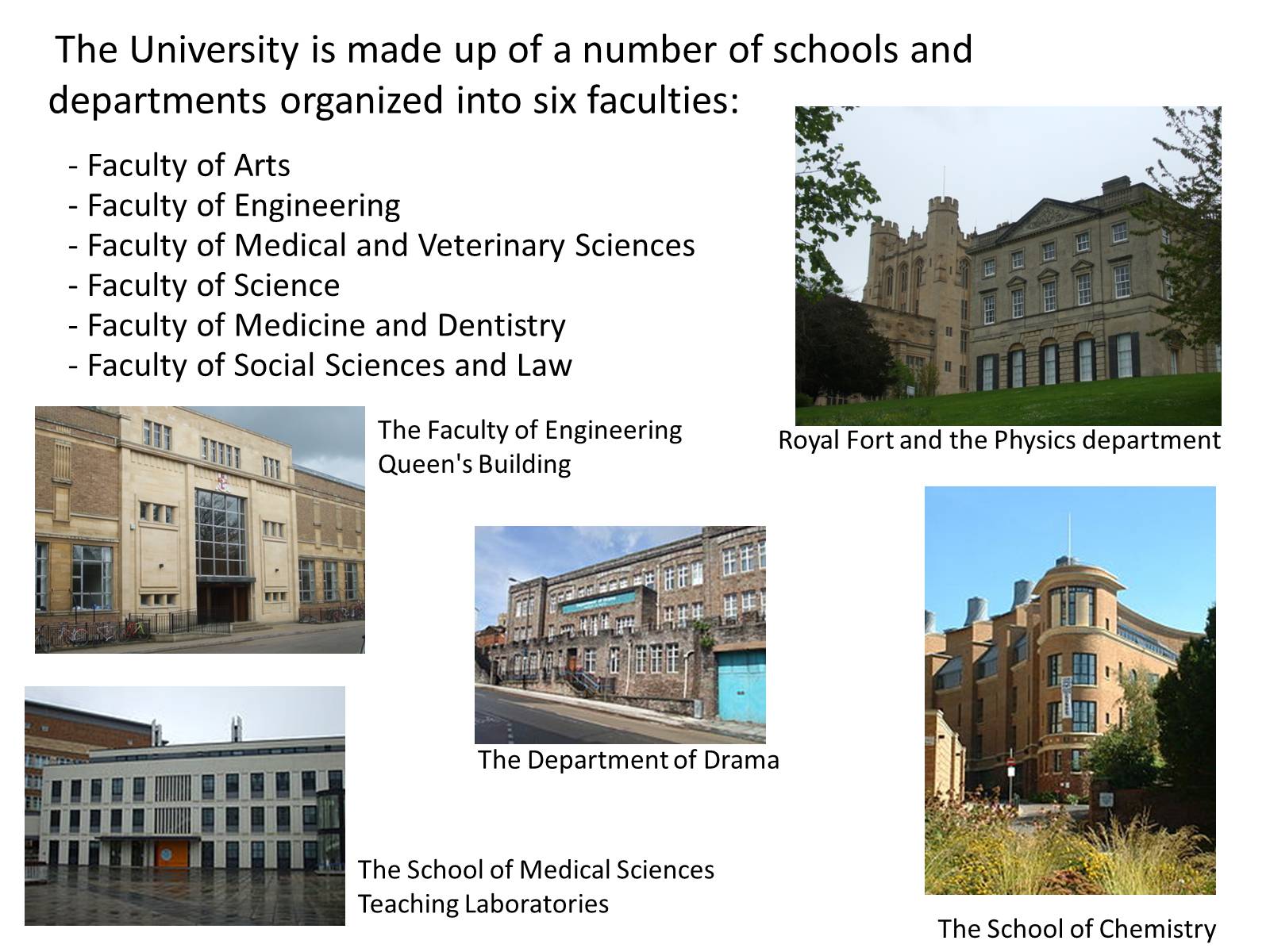 Bristol is associated with 11 Nobel Laureates, and current academics include 18 Fellows of the Academy of Medical Sciences, 10 Fellows of the British Academy, 13 Fellows of the Royal Academy of Engineering and 31 Fellows of the Royal Society.
Bristol is a member of the Russell Group, the European-wide Coimbra Group and the Worldwide Universities Network, of which the University's Vice-Chancellor Prof. Eric Thomas was Chairman (2005–2007).
Currently, about 14% of the university students - foreigners. They represent more than 100 countries and play an important role in the life of Bristol.
Some Facts 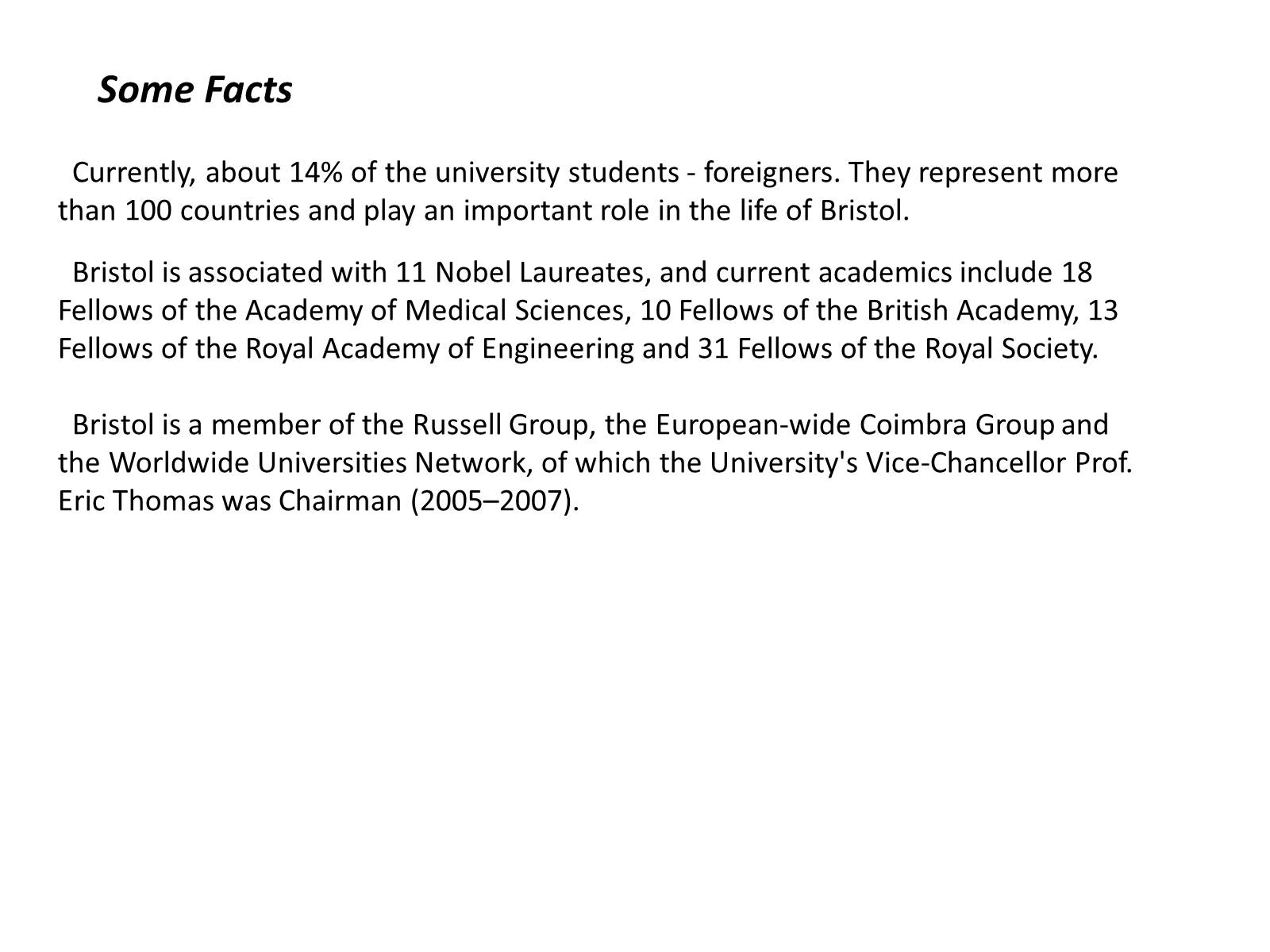