Презентація на тему «The War of the Roses»

The War of the Roses 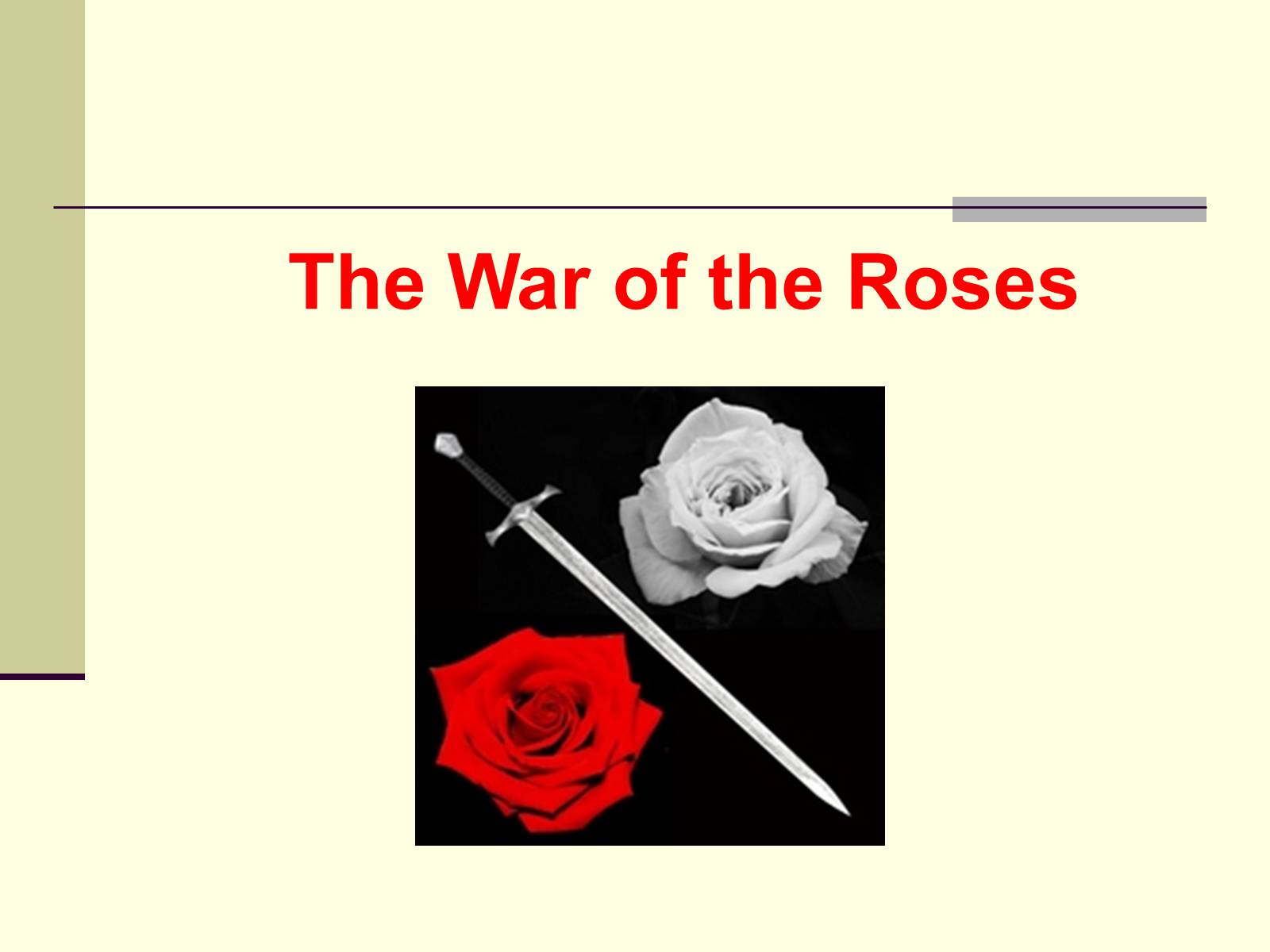 War of the Roses 1455-1485
Civil war in England, for the throne between the two branches of the Plantagenet dynasty - Lancaster (in the arms of a red rose) and York (in the arms of a white rose). The death in the war the main representatives of the two dynasties, and a large part of the nobility has facilitated the establishment of the Tudor absolutism. 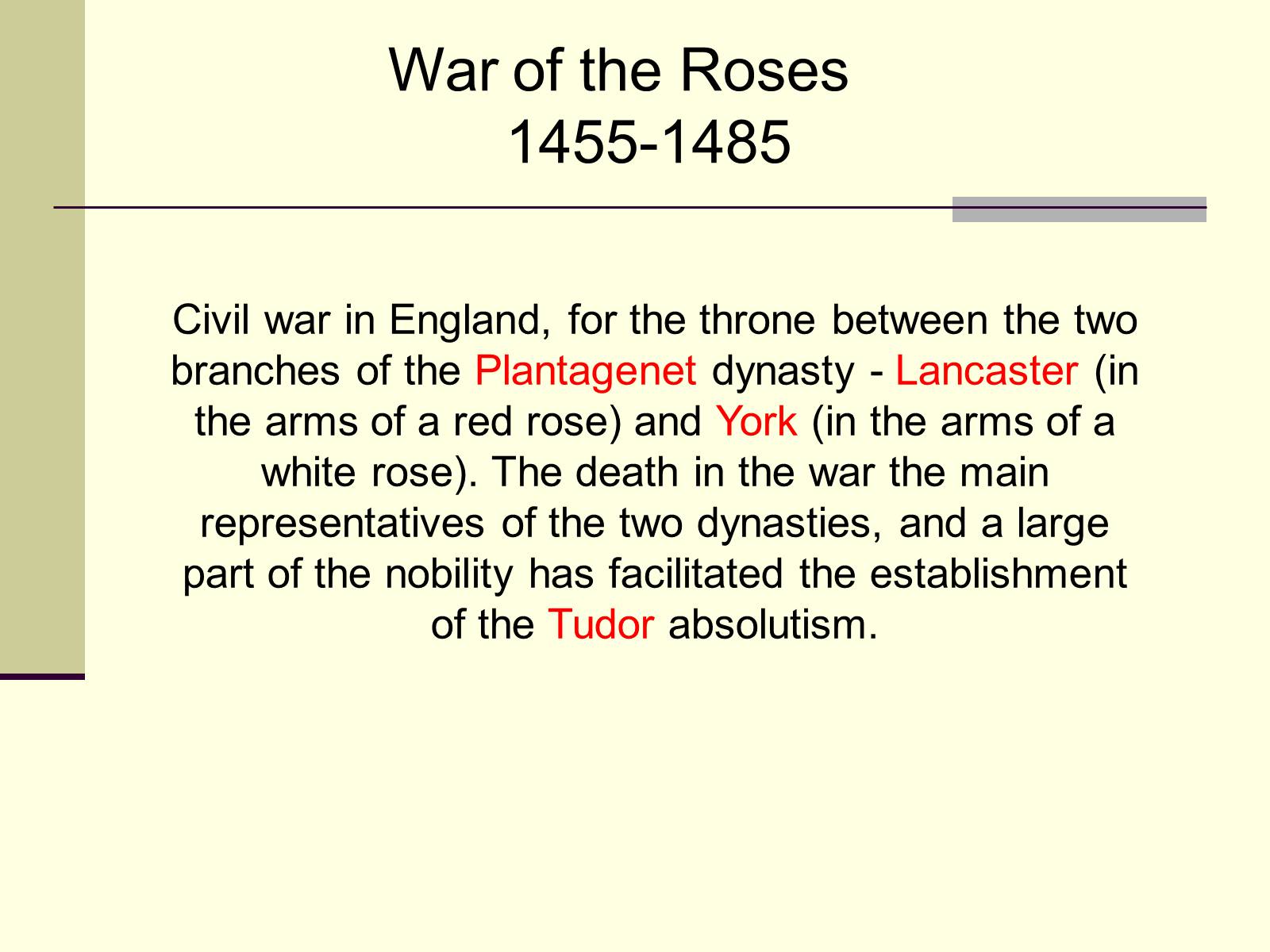 The reason for the war became a dissatisfaction a significant part of English society with the failures in the Hundred Years War and the policies pursued by the wife of King Henry VI, Queen Margaret and his minions (the king was weak-willed person, also sometimes fall into complete oblivion).
Margaret of Anjou and her son Prince Edward. Statue in the Luxembourg Gardens in Paris
Henry VI-third and the last King of England of the House of Lancaster.
Only one of the kings of England, who wore during the Hundred Years War and after it the title of "King of France", who actually was crowned (1431), and he reigned in France 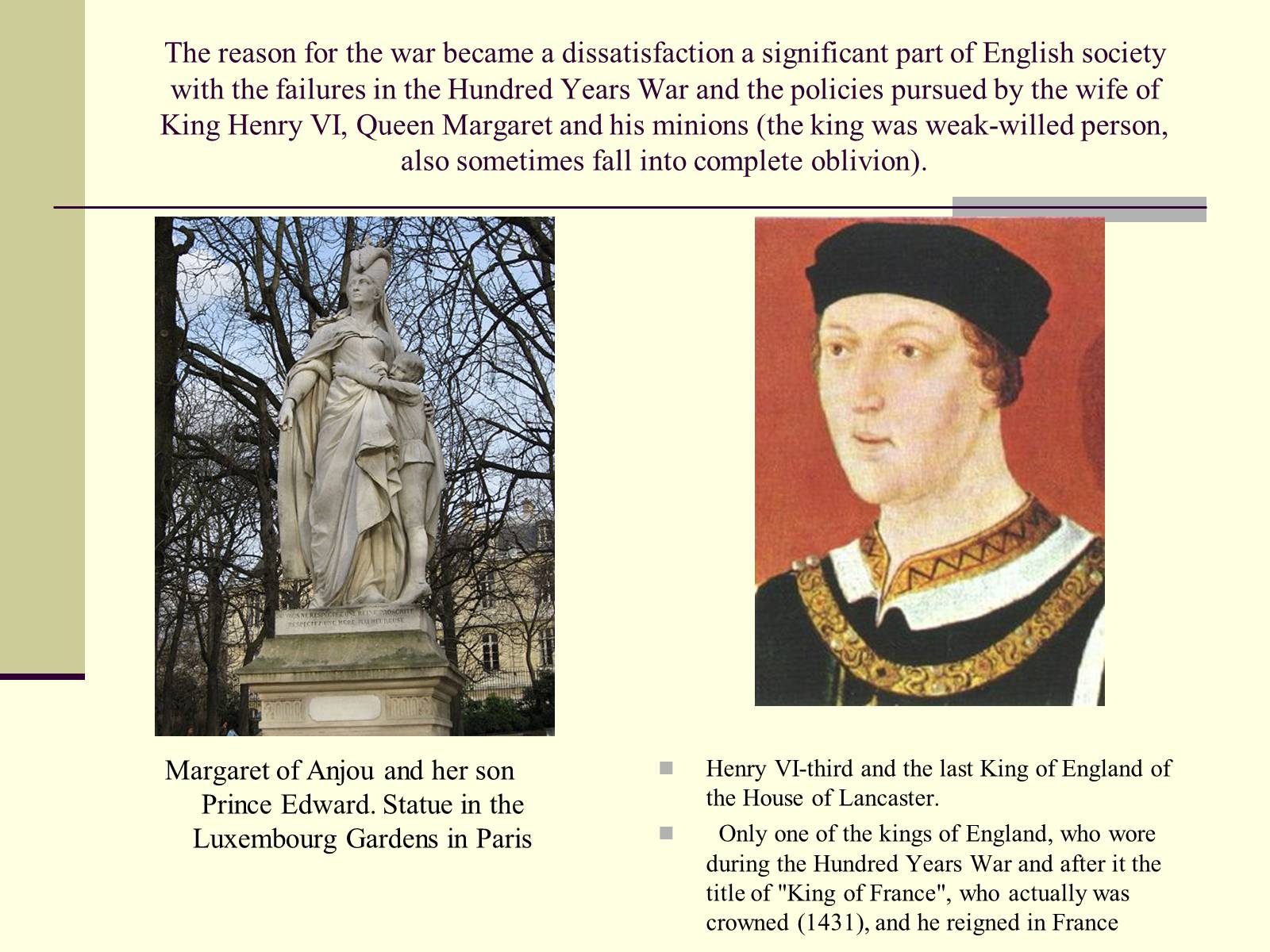 Richard II - King of England
(1377-1399), a representative of the Plantagenet dynasty, the grandson of King Edward III, son of Edward the Black Prince.
The opposition was led by Richard Duke of York, who demanded the regency over the incompetent king, and later - the English crown.
The basis for this claim was the fact that Henry VI was the great-grandson of John of Gaunt - the fourth son of King Edward III, and  York - the great-grandson of Lionel - the third son of this king (the female line, in the male line he was the grandson of Edmund - the fifth son of Edward III), also the grandfather of Henry VI, Henry IV took the throne in 1399, violently forcing King Richard II to abdicate. 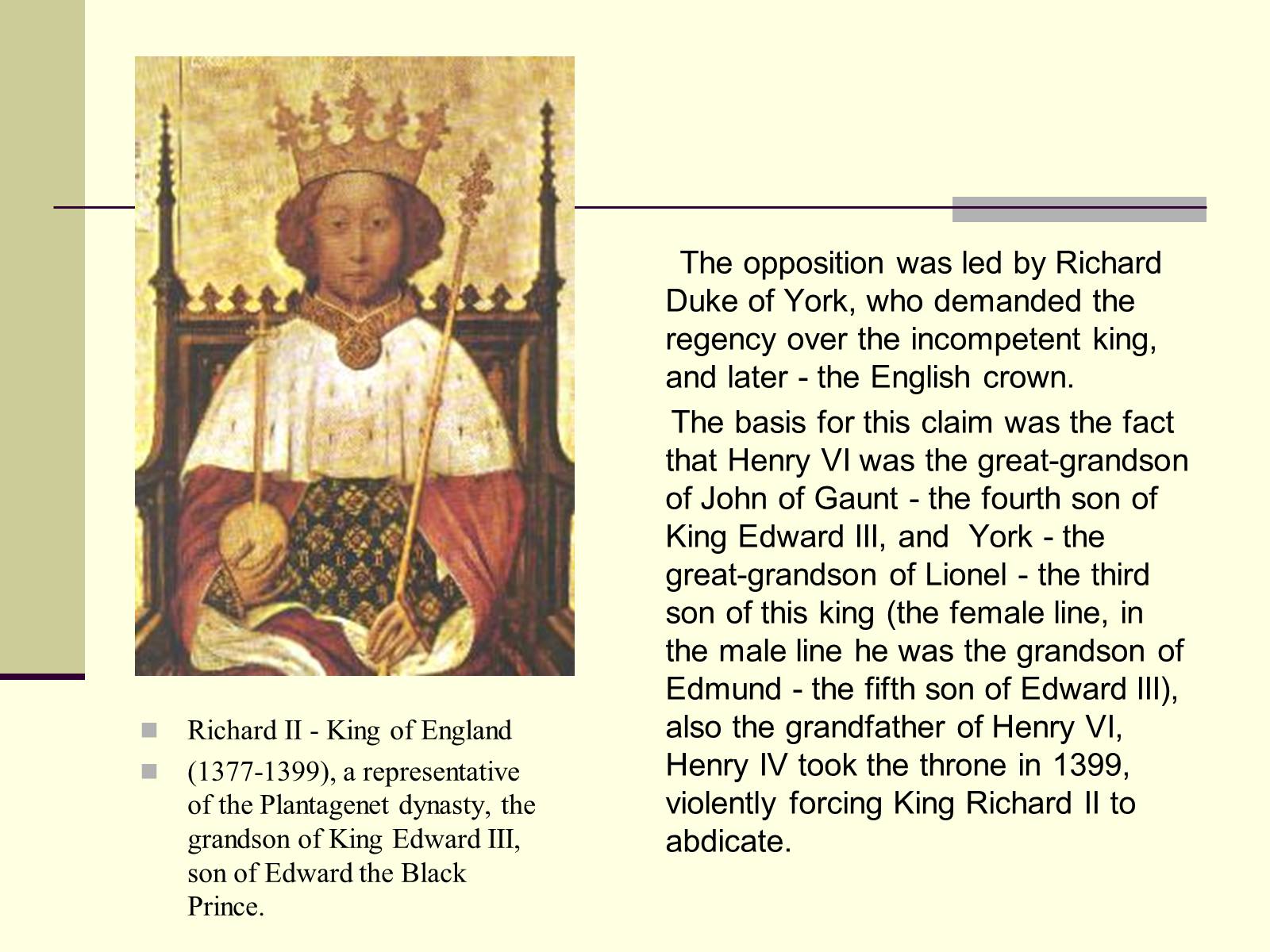 The confrontation turned into a war in 1455, when at the First Battle at Sent Albans celebrated the victory Yorkists, shortly after which the English Parliament declared Richard of York protector of the kingdom and heir of Henry VI. 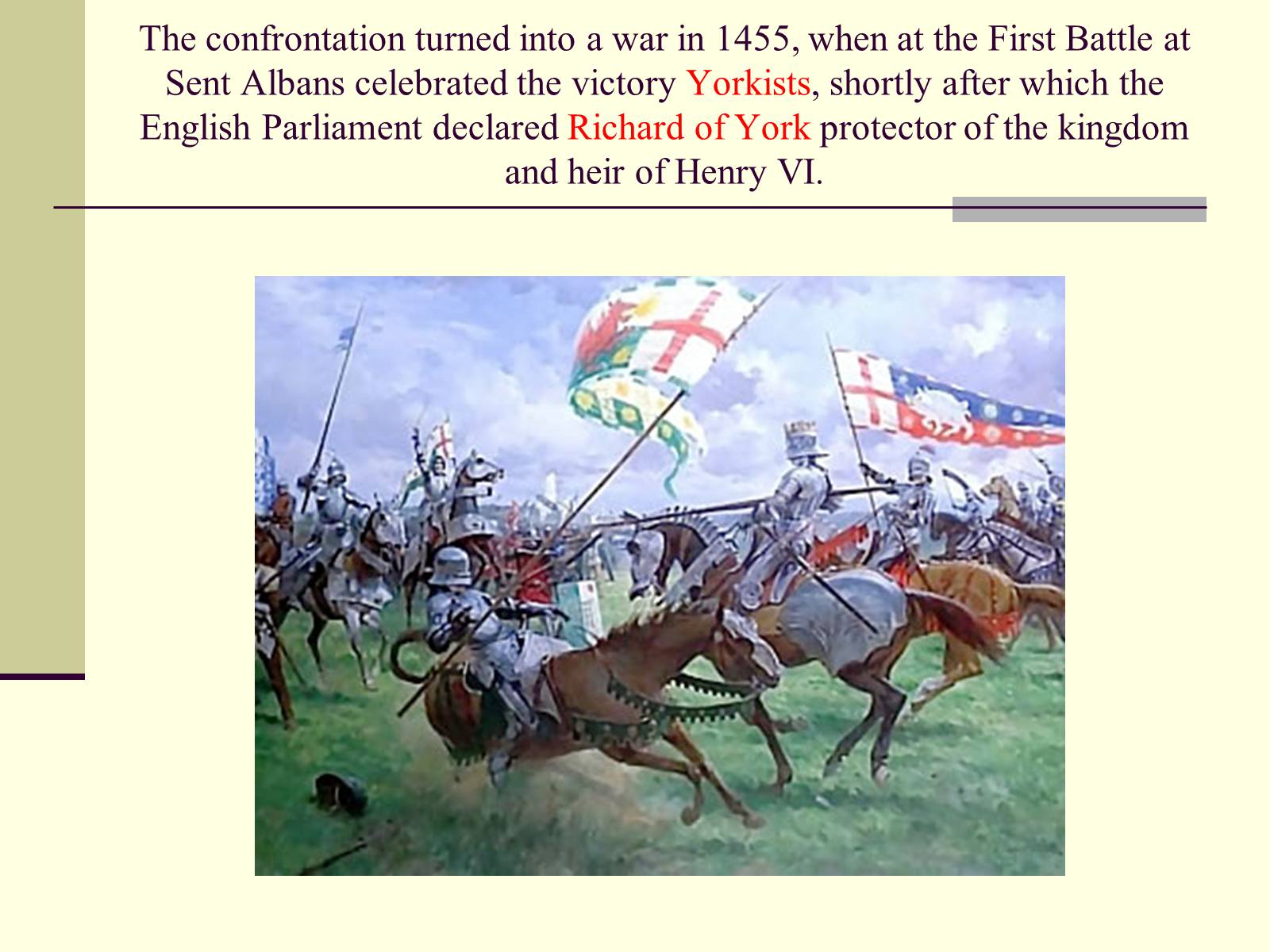 In 1460, at the Battle at Wakefield, Richard of York was killed. The White Roses was headed by his son, Edward, in 1461 crowned in London as Edward IV.
In the same year, the Yorkists were won victory at Mortimer's Cross and at Taunton. As a result, the main Lancastrian forces were defeated, and King Henry VI and Queen Margaret fled the country (the king was soon caught and imprisoned in the Tower). 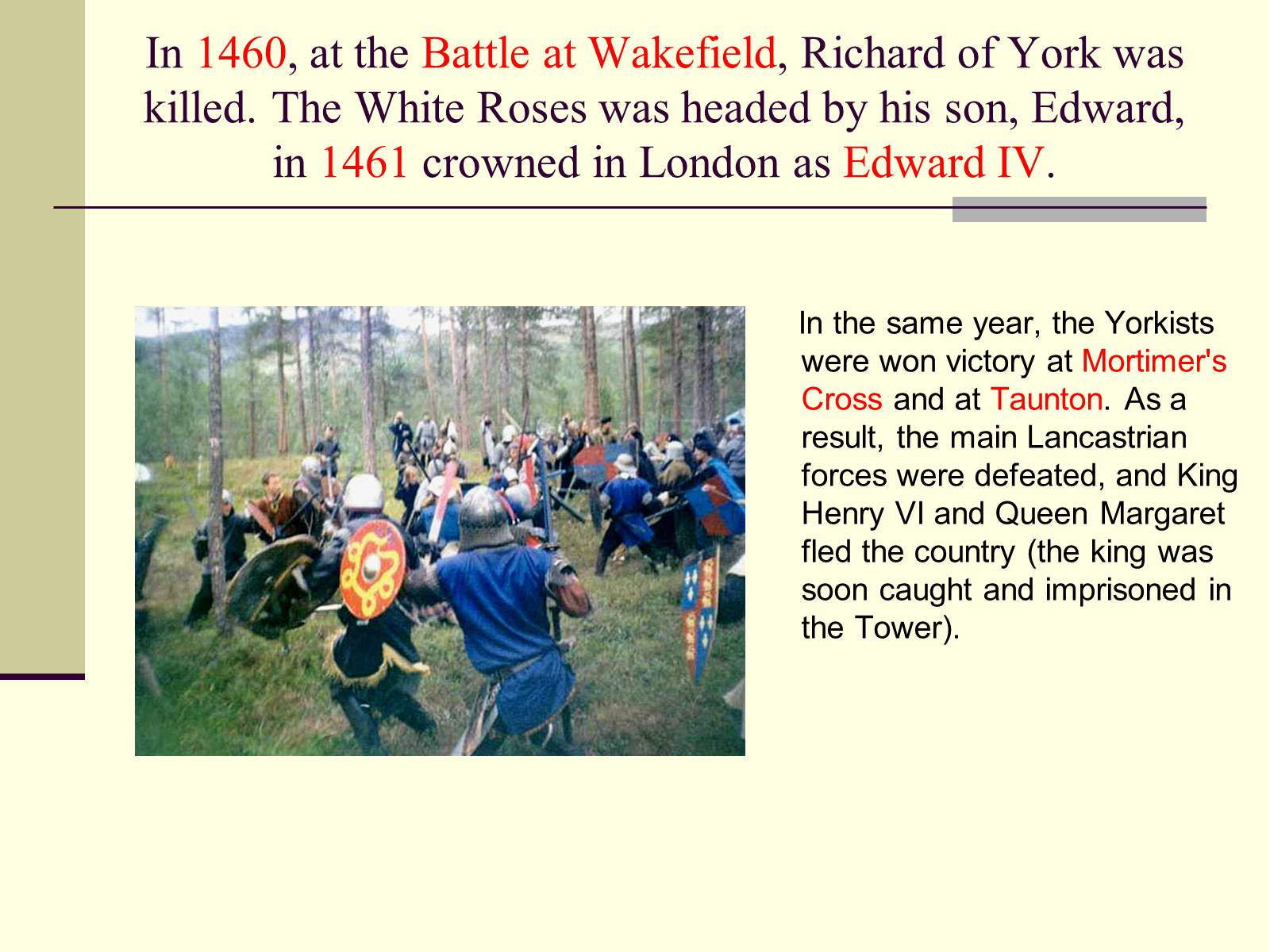 Edward and his brother the Duke of York in the Tower. Picture of Paul Delaroche, XIX century.
. The fighting resumed in 1470, when sided with the Lancastrian the Earl of Warwick and the Duke of Clarence(the younger brother of Edward IV) and was returned to the throne Henry VI. Edward IV with his other brother, the Duke of Gloucester fled to Burgundy, from where he returned in 1471. The Duke of Clarence moved again to the side of his brother - and Yorkists won a victory at Barnet and Tyuksberri. In the first of these battles was killed Earl of Warwick, in the second was killed Prince Edward - the only son of Henry VI, - that, along with followed in the same year in the Tower death (probably murder) of the Henry was the end of the Lancastrian dynasty. 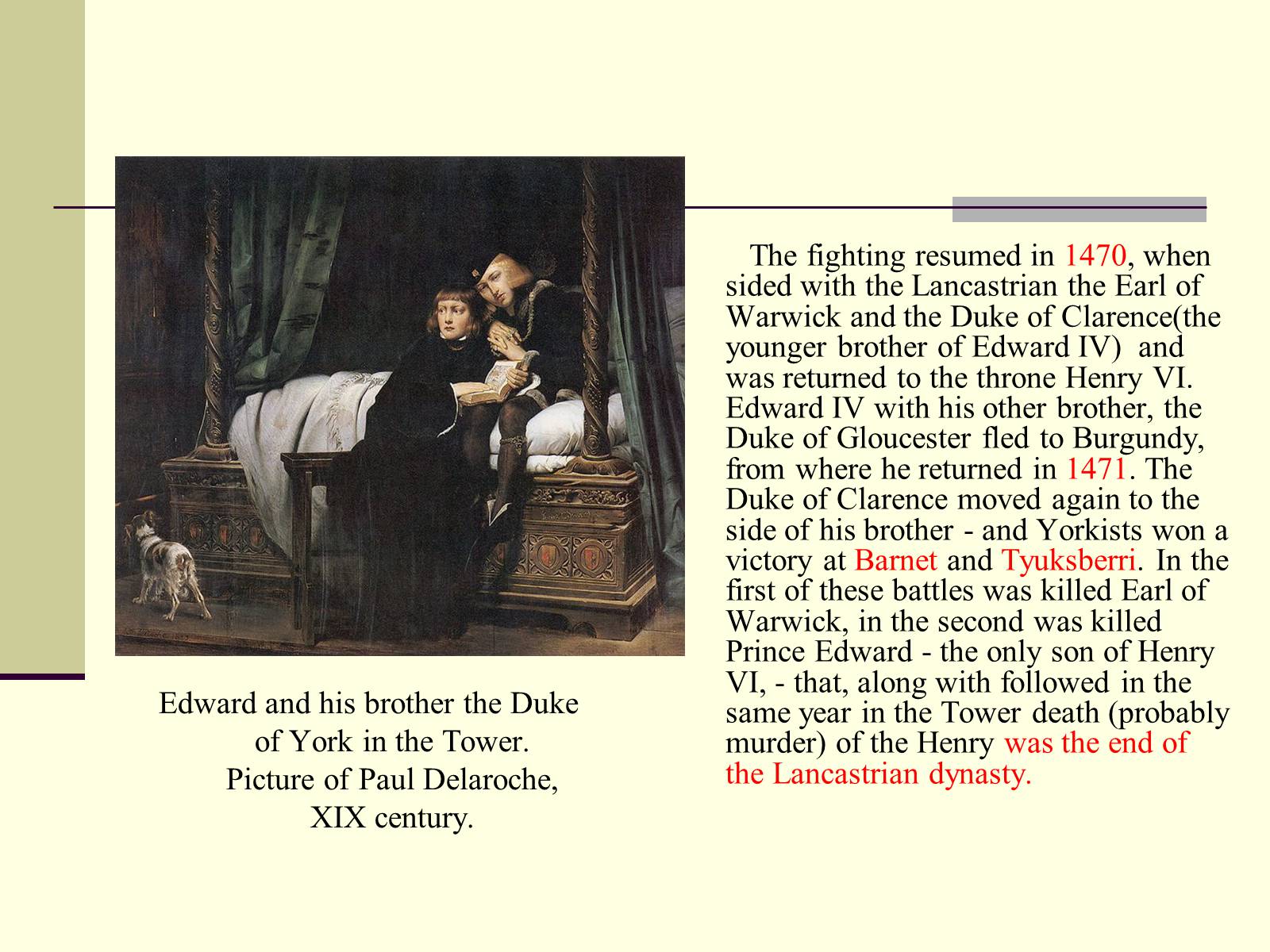 Edward IV - the first king of the York dynasty - reigned in peace until his death, which followed all of a sudden in 1483, when for a short time became the king his son, Edward V.
Edward IV-King of England in 1461-1470 and 1471-1483, a representative of York's Plantagenet line, seized the throne during the Wars of the Roses.
Edward V-King of England from 9 April to 25 June 1483, the son of Edward IV; was not crowned 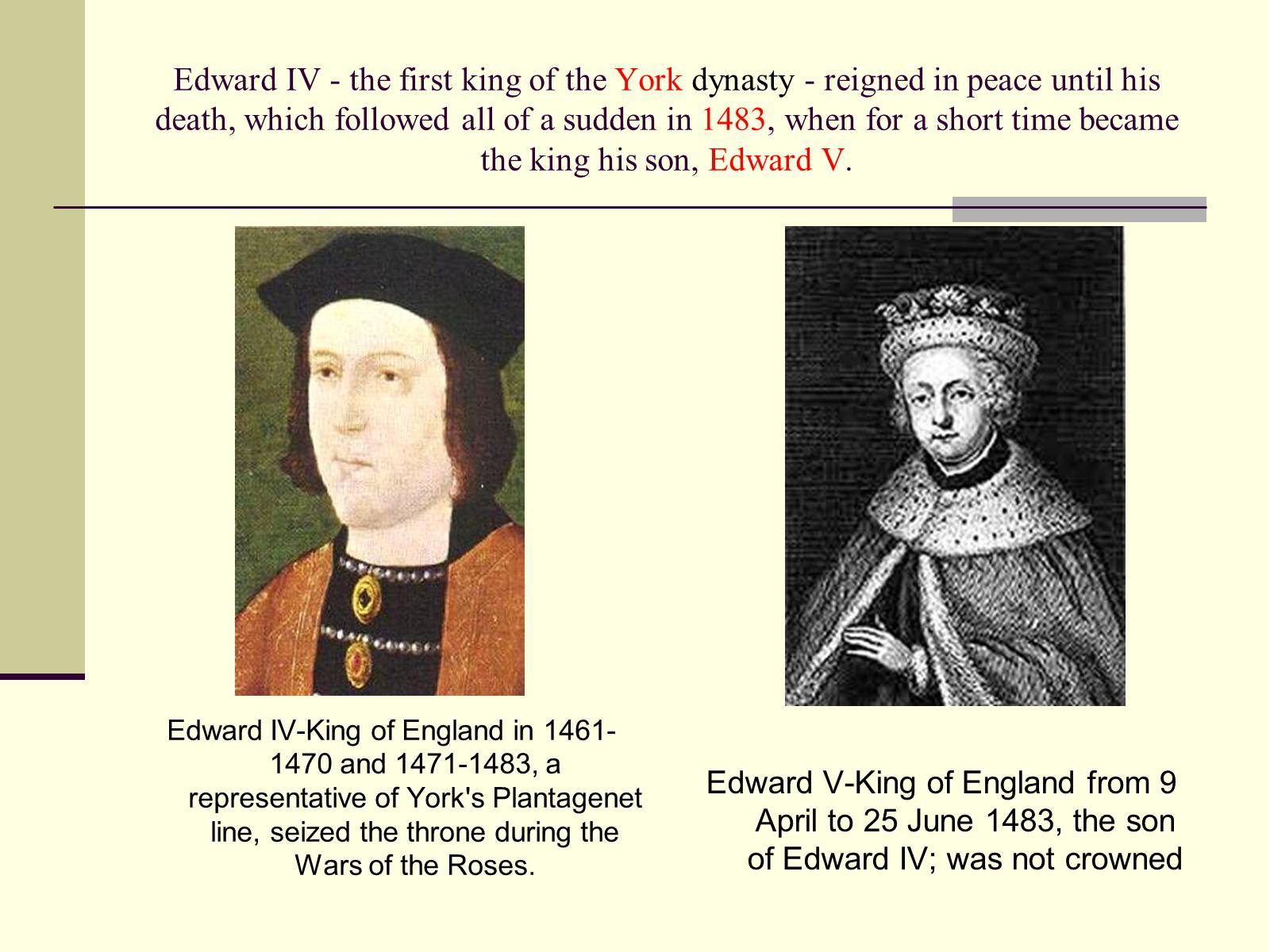 Royal Council announced his illegitimate and brother of the Edward IV Richard of Gloucester was crowned in the same year as Richard III. His short reign was dramatic and full of struggle with the opposition. In this struggle, the king initially contributed to success, but the number of opponents only increased .
Richard III-King of England c 1483 of the House of York, the last of the male line of the Plantagenets on the English throne. 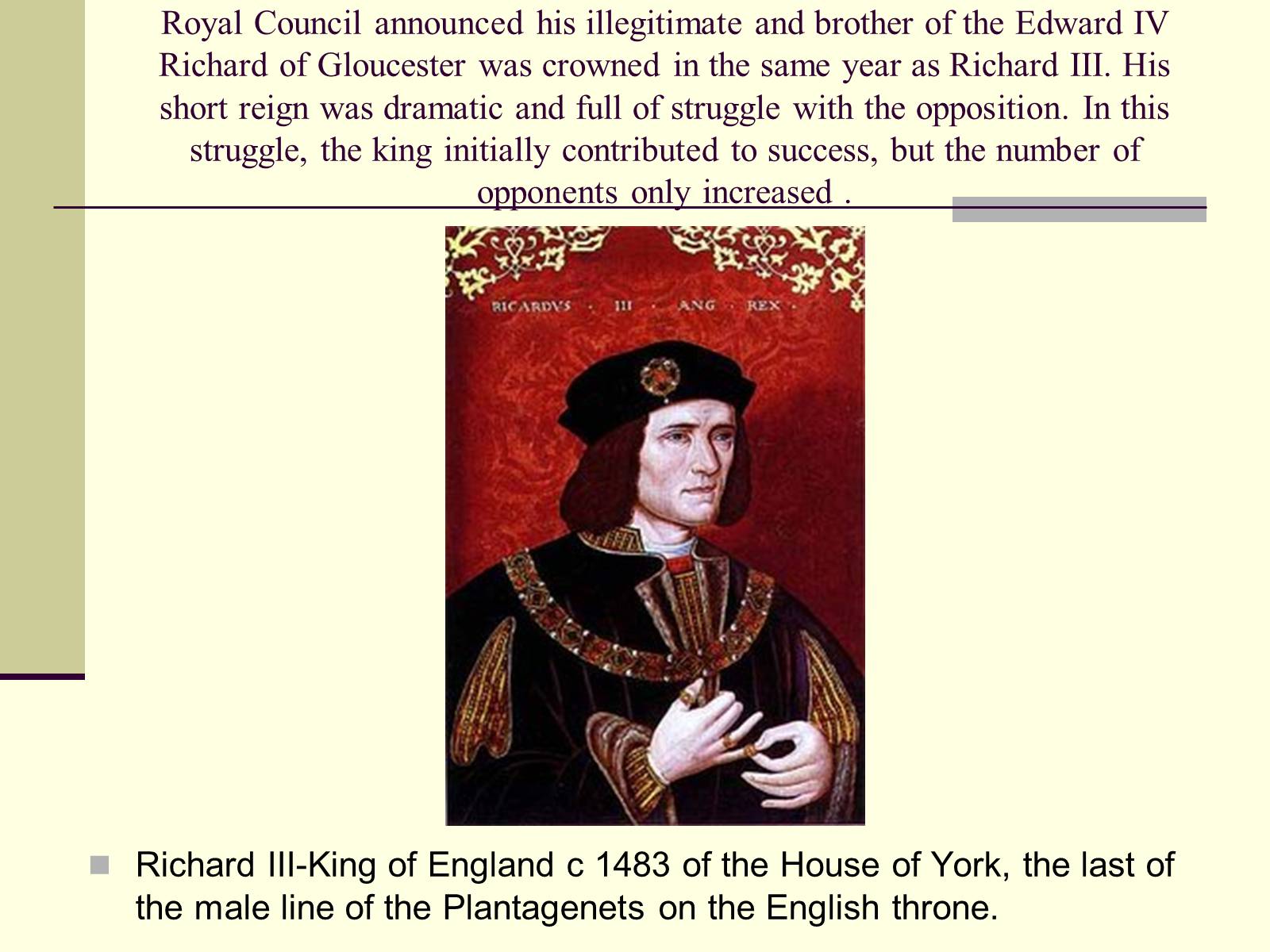 Henry VII-King of England and Ireland (1485-1509), the first of the Tudor dynasty.
In 1485, forces by the Lancastrian led by Henry Tudor landed in Wales. In the battle of Bosworth Richard III was killed, and the crown passed to Henry Tudor who became King Henry VII, - the founder of the Tudor dynasty. In 1487 Earl of Lincoln (nephew of Richard III) was trying to regain the crown of York, but at the Battle of Stoke Field was killed. 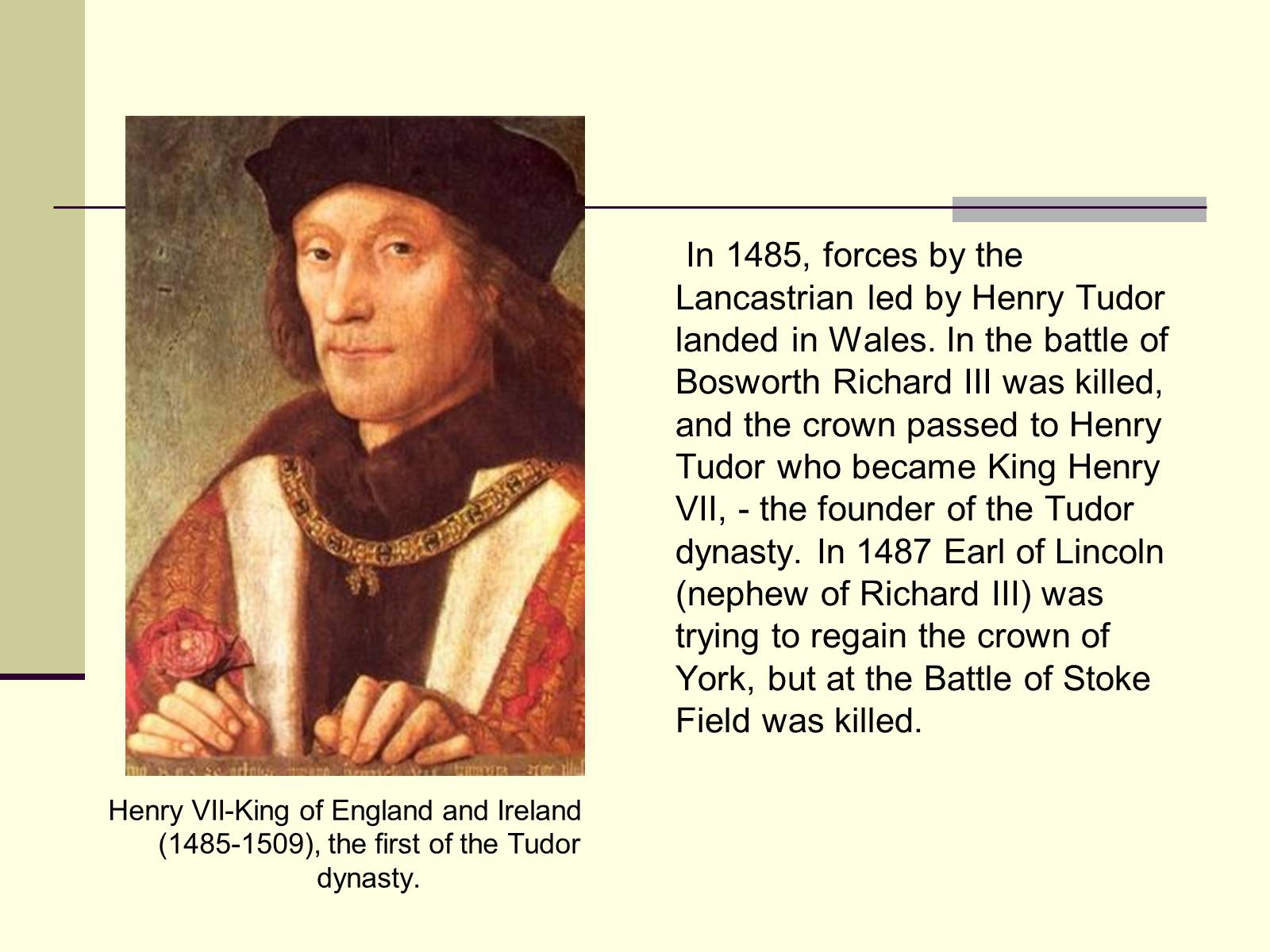 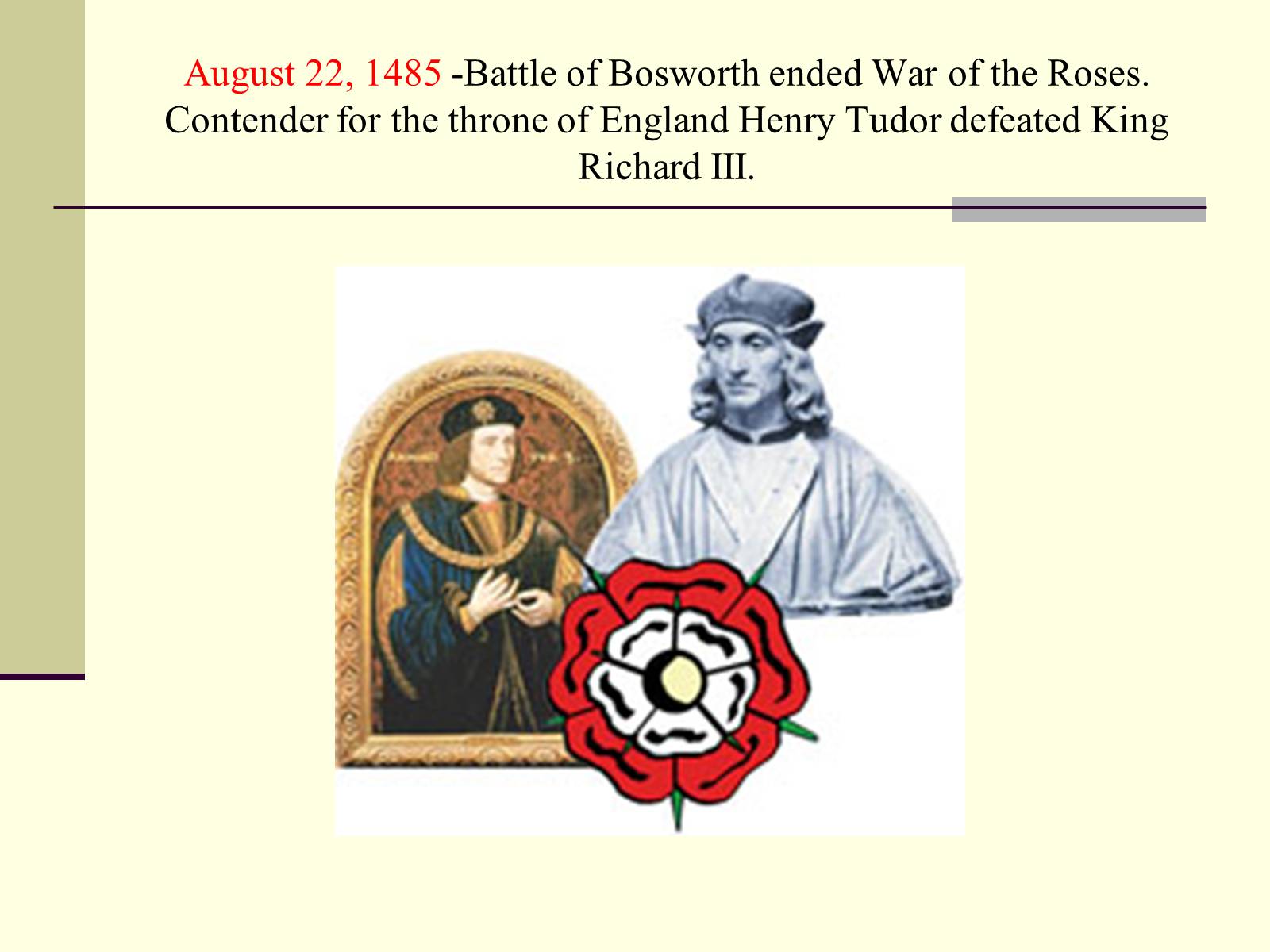 The results of the war
The Wars of the Roses actually drew a line under the English Middle Ages. On the battlefields, in prisons died not only all direct descendants of the Plantagenets, but much of the English lords and knights. Accession of the Tudors in 1485 is the beginning of a new time in English history. 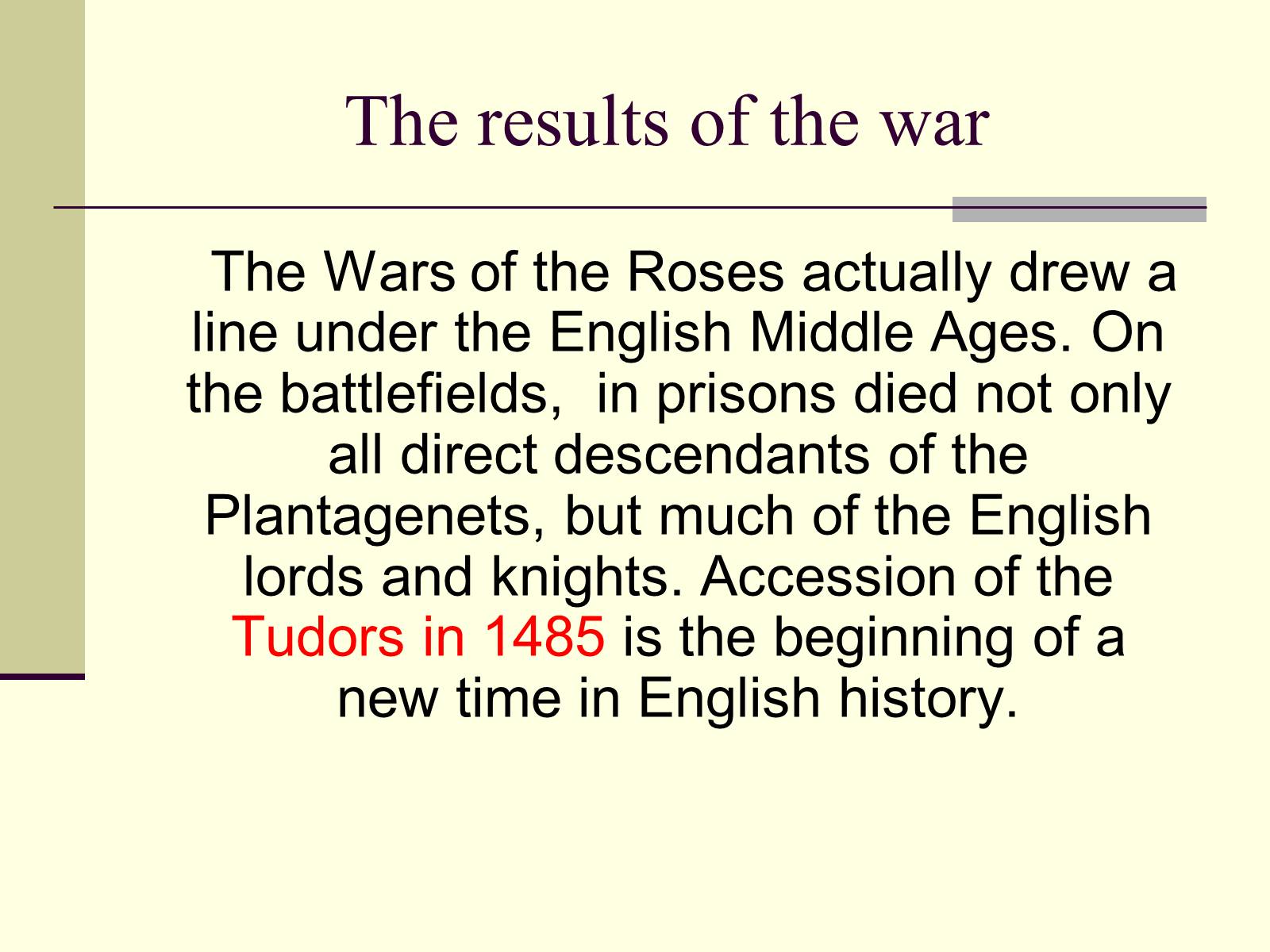