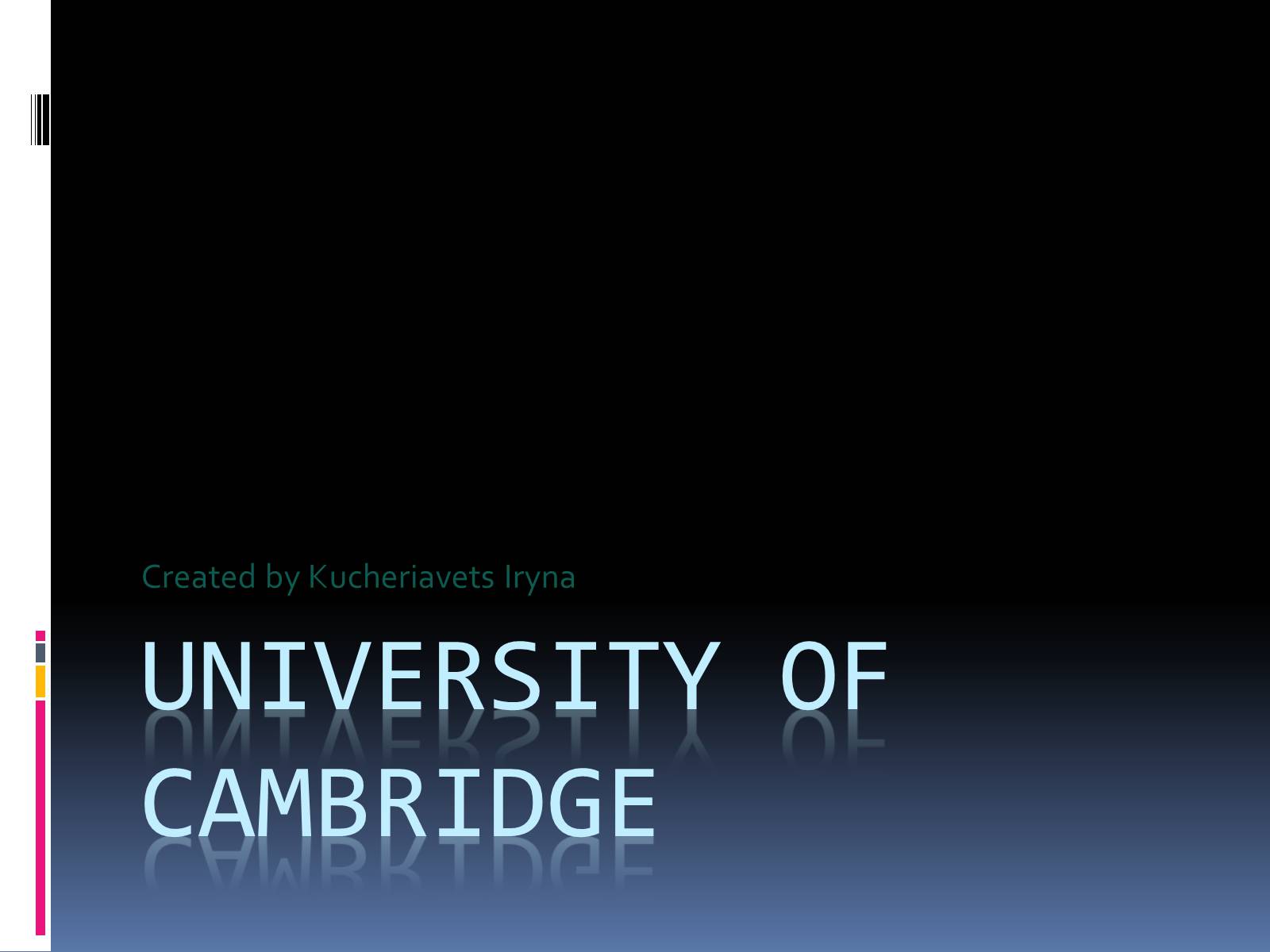 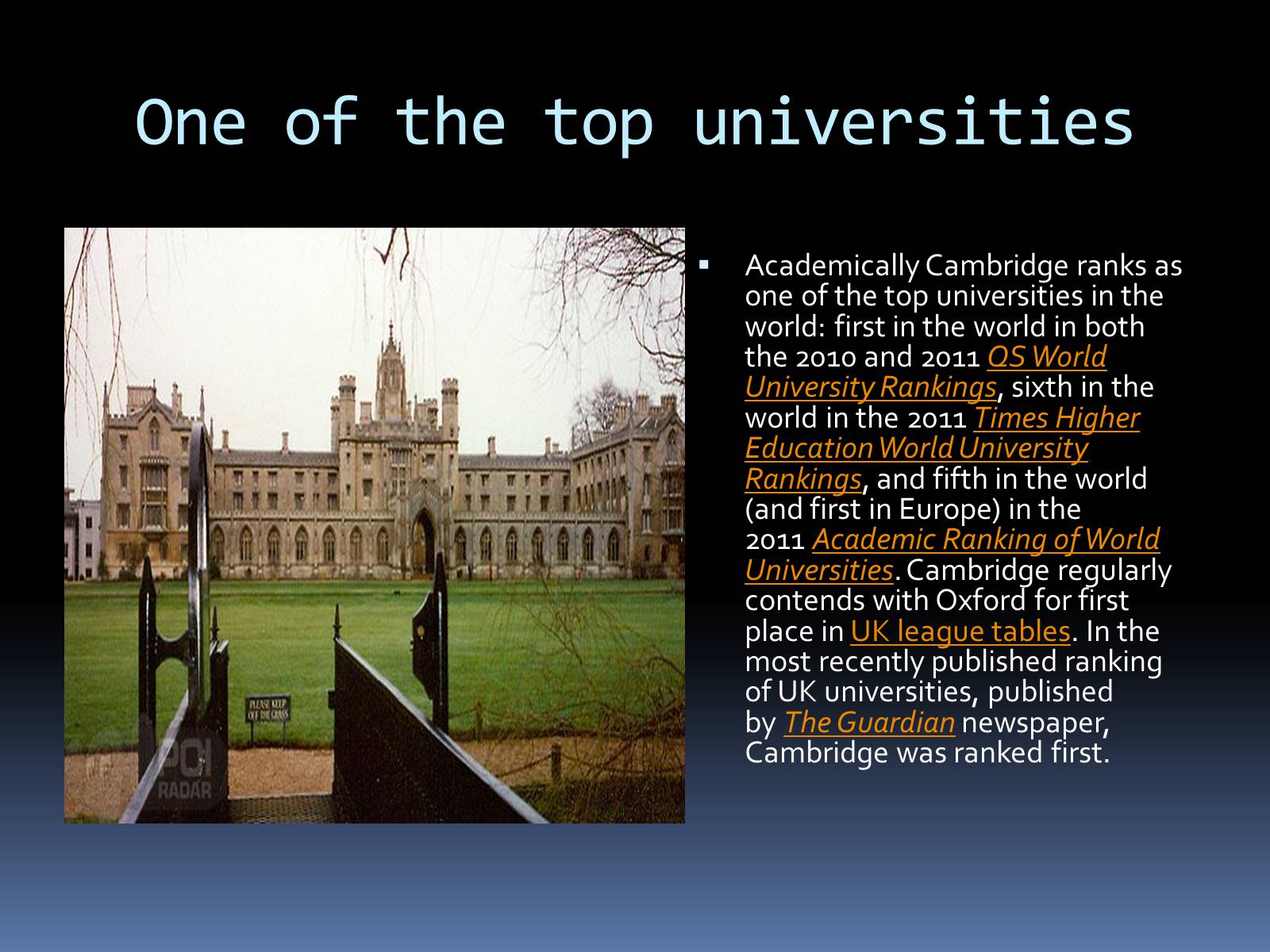 The History of the University
Cambridge's colleges were originally an incidental feature of the system. No college is as old as the university itself. The colleges were endowed fellowships of scholars. There were also institutions without endowments, called hostels. The hostels were gradually absorbed by the colleges over the centuries, but they have left some indicators of their time, such as the name of Garret Hostel Lane. Mathematics
From the time of Isaac Newton in the later 17th century until the mid-19th century, the university maintained a strong emphasis on applied mathematics, particularly mathematical physics. Study of this subject was compulsory for graduation, and students were required to take an exam for the Bachelor of Arts degree, the main first degree at Cambridge in both arts and science subjects. This exam is known as a Tripos. 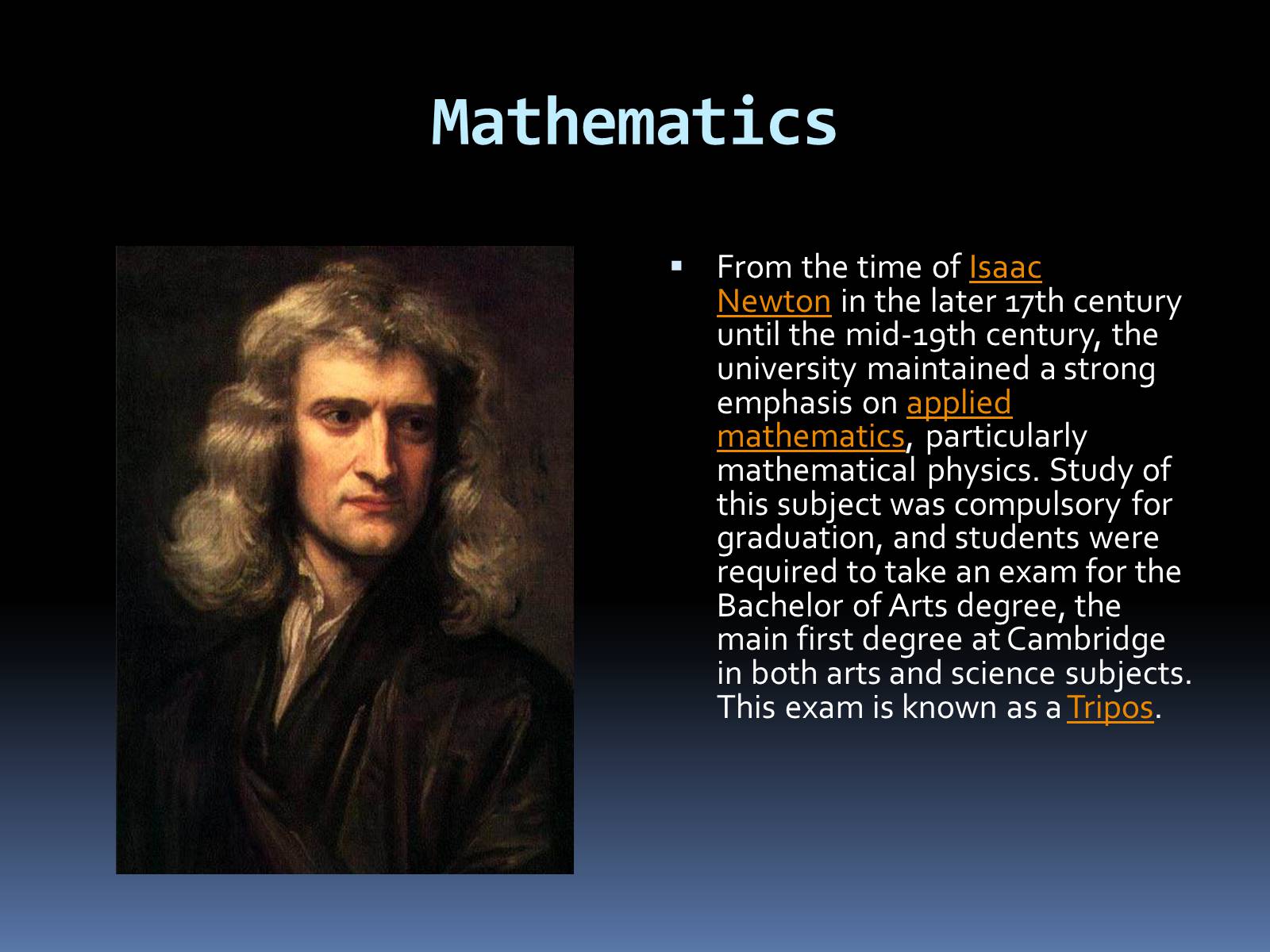 Famous graduates
Graduates of the University have won a total of 61 Nobel Prizes, the most of any university in the world. Among them Isaac Newton, Oliver Cromwell, Francis Bacon, George Byron, Alfred Tennyson, Charles Darwin, John Maynard Keynes, Stephen Hawking. 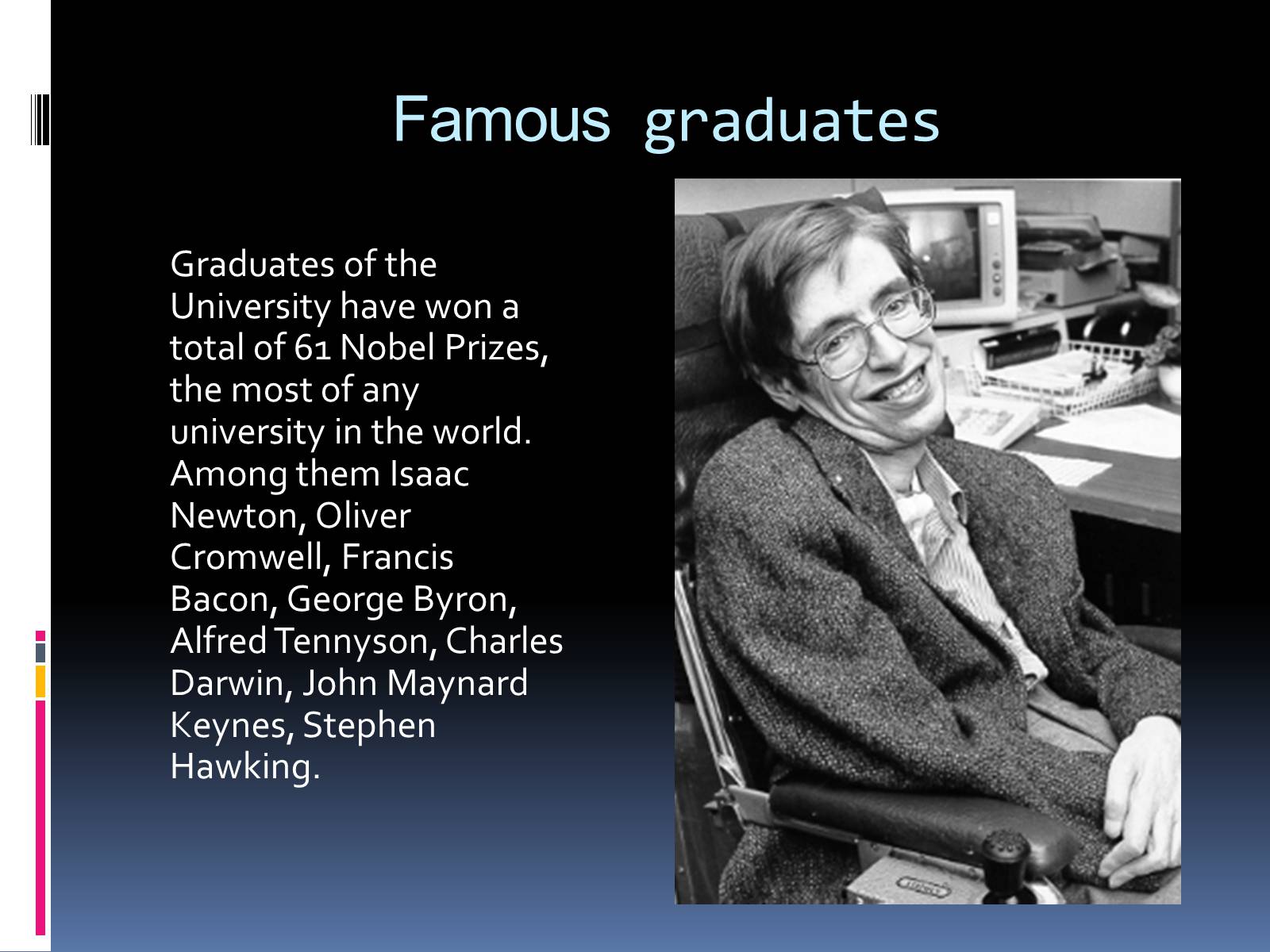 Contributions to the advancement of science
Understanding the scientific method, by Francis Bacon
The laws of motion and the development of calculus, by Sir Isaac Newton
The development of thermodynamics, by Lord Kelvin
The discovery of the electron, by J. J. Thomson
The splitting of the atom, by Ernest Rutherford and of the nucleus by Sir John Cockcroft and Ernest Walton
The unification of electromagnetism, by James Clerk Maxwell
The discovery of hydrogen, by Henry Cavendish
Theory of Evolution by natural selection, by Charles Darwin
Mathematical synthesis of Darwinian selection with Mendelian genetics, by Ronald Fisher
The Turing machine, a basic model for computation, by Alan Turing
The structure of DNA, by Rosalind Franklin, Francis Crick, James D. Watson and Maurice Wilkins, the later three awarded the Nobel Prize.(Rosalind Franklin didn't receive the Nobel Prize as it was not given posthumously)
Pioneering quantum mechanics, by Paul Dirac 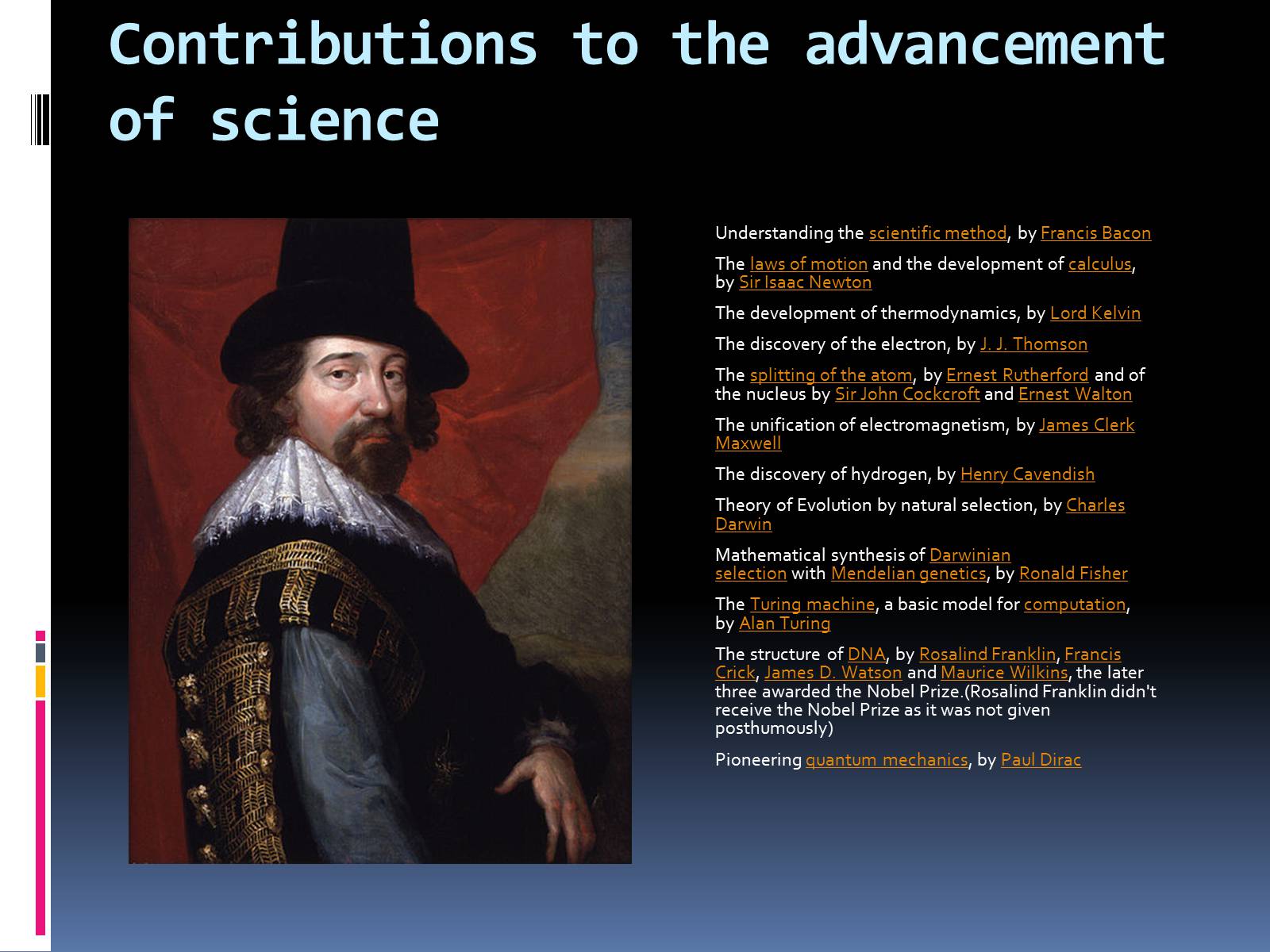 Women's education
Initially, only male students were enrolled into the university. The first colleges for women were Girton College (founded by Emily Davies) in 1869 and Newnham College in 1872 (founded by Anne Clough and Henry Sidgwick), followed by Hughes Hall in 1885 (founded by Elizabeth Phillips Hughes as the Cambridge Teaching College for Women), New Hall (later renamed Murray Edwards College) in 1954, and Lucy Cavendish College. The first women students were examined in 1882 but attempts to make women full members of the university did not succeed until 1947. 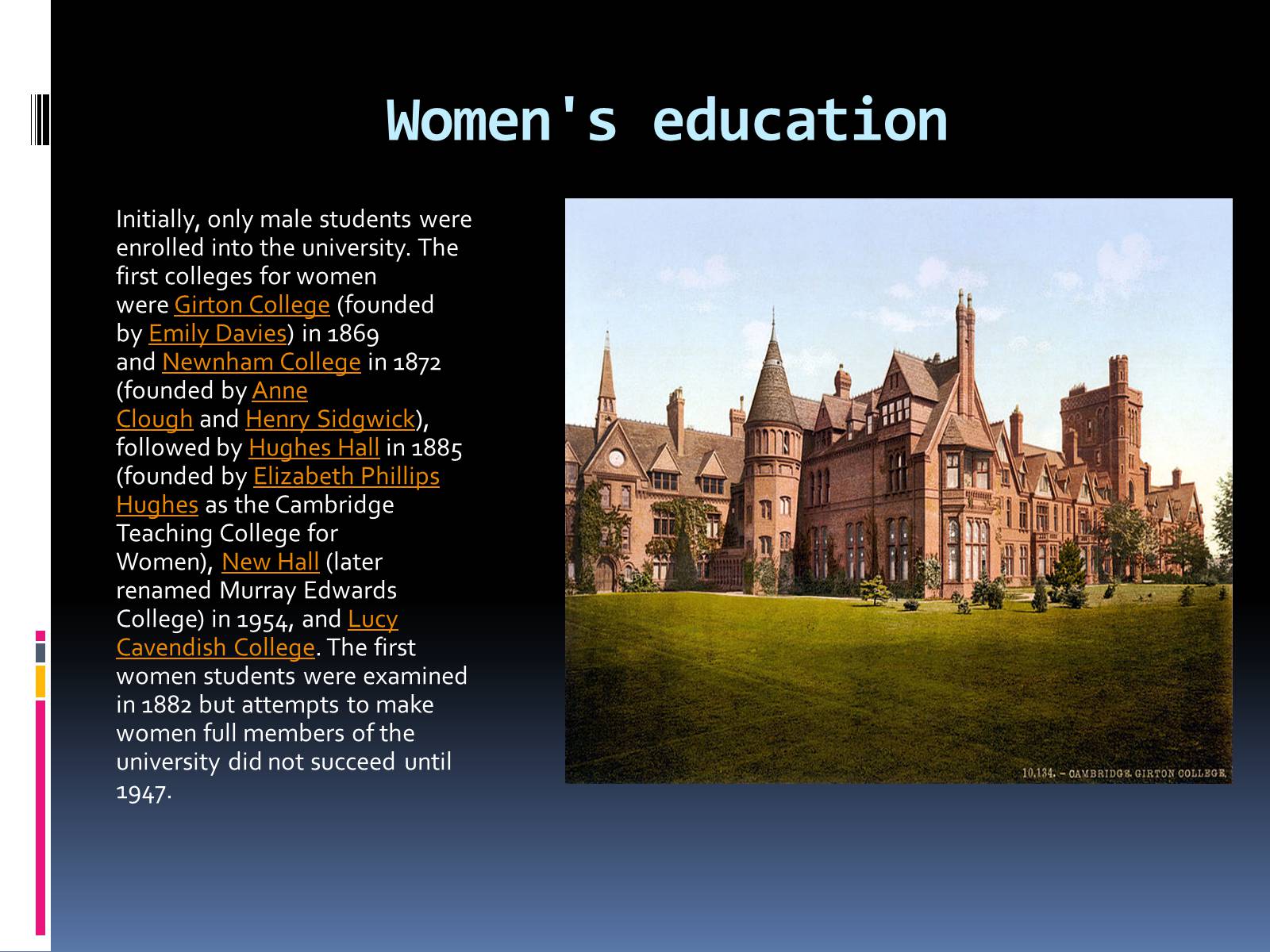 Myths, legends and traditions
A discontinued tradition is that of the wooden spoon, the ‘prize' awarded to the student with the lowest passing grade in the final examinations of the Mathematical Tripos. The last of these spoons was awarded in 1909 to Cuthbert Lempriere Holthouse, an oarsman of the Lady Margaret Boat Club of St John's College. It was over one metre in length and had an oar blade for a handle. It can now be seen outside the Senior Combination Room of St John's. Since 1909, results were published alphabetically within class rather than score order. This made it harder to ascertain who the winner of the spoon was (unless there was only one person in the third class), and so the practice was abandoned. Myths, legends and traditions
Each Christmas Eve, BBC radio and television broadcasts The Festival of Nine Lessons and Carols by the Choir of King's College, Cambridge. The radio broadcast has been a national Christmas tradition since it was first transmitted in 1928 (though the festival has existed since 1918). The radio broadcast is carried worldwide by the BBC World Service and is also syndicated to hundreds of radio stations in the USA. The first television broadcast of the festival was in 1954. 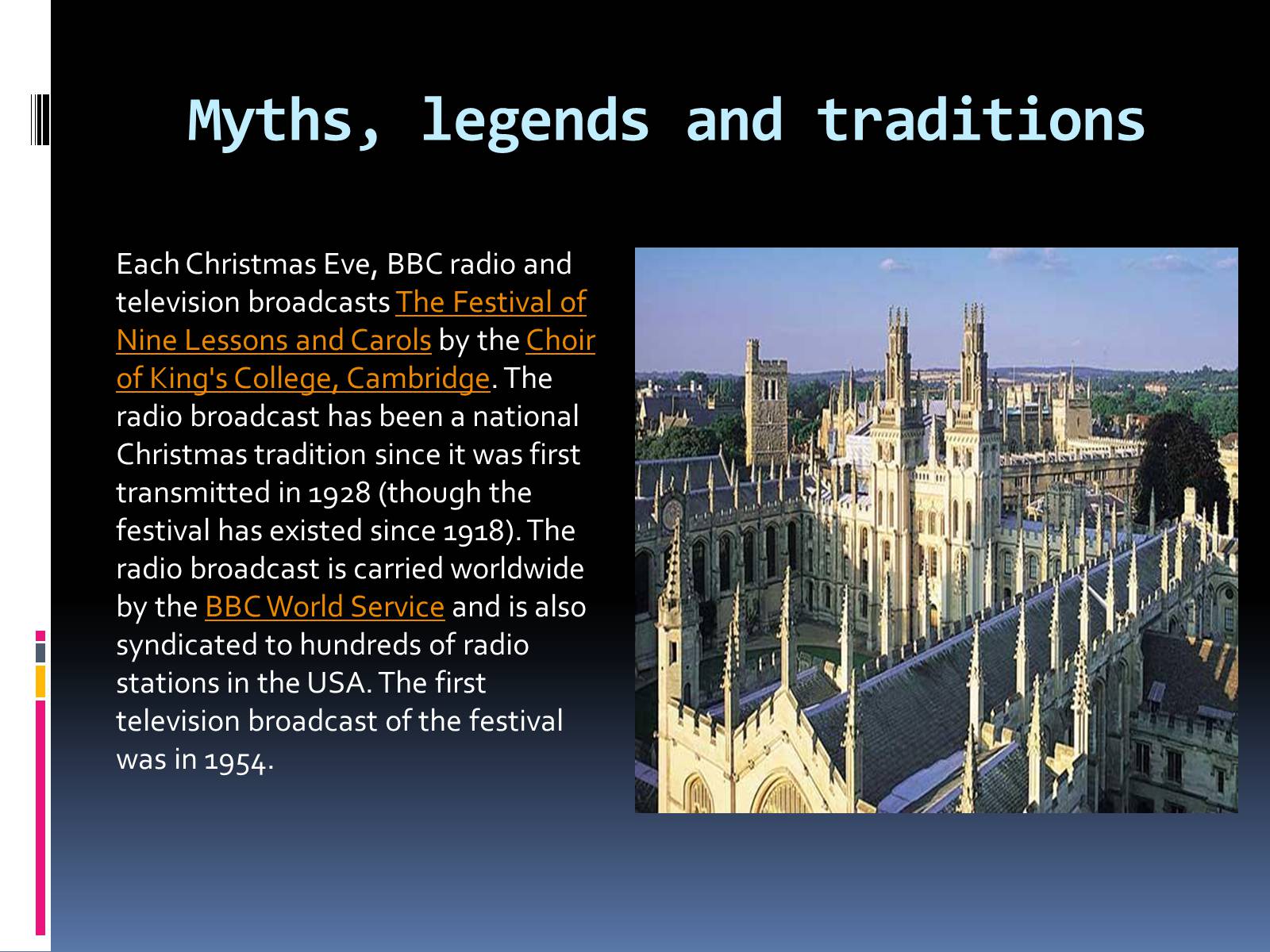 Organisation
Cambridge is a collegiate university, meaning that it is made up of self-governing and independent colleges, each with its own property and income. Most colleges bring together academics and students from a broad range of disciplines, and within each faculty, school or department within the university, academics from many different colleges will be found. 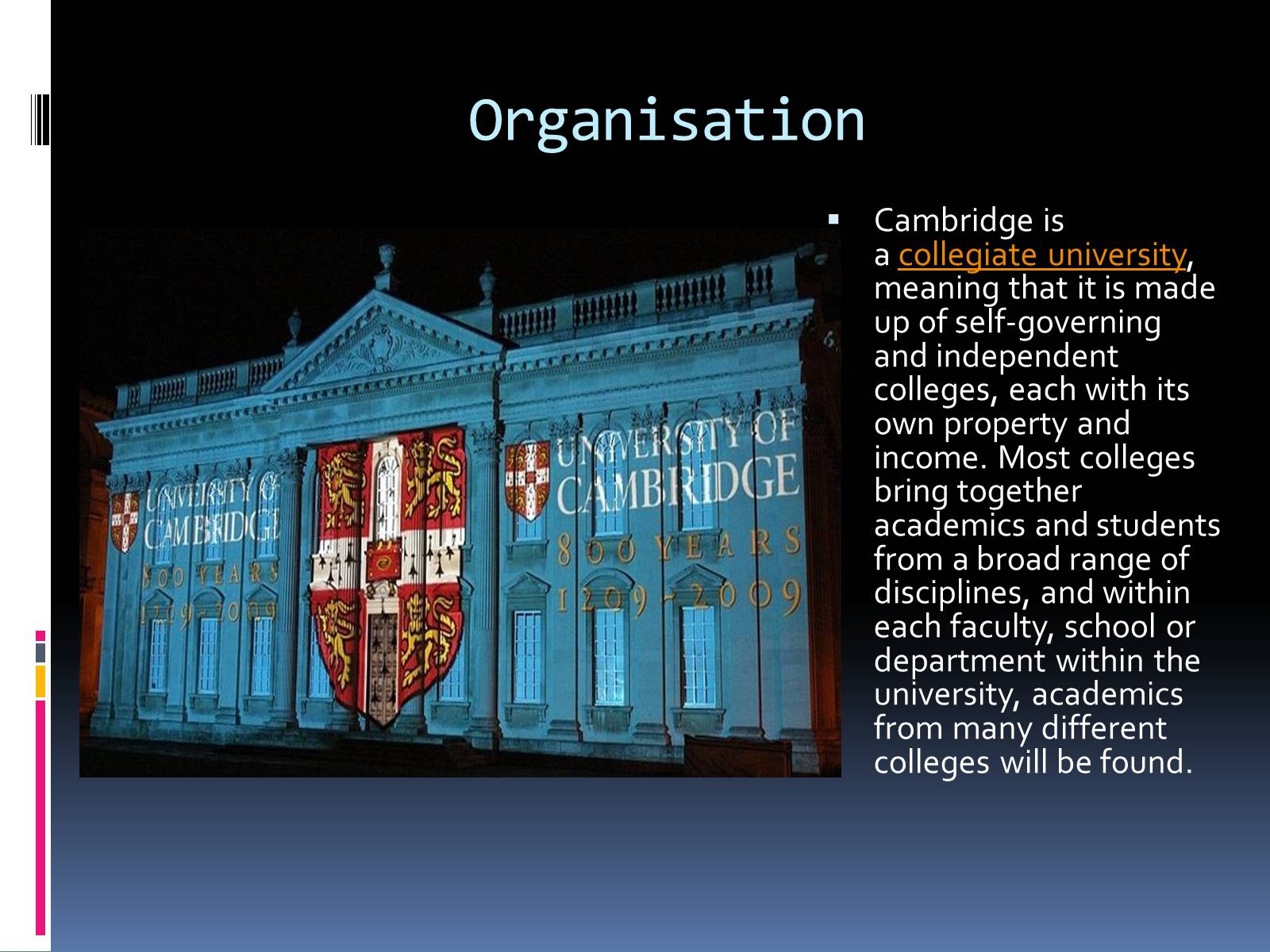 Colleges
The colleges are self-governing institutions with their own endowments and property, founded as integral parts of the university. Cambridge has 31 colleges, of which three, Murray Edwards, Newnham and Lucy Cavendish, admit women only. 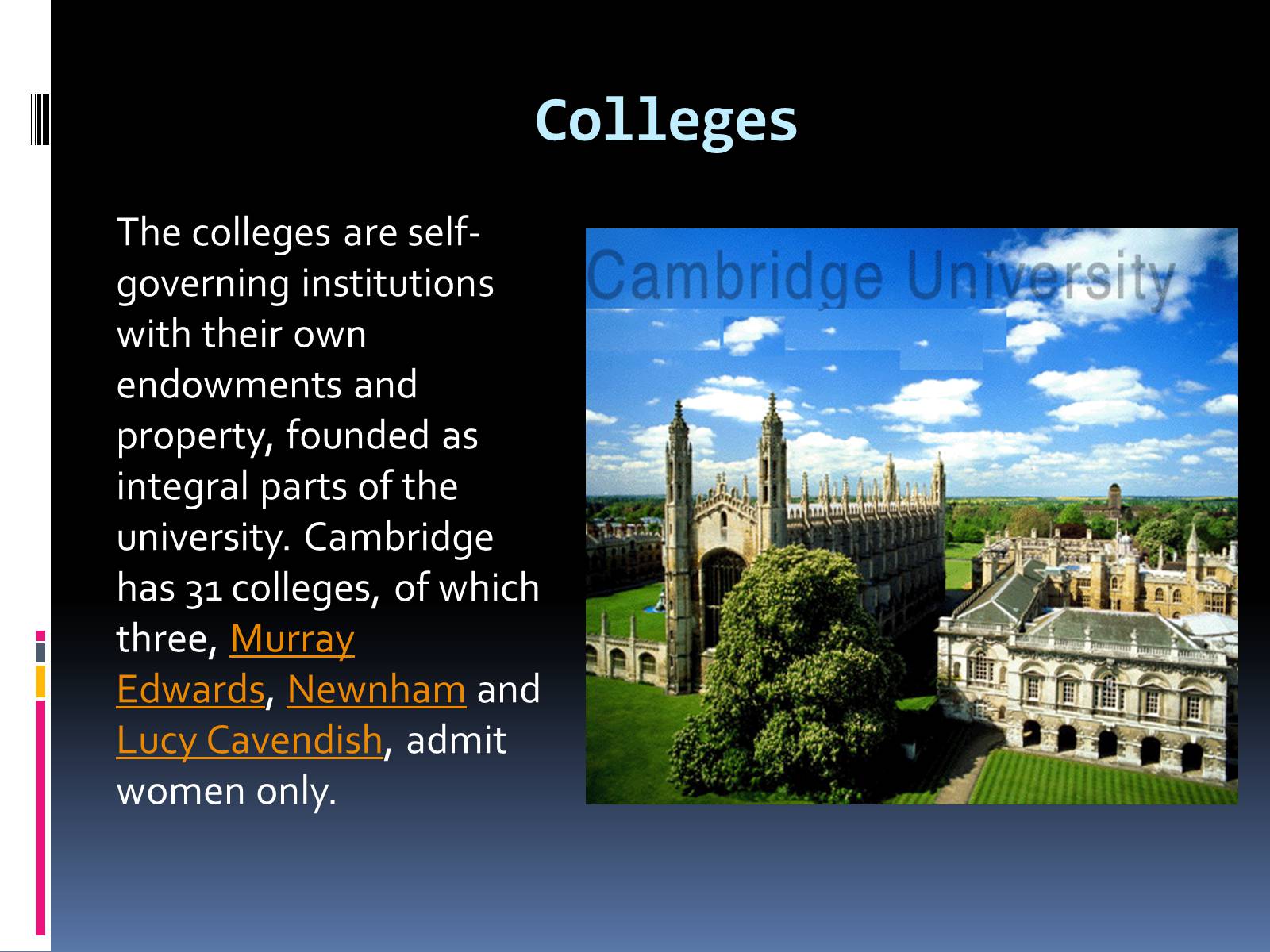 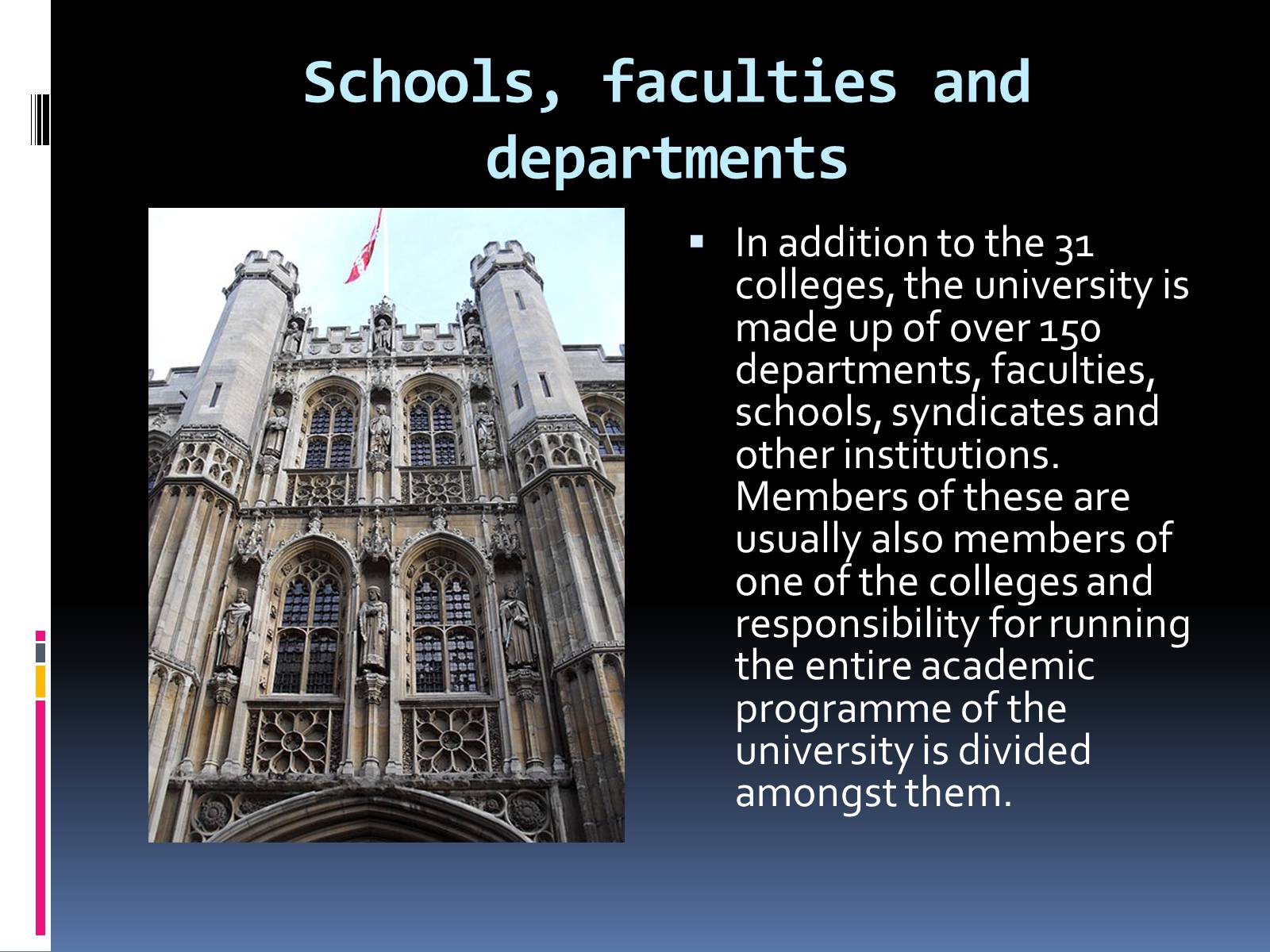 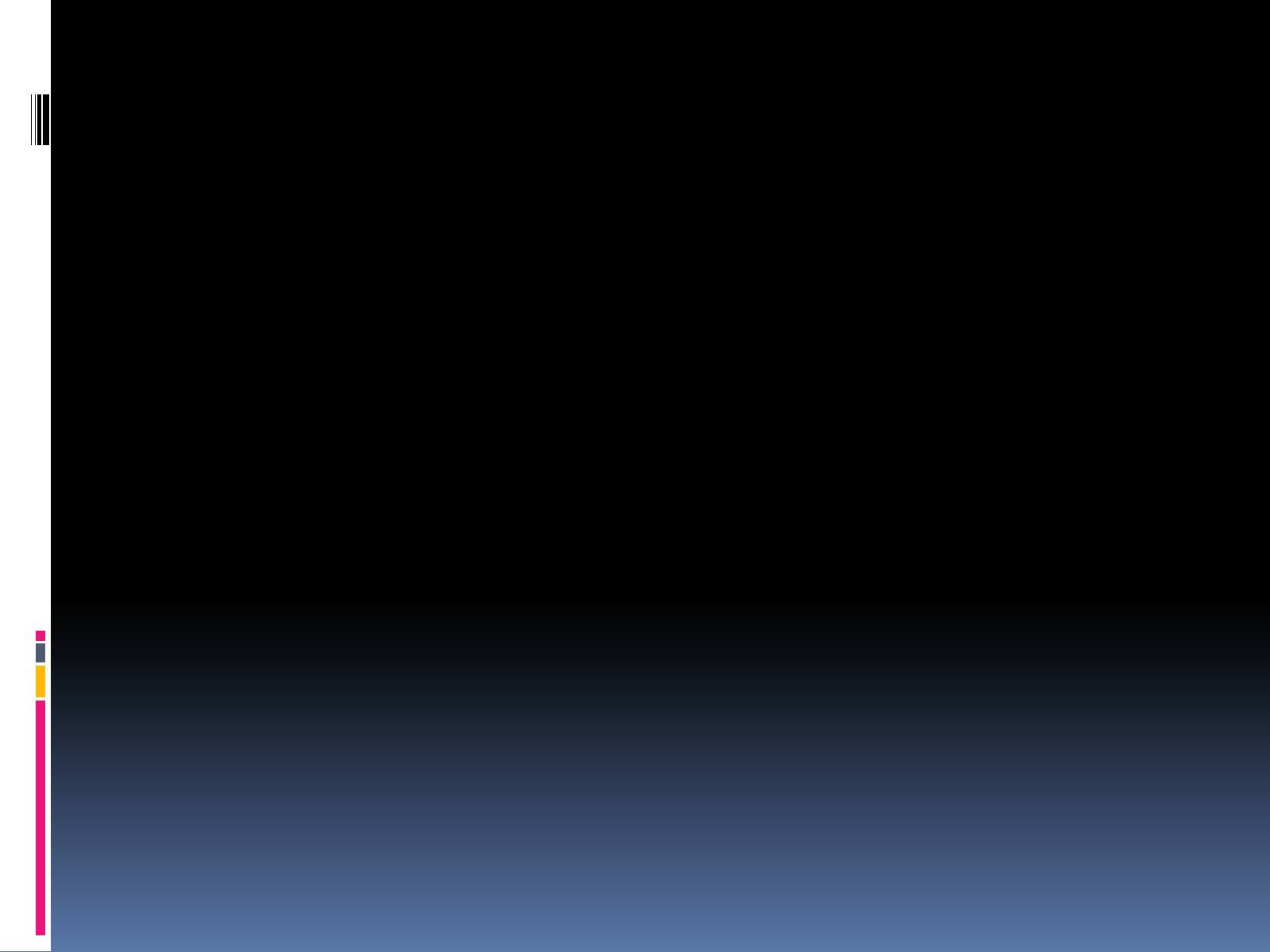